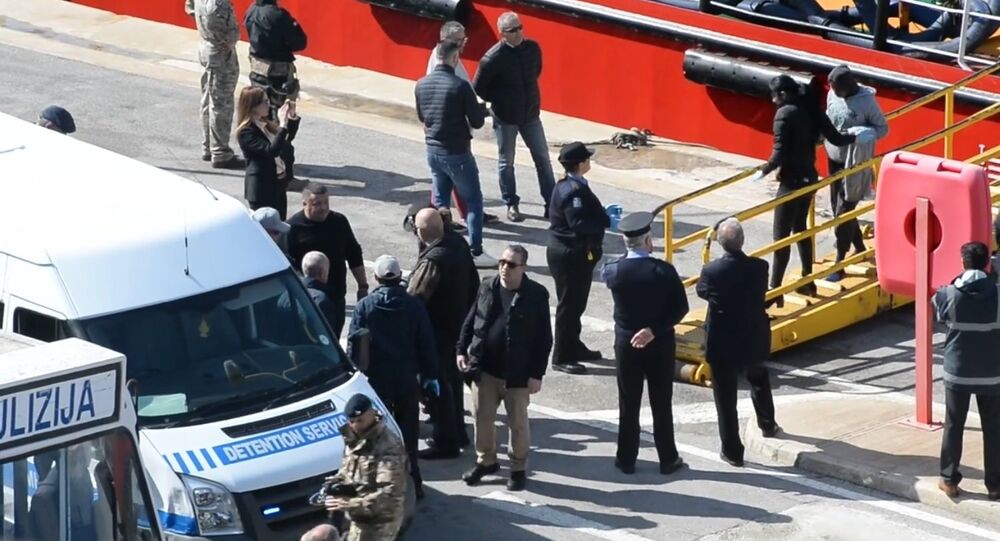 On Thursday morning, the Maltese Armed Forces stormed the vessel and detained five migrants suspected of leading the hijacking after the ship docked in the capital Valletta.

The captain of an oil tanker which was hijacked by migrants in Libyan waters earlier this week said that the hijackers began to batter the ship with metal rods and threatened crew members after they realised they were being returned to Libya.

“They attacked the cockpit, heavily beating on the doors and the windows and they threatened to smash the boat. They went nuts and they were screaming and shouting: ‘Go back! Go back! Go back!’” Nader el-Hiblu said.

READ MORE: 'Europe is Flooded With Migrants' Due to Politics of the West — Czech Politician

The 42-year-old admitted that he and five other crew members feared for their lives after what they described as the “horror” on board the vessel.

“They all brought heavy metal tools and started to beat and smash the ship and threatened that they would leave the ship in pieces” if the vessel returns to Libya. I didn’t care much about the boat, but the crew members”, el-Hiblu added.

He recalled that the hijacking took place after he took about 98 refugees on board and then directed his ship to Libya, saying that the migrants believed they were headed to Europe and “were relaxed and happy and did nothing throughout the journey”.

After the migrants went on smashing spree, el-Hiblu called a Libyan port and told them the crew was heading toward Europe because “they are going to kill me and kill us if we return”.

READ MORE: Activist: 'The More Migrants That Europe Takes, The Less Safe Europeans Will Be'

Earlier this week, media reports said that a merchant ship had been hijacked by migrants it had rescued in the Libyan waters and that the vessel was heading toward Malta but would not be allowed to enter Maltese territorial waters.

© AP Photo / Petros Giannakouris
Hungarian PM Believes Migration Crisis in Europe May Return With Renewed Vigour
The drama ended on Thursday morning, when five migrants suspected of leading the hijacking were detained by the Maltese Armed Forces as the ship docked in a Valletta port.

The development came as the EU has been experiencing a massive migration crisis since 2015 due to the influx of hundreds of thousands of refugees fleeing their home countries in the Middle East and North Africa.

WATCH African Migrants Trying to Reach Europe Inside of Mattresses

Ankara Prevented Over 14,000 Migrants From Illegally Entering Europe in 2018