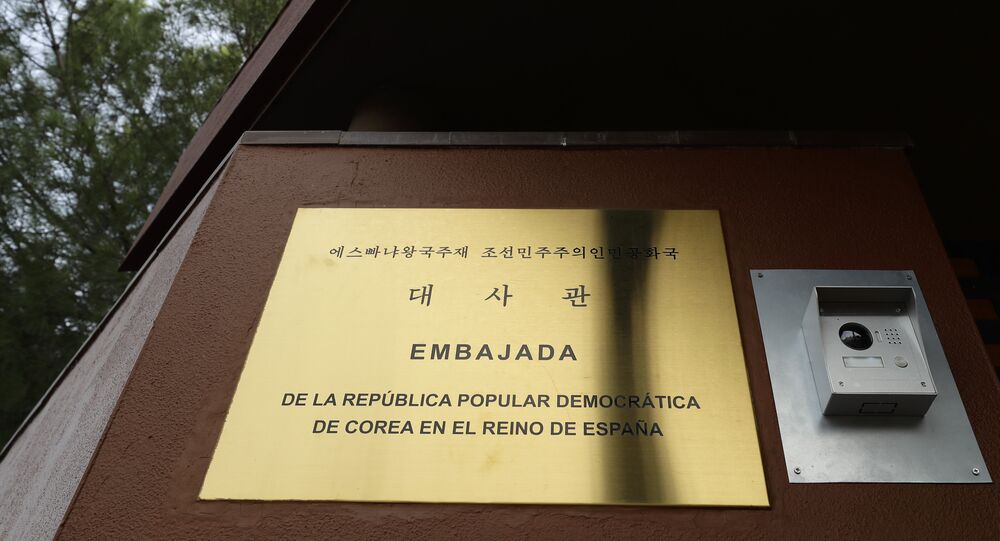 In February, Spanish media reported that a group of unknown individuals broke into the North Korean Embassy in Madrid, took diplomatic staff hostage for several hours, and seized their computers.

Spain's High Court said on Tuesday that the alleged leader of the unidentified group who entered the North Korean Embassy in Madrid had contacted the FBI to offer stolen data just days after the incident that took place on 22 February, Reuters reported, citing an official document.

The court named Adrian Hong Chang, a Mexican national, as the suspected leader who "entered in contact with the FBI in New York five days after the assault to facilitate information related to the incident in the embassy", adding that he told the FBI he had acted on his own initiative.

The intruders reportedly included citizens of Mexico, the United States, and South Korea.

There's no immediate comment on the matter from the United States.

Earlier this month, El Confidencial newspaper reported that US intelligence agencies may have been behind the attack on the mission, during which a group of unknown individuals broke into the embassy, took diplomatic personnel hostage and seized their computers. The media outlet said that Spain's National Police and the foreign intelligence unit of the National Intelligence Centre (CNI) were looking into all possible versions of what had happened.

CNI allegedly suspected that the way the diplomatic premises were attacked resembled the "method of work" of US intelligence services during secret ops.

The newspaper further cited embassy staff as telling investigators that some intruders spoke Korean and could be nationals of South Korea, a "US strategic ally".

In a parallel development, El Mundo newspaper reported that Spanish police had discovered rifles and several pieces of short-barrelled weapons during their searches in the embassy following the incident.

© CC BY-SA 3.0 / Gryffindor
Spain 'Disgraces' Itself by Expelling North Korean Envoy on 'US Order'
According to the newspaper, the assailants attempted to get some information about ex-North Korean Ambassador to Spain Kim Hyol Chol, who was expelled from the European country in 2017.

Reports of the incident emerged in Spanish media, with news outlets saying that the intruders handcuffed embassy employees and beat them while Charge d'Affaires ad interim Yu Sok So was taken to a separate room for questioning. One of the staffers managed to escape and contact the police, the reports suggested.

Several days after the incident, South Korean Ambassador to Spain Chun Hong-jo stressed that his government had no links to the intrusion.