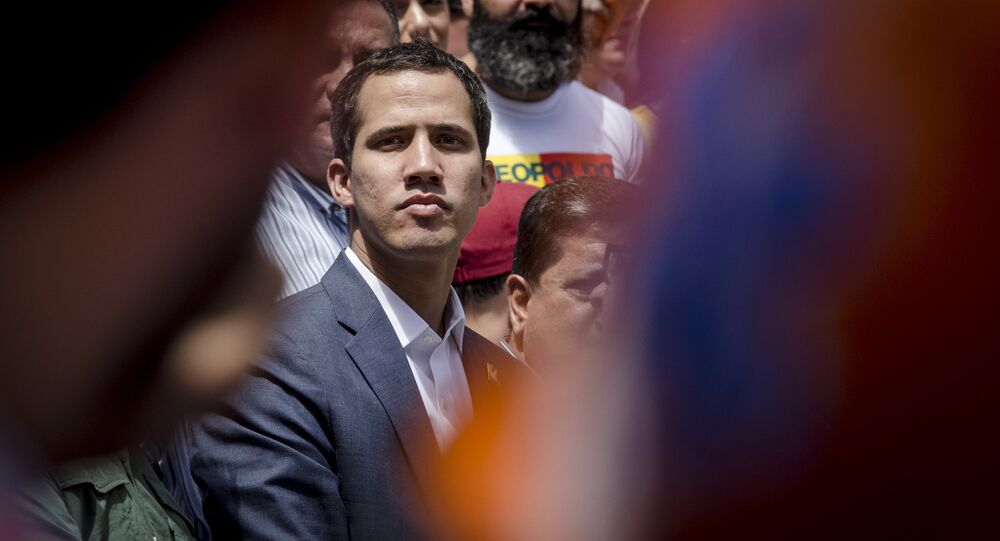 On Thursday, Venezuelan opposition leader and self-proclaimed president Juan Guaido made it plain that “all options” remain on the table to force the country’s government of President Nicolas Maduro to resign.

The US sees opposition leader Juan Guaido as Venezuela’s acting president but admits that he does not have real power because President Nicolas Maduro did not resign, US Special Representative for Venezuela Elliott Abrams told a news briefing on Friday.

He referred to the developments on 23 January, when Guaido was declared “interim president” by Venezuela’s National Assembly, in line with Article 233 of the country’s constitution which limits the interim president’s authority to 30 days.

When asked to explain the article under which Guaido declared himself interim and which expired last month, Abrams cited the National Assembly’s resolution that “states that that 30-day period of interim presidency will not start ending or counting until the day Nicolas Maduro leaves power”.

“So the 30 days doesn’t start now, it starts after Maduro”, Abrams noted.

“We’re taking the National Assembly is the only legitimate democratic institution left in Venezuela, and their interpretation of the constitution, as you know, is that as of the date of this alleged term for Maduro, the presidency is vacant”, Abrams said.

When asked whether Guaido can be called “the interim president of an interim that doesn’t exist yet”, Abrams said that the 30-day end to Guaido’s interim presidency starts counting and that the problem is that “he’s not in power”.

“So they have decided that they will count that from when he actually is in power and Maduro’s gone. I think it’s logical. He [Guaido] is interim president, but he’s not able to exercise the powers of the office because Maduro still is there”, Abrams pointed out.

After. when asked to clarify the National Assembly’s “interpretation”, Abrams reiterated that Venezuela’s constitution “requires a 30-day interim period, but those 30 days should not be counted while Maduro is still there exercising the powers of his former office”.

Abrams’ remarks came after Guaido told the El Pais newspaper that for Venezuelan opposition, “the responsible thing to do is discuss all options” so as to prod Maduro to step down.

On a possible foreign intervention, Guaido said that this was “a controversial option”, and that “99.9%” of people around the world would choose peace over war."

© AP Photo / Fernando Llano
'The US is Very Isolated in Its Approach to Venezuela' - Campaigner
He added that the opposition “expects more” of the military to join him and “stand on the side of the Constitution”.

Shortly after Guaido declared himself interim president in late January, he was immediately recognised by the US, Canada, and many of Washington's Latin American and European allies.

The Venezuelan government described the opposition's move as an attempted coup. Russia, China, Bolivia, Cuba, Iran, Syria and about a dozen other countries rejected Guaido's takeover bid, and urged other powers not to interfere in Venezuela's internal affairs.