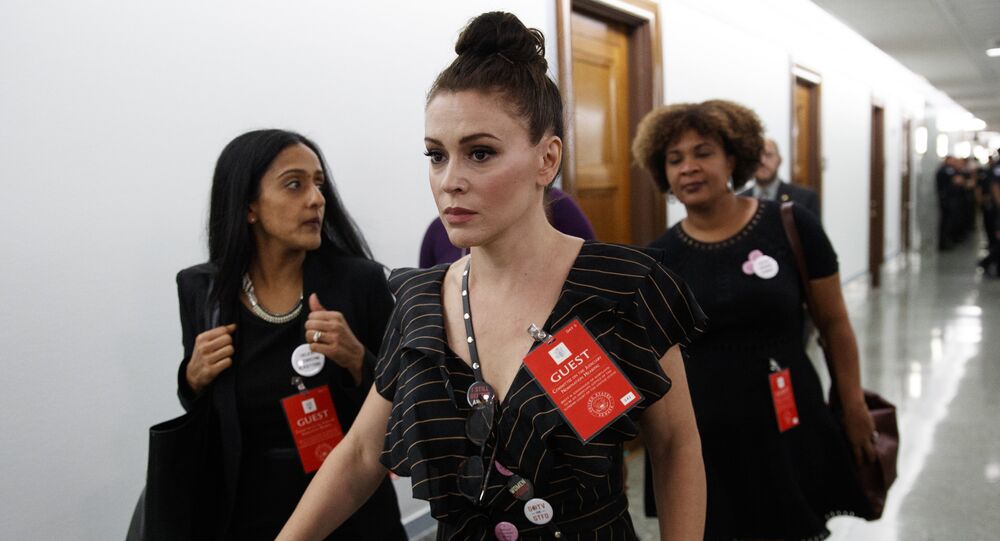 'I Identify as Hippo': Alyssa Milano's 'I am a Gay Man' Tweet Mocked by UK Host

The former “Charmed” star landed in hot water after she shared a tweet in celebration of International Women’s Day to address her “transgender sisters” before saying that she is “everything” when one netizen questioned whether she herself was transgender.

Good Morning Britain presenter Piers Morgan has mockingly said that he identified as a hippopotamus while ridiculing Alyssa Milano’s all-inclusive tweet, in which she wrote she was a “gay man”, “a person of color”, “trans”, “the disabled” among several other categories.

“She’s obviously morally superior to all of us. She wants to attach herself to every known possible group out there who may need her patronising support. […] If you can self-identify then we can all be anything. So I therefore identify as a hippopotamus, does that make me a hippopotamus? No”, he said.

The actress’s tweet spurred much controversy on the internet, with many blasting her words as “absurd”, while she herself was called “delusional”.

I’m everything. And so are you, Kirk.

Don’t be afraid of what you don’t know or understand. No one wants to hurt you. We are all just looking for our happily ever after. https://t.co/znkQizV37k

Responding to her critics, Milano tweeted that she was glad that the post had “invoked conversation”, and stressed that she “can identify with and not identify as”.

I’m glad this tweet invoked conversation. I’m so sorry it offended some. I see you and hear you. But just a reminder, empathy is not a bad thing. Nuance is important and literal interpretation is not always intended. And I can identify with and not identify as. Both are powerful.

Milano has become increasingly involved in politics and activism in light of the anti-harassment movement, #MeToo. In particular, she dove into the spotlight when she attended a Senate Judiciary Committee hearing for then-Supreme Court nominee Brett Kavanaugh, who was accused of sexual assault committed in the 1980s by three different women.

READ MORE: 'You're Delusional': Alyssa Milano Ripped Over Bizarre 'I am a Gay Man' Tweet

Alyssa was actively campaigning against Kavanaugh and accused him and President Donald Trump of being the reason why “sexual abuse has been institutionalised in the country”. The committee, however, ruled that the FBI had found “no hint of misconduct” in its investigation into the claims.