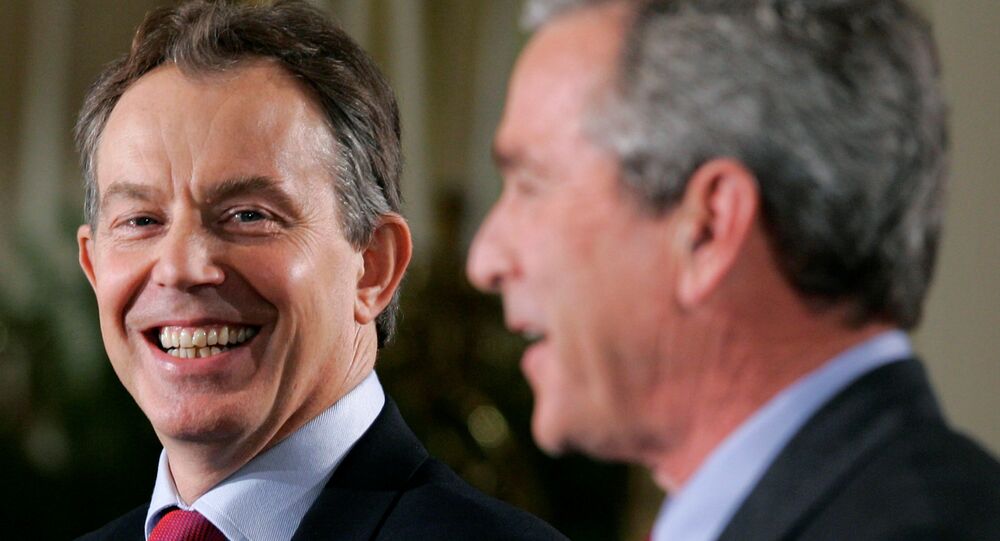 The WikiLeaks Defense Fund is backed by The Courage Foundation, an international organisation which "supports those who risk life or liberty to make significant contributions to the historical record", and "campaigns for the protection of truthtellers and the public’s right to know".

The WikiLeaks Defense Fund has re-published a number of cables shedding light on the true nature of British foreign policy under the premierships of Tony Blair and Gordon Brown. Some of the most revealing — and damning — relate to the ‘special relationship' between London and Washington, which in practice evidently equates to British subservience to American interests.

The depth of this deference — and Washington's apparent indifference to the ‘special relationship' — is starkly underlined by a February 2009 document, in which Richard LeBaron, charge d'affaires at the US embassy in London, notes "the UK's commitment of resources — financial, military, diplomatic — in support of US global priorities remains unparalleled", but the UK media, public and politicians alike feared the then-new Barack Obama administration had downgraded the country's value.

"British media are busy over-reading perceived signals for evidence of tensions in the relationship. This…would be humorous, if it were not so corrosive. Much was made in the British press — and even by serious HMG officials — of the "fact" the new President's inauguration speech mentioned the UK only in the context of the British "enemy" harrying George Washington's troops — although some noted…Obama's 7,000-word essay setting out his foreign policy intentions…did not mention the UK at all. [Hillary] Clinton's statement before the Senate Foreign Relations Committee was similarly parsed and much was made of the fact the UK was fourth in a recitation of US allies (and it was particularly painful Germany and France were named first)," he states.

Such obsequy is also amply demonstrated in the UK's collusion with the US to prevent indigenous inhabitants of the Chagos Islands from returning to their homeland following their forcible removal in the 1960s, and maintain the giant US military base Diego Garcia on the archipelago through whatever means necessary. A 2009 US embassy cable details one such scheme — the UK Foreign Office suggested establishing a "marine park" or "reserve" around the British Indian Ocean Territory (BIOT), which includes Chagos.

"A senior FCO official [insists] the establishment of a marine park — the world's largest — would in no way impinge on US use of the BIOT, including Diego Garcia, for military purposes. He agreed the UK and US should carefully negotiate the details of the marine reserve to assure US interests were safeguarded and the strategic value of BIOT was upheld. He said the BIOT's former inhabitants would find it difficult, if not impossible, to pursue their claim for resettlement on the islands if the entire Chagos Archipelago were a marine reserve," the cable states.

In a landmark ruling 25 February, the International Court of Justice ruled "the UK has an obligation to bring to an end its administration of the Chagos archipelago as rapidly as possible, and all member states must cooperate with the United Nations to complete the decolonization of Mauritius". Whitehall has already made clear it has no intention of respecting the Court's decision.

Cables elsewhere reveal Diego Garcia is also home to a vast cache of cluster munitions, weapons long-banned under international law, with the US stating the bombs were "legitimate weapons that provide a vital military capability".

Both British and American officials took steps to shield themselves and each other from scrutiny over the Iraq War. In the UK, the Chilcot Inquiry was undermined from the outset by the then-incumbent Brown government.

As the investigation was launched in 2009, then-Ministry of Defence Director for Security Policy Jon Day wrote to US officials assuring them "measures" had been put in place to "protect your interests". While the exactitudes were not disclosed, it's notable no US officials were called to give evidence to the inquiry publicly, with a few merely interviewed anonymously in private during visits by inquiry staff to the US — and the inquiry was also precluded from publishing letters between Bush and Blair dating to 2002, even though the correspondence was referred to in evidence.

However, such subservience is rendered all the more dubious given WikiLeaks cables expose how the US spied on UK government ministers and departments such as the Foreign Office.

In one particularly striking document, following the appointment of Ivan Lewis as junior foreign minister in 2009, then-Secretary of State Clinton expressed appreciation for the insight provided to her office on Lewis' "bullying, possible depression and scandals", considering "comments on the state of his marriage and how the Jewish community saw his appointment" to be "particularly insightful".

"We would greatly appreciate additional information, especially regarding how Lewis works with Foreign Secretary [David] Miliband and the FCO staff, assessments of Lewis' performance in office, and information on his political goals, as time and resources permit," the cable reads.

Documents elsewhere indicate Washington also spied on the UK mission to the United Nations, along with other members of the Security Council and senior UN figures, including UN Secretary General Ban Ki-moon. A directive was also issued to US diplomats at Clinton's behest in July 2009, demanding forensic technical details about communications systems used by top UN officials, including passwords and personal encryption keys used in private and commercial networks for official communications.

"If Hillary had a chance to say something about [Blair] being a good President of the European Council if asked about it during her remaining time in Europe that would be [very] helpful. The Austrian Chancellor has said he doesn't want [Blair] because he was for [George] Bush rather than the new Democratic Administration. So something that indicated the new Administration would work with him — without trying to interfere in internal European processes — would be very helpful," he said.

In a subsequent note to Clinton, Blumenthal said European citizens "might take offense at a direct US endorsement, considering it an intrusion on a strictly EU only decision" but may be receptive to "nice words said by you about Blair without an explicit endorsement".

"The rap against him is he's ‘Bush's poodle' and your positive comments would help erase that taint. You can have a member of the press ask you about the Austrian comment about Blair or simply about the EU presidency. Then you can say this is a decision reserved for EU members but you have strong and positive feelings about Blair as an experienced and skilled statesman who has proved he is devoted not only to Europe but also to strengthening the Transatlantic partnership," he wrote.