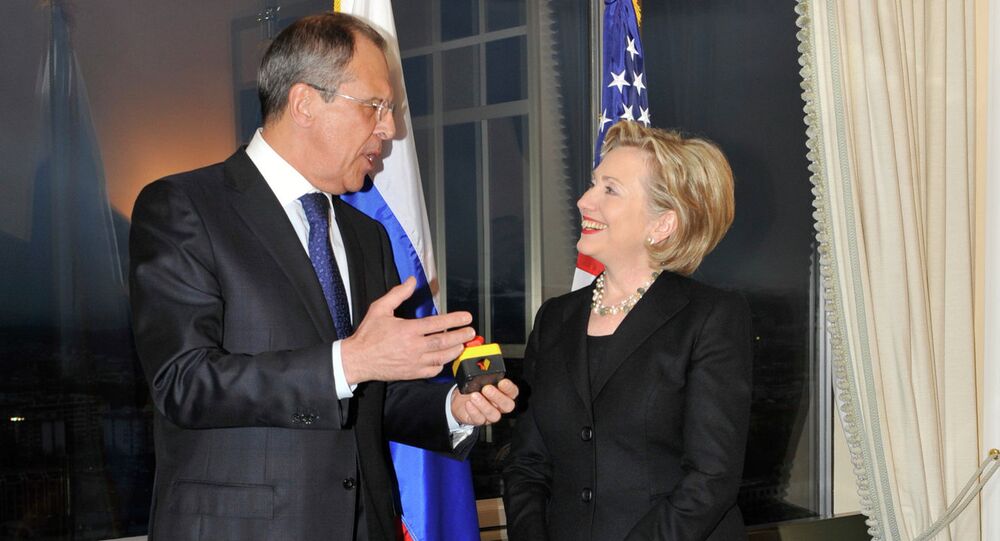 Wednesday marked the tenth anniversary of Foreign Minister Sergei Lavrov and former Secretary of State Hillary Clinton's ill-fated 2009 attempt to "reset" cooling relations between Russia and the US.

Petr Barulin, deputy head of the Museum of History of the Russian Diplomatic Service, recalled the details of the 6 March 2009 meeting between Clinton and Lavrov for Sputnik.

"It happened in Geneva, home to some rather successful negotiations in the past. After eight years, these talks were so fruitful that the foreign ministers of both countries smiled at one another," Barulin said.

Unfortunately, with the button, "the American translators got it wrong. Here, in Latin script, they wrote 'Peregruzka' ('Overload') instead of 'Perezagruzka' ('Reset'), which are not one and the same. Peregruzka, of course, is something that happens in electrical networks, leading to blown fuses, or even a fire."

After being informed of the error by Lavrov, Clinton cleverly maneuvered herself out of the awkward situation, Barulin noted. "She said that while she and Lavrov really were working on a 'reset', they were working so hard that they were 'overloaded' with work."

Lavrov and Clinton pushed the button for the cameras, despite the mistake, Barulin recalled. This was seen as an important symbolic moment against the background of ongoing negotiations "on many pressing issues – the South Caucasus, Afghanistan, the Korean Peninsula," he said. "In general, the two countries made efforts to meet one another halfway, and supported each other. What happened after is something we all know," he concluded.

In 2009, amid lingering tensions over the 2008 Georgia War, which saw Russian troops step in to stop a Georgian military operation against the breakaway regions of Abkhazia and South Ossetia following the deaths of Russian peacekeepers, the Obama administration proposed the concept of a 'reset' with Moscow. The idea was first proposed by Vice-President Joe Biden at the 45th Munich Security Conference in February 2009.

The idea was followed up by President Obama's visit to Moscow in July 2009, with multiple agreements on Russia-US cooperation discussed, and successful strategic arms limitations talks held, leading to the signature of the START-3 (New START) Treaty in April 2010. Warming relations were aided by Russia allowing NATO aircraft to fly through Russian territory to supply its forces in Afghanistan, the two countries' cooperation against terrorism and maritime piracy, and agreements on drug enforcement officer training, adoptions, and civilian nuclear energy. With US help, Russia joined the World Trade Organisation in August 2012 after nearly two decades of negotiations.

However, tensions began to creep back up again over the US' missile shield plans in Europe. In addition, Secretary Clinton's decision to personally support street protests in Moscow in the aftermath of elections to Russia's parliament in late 2011-early 2012, as well as Washington's move to intervene in Libya to overthrow Libyan leader Muammar Gaddafi, began to shake Moscow's trust in its US partner.

In 2012, while Russia's parliament adopted the Dima Yakovlev law on adoptions of Russian children by Americans, the US Congress passed the 'Magnitsky Act' against alleged Russian human rights violations. Tensions were exacerbated further in 2013, when NSA whistleblower Edward Snowden fled the US and ended up in Russia, with Moscow refusing to extradite him and opting to grant him residency.

The US-backed colour revolution in Kiev, which led Crimea to break off from Ukraine and rejoin Russia after a peninsula-wide referendum, saw tensions escalate further, with the US and its allies slapping Moscow with several rounds of sanctions and beefing up NATO's military presence in Eastern Europe along Russia's borders.

Igor Ivanov, who served as foreign minister under President Yeltsin and the first two years of President Putin's first term, told Sputnik that the failure of the reset demonstrated that Russia and the US were just "unprepared" to carry out a fundamental review of their relations in a bid to abandon the logic and mentality of the Cold War.

"The problem," Ivanov said, was that Moscow and Washington "proclaimed a reset, we could not back it up with the appropriate political and legal base which reflected the profound changes taking place in the world and our countries. Or we just didn't have enough time."

© Sputnik / Alexei Danichev
'As Soon as New START Expires, US Could Return to All Arsenal' - Source
Andrei Sidorov, a professor at the Moscow State Institute of International Relations, Russia's top diplomatic training school, said that the 'reset' may have been doomed from the start thanks to the derisive mindset which Washington adopted toward Moscow in the 1990s, when Russia became seen as a country "which could not do anything" to resist US policy.

"The Americans saw Russia as a country which was unlikely to be able to step out against" US policy, Sidorov recalled. And after Putin's election, the US felt that Russia had begun to "carry itself in a way that's not exactly the way the US would like," with the reset aimed at putting Moscow back "on the path it was in the 1990s."

For his part, Alexei Arbatov, the director of the Institute of World Economy and International Relations in Moscow, told Sputnik that whatever the aims of the 2009 reset may have been, today relations seem likely to get worse before they get better. According to the expert, the two countries are on the verge of seeing the disintegration of the global arms control system, with the New START Treaty set to expire, with little hope that the Trump administration is prepared to negotiate an extension or a new treaty.