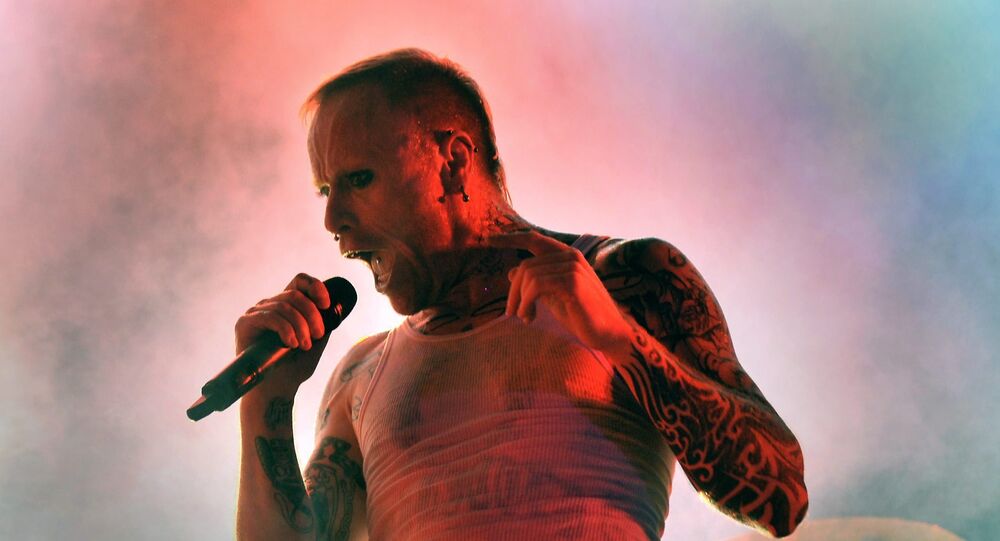 The tragic news of the 49-year-old legend’s passing has sent shockwaves around the world, since The Prodigy fans cannot fathom the reason behind his suspected suicide.

Keith Flint, the frontman of The Prodigy, is believed to have taken his own life just days after splitting from his wife, Japanese DJ Mayumi Kai and putting their beloved house, which he once described as his sanctuary, up for sale, UK tabloids claim, citing unnamed sources.

© AP Photo / Evan Agostini
Legendary Couturier Karl Lagerfeld Dies at Age of 85 - Reports
The English vocalist, who’s associated with the golden rave era, allegedly lost himself to depression after the devastating break-up with Mayumi, and may have started taking drugs again, sources assumed.

He had been open about his long struggle with alcohol, drugs and depression, and admitted that his wife “saved him”.

Speaking about the moment he first saw his future wife, Keith said that he was absolutely mesmerised:

“We were touring and she just walked into this room we were in, and you know how it is, I just couldn’t talk, I was overwhelmed”.

The couple married in 2006 and loved to spend time at their farmhouse, where they were leading a lifestyle that probably contradicted Keith’s wild stage image:

“We like to take picnics and sandwiches, driving through the green lanes. My wife loves the house, the dogs, and the animals we have around us, the deer and the fox that comes and pokes his head through the hedge”.

© AP Photo / Axel Seidemann
Prodigy Frontman Dies at Age of 49, Band Says it Was Suicide
After the two called it quits, the musician decided to sell the house: estate agents Anderson’s reportedly posted details of it last Friday, but removed them on Monday.

Keith’s death came 48 hours after he was photographed in the 5k Chelmsford Park run where he achieved a personal best time of 21 minutes 22 seconds – in what is believed to be his last picture.

In the past, the legendary musician was brutally honest about his life, saying that he would kill himself when he’s done with fame, while speaking with journalist Matt Blake.

"I’m not saving up for anything. I’m cashing it all now. I’ve always had this thing inside me that, when I’m done, I’ll kill myself. I swear to God that’s not suicidal – it’s definitely a positive thing. The moment I start s***ting the bed is when you’ll see me on the front of a bus".

Keith was found dead in his Essex house on Monday, with Liam Howlett, who formed The Prodigy in 1990, taking to Instagram to confirm the news and revealed that it was a suicide:

The news is true, I can’t believe I’m saying this but our brother Keith took his own life over the weekend, I’m shell shocked, fuckin angry, confused and heart broken….. r.i.p brother Liam #theprodigy

In a tweet, bandmates paid tribute to the “true pioneer, innovator and legend” Keith was:

It is with deepest shock and sadness that we can confirm the death of our brother and best friend Keith Flint. A true pioneer, innovator and legend. He will be forever missed.
We thank you for respecting the privacy of all concerned at this time. pic.twitter.com/nQ3Ictjj7t

Flint was one of the UK’s most iconic and recognisable musical figures with his double-mohawk hairdo, punk aesthetic of piercings, and shock-rock makeup. He performed the vocals on the band’s chart-smashing singles, Firestarter and Breathe, while The Prodigy became the first dance group to headline the Glastonbury Music Festival in 1997.