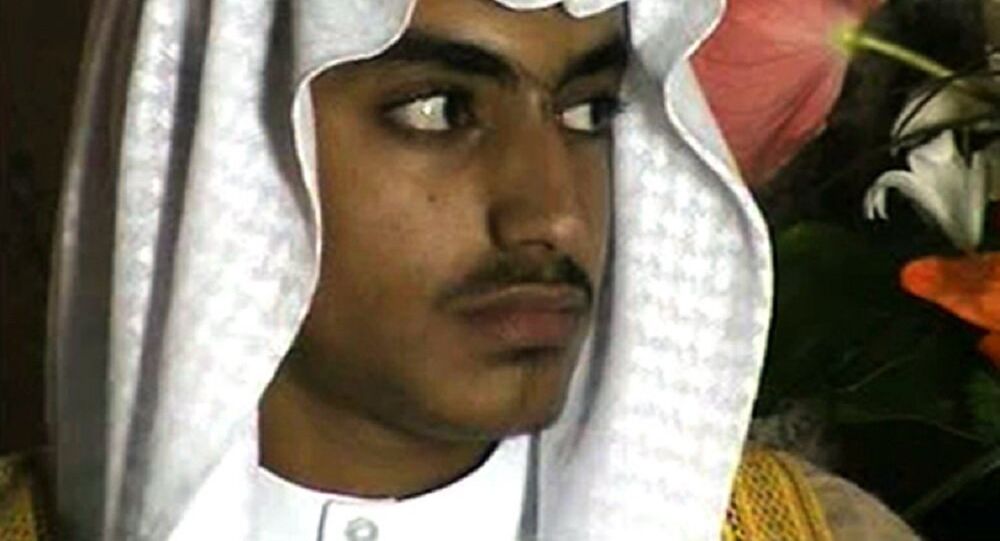 The US State Department has announced that it will offer a reward of "up to $1 million" for information leading to the capture of Hamza bin Laden, the 29-30-year-old son of infamous al-Qaeda leader Osama bin Laden. Sputnik has dug through the files to compile a list of the top five things you need to know about the aspiring terrorist leader.

Like his late father, who was killed by US Navy SEALs in a raid in a Pakistan suburb in 2011, Hamza is an aspiring terrorist leader. In a 2005 video, when he was just 14 years old, Hamza was shown participating in an al-Qaeda attack against Pakistani security forces in the Waziristan border region between Afghanistan and Pakistan. Two years later, a militant confirmed to AFP that Hamza remained in the region fighting alongside al-Qaeda militants, where he had advanced in rank.

Fast forward a decade to 2015-2016, and Hamza was releasing audio tapes encouraging jihadists worldwide to "unite the ranks of the mujahedin" to wage war in Syria, and calling for lone wolf attacks against Russians, Americans, Europeans, and Jews. In 2016, Hamza recorded a video address in which he vowed to take revenge against the US for killing his father.

© AP Photo / CIA
US Offers $1 Million Reward for Hamza bin Laden, Osama's Son
In late 2017, Hamza reportedly founded a new Islamist splinter cell known as the 'Jama'at Ansar al-Furqan in Bilad al Sham', an al-Qaeda allied terror group operating in northern Syria consisting of former Nusra Front and Daesh (ISIS) elements. The group reportedly participated in fighting in Syria's Idlib province, and declared war on just about everyone, from Syria and Russia to secular Arab governments in the Middle East, to Turkey, the US, the UK and Shia militias.

Dreaded by the Saudi Monarchy

In addition to his war against the Russian, Arab and Western enemies of jihad, Hamza, who was born in Jeddah in 1989, raised eyebrows in 2016 after calling for the overthrow of the Saudi monarchy. The appeal prompted Saudi authorities to denounce Hamza as a terrorist, and to stress that he was a Saudi only by birth, not by citizenship, having been stripped of the latter in 2016.

Designated a Terrorist by the US…But Kinda Late

© AFP 2020 / ABDULLAH DOMA
US MPs Force Trump Office to Comment on Reports About Arms Transfers to Al-Qaeda in Yemen
Despite his alleged participation in al-Qaeda operations since his teenage years, the US State Department was quite late in designating Hamza a terrorist, doing so only in January 2017. Hamza was classified as a so-called Specially Designated Global Terrorist (SDGT), a designation which would block any property bin Laden may have had in the US, restrict his movement and his ability to engage in economic activity with US nationals.

Even Has Terrorist Family Ties

In 2018, bin Laden's relatives told UK media that Hamza, already thought to be married to the daughter of high-ranking veteran al-Qaeda member Abdullah Ahmed Abdullah since 2006, had married the daughter of Mohammed Atta, the lead hijacker of the 9/11 terror attacks who personally flew a plane into the World Trade Center.

Two of bin-Laden's half-brothers, Ahmad al-Attas and Hassan al-Attas, said they had heard Hamza married the young woman, an Egyptian national presumed to be in her late teens or early 20s, possibly in Afghanistan. However, Omar bin Laden, the fourth son of the former al-Qaeda leader, denied the marriage, suggesting he remains married to his first wife.

© AP Photo / Militant website
Daesh's Downfall May Result in Al-Qaeda's Resurgence, MI6 Chief Warns
In recent years, intelligence experts have spoken about Hamza's potential role as a recruitment lightning rod for al-Qaeda amid its conflict with Daesh. Yoram Schweitzer, a senior fellow in the terrorism program at the Institute for National Security Studies in Tel Aviv, told Sputnik that Hamza was now "the most important remaining relative of bin Laden," and a "symbolic figure" in al-Qaeda's campaign to unify jihadists against Daesh.  "I think Hamza is trying to be presented as one of its true leaders, the military commander and public figure of al-Qaeda," Schweitzer said.

Al-Qaeda and Daesh (ISIS) are terrorist entities outlawed in Russia and many other countries.