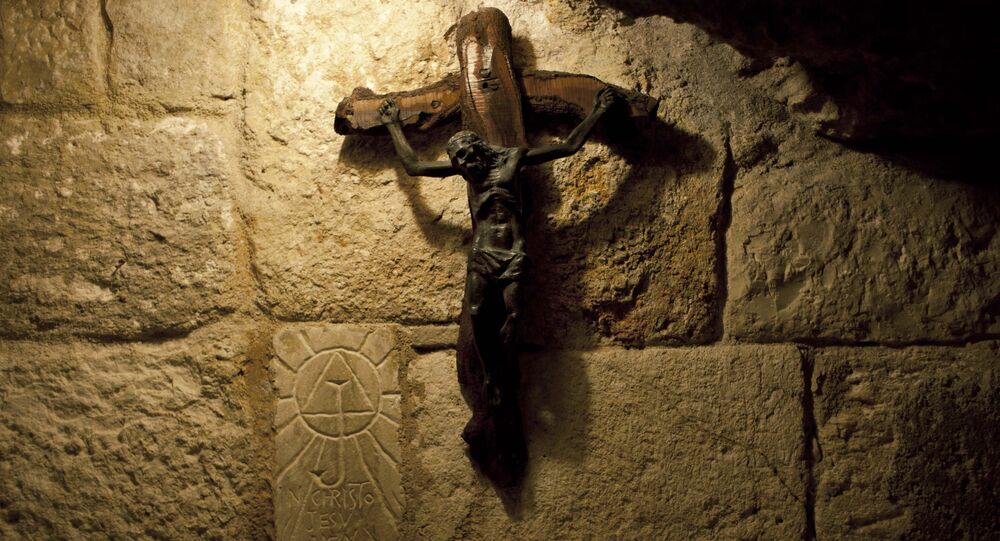 Researchers from around the globe have been trying to determine whether the Shroud of Turin is a Biblical-era relic or a medieval hoax – and now conspiracy theorists have come up with their own version of its origin.

Speaking on the TV series Ancient Aliens, author Kathleen McGowan Coppens said that the fact that many Biblical sites, such as the Church of the Nativity, the Mount of Olives and the Church of the Holy Sepulchre, were all located in caves points to their spiritual importance.

On top of that, caves played a major role in the death of Jesus Christ, who was resurrected after being placed inside a tomb.

“There does seem to be a mystical environment here, this idea of a cave being a place where someone who is of divinity comes and someone of divinity leaves, so it’s as if passages were happening in the caves”, Coppens says in the latest episode.

She further suggested that there was physical evidence of the Bethlehem cave’s spiritual nature in the Turin Shroud, a centuries old linen cloth bearing the image of what appears to be a crucified man, who is believed to be Jesus of Nazareth.

© AP Photo / Michael Probst
Researchers Aim to Prove Turin Shroud Is Genuine With Real-Life Mock Crucifixion
According to her, that image could not have been created unless “something powerful happened in that tomb”.

Michael Mott, a fellow conspiracy theory enthusiast featured in the episode, shared Kathleen’s stance, adding that the Shroud of Turin was caused by a “burst of radiation”.

But William Henry, author of The Secret of Sion: Jesus’s Stargate, the Beaming Garment and the Galactic Core in Ascension Art, made another assumption about the cave’s purpose:

“It’s possible that that cave was acting as a gateway or portal. Because in many of these stories, caves link Earth and Heaven”.

For years, researchers and scientists have been debating the veracity of the Shroud of Turin: some believe it is the burial cloth of Jesus, while others contend it’s not from the Biblical era, but a medieval forgery, referring to a 1988 radiocarbon dating of the piece of cloth.

Pope Francis has described it as an “icon of a man scourged and crucified”, but stopped short of calling it a “relic”, which would imply he believed that it really was Jesus Christ’s burial shroud.