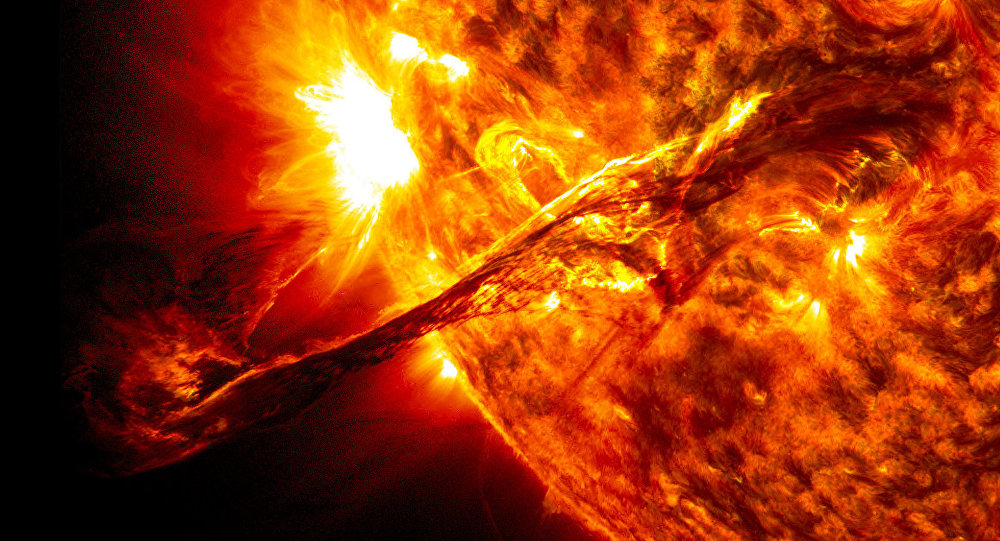 Intense flares of solar wind threaten to cause extensive damage to man-made infrastructure, from spacecraft and satellite instruments in near-Earth orbit to entire power grids on Earth itself, particularly during periods when the magnetic shield sparing Earth from deadly solar and cosmic radiation is weakened.

A stream of solar wind emanating from a canyon-shaped hole in the Sun's atmosphere is set to hit Earth's magnetic field on Thursday, Sun-Earth environment monitoring news site SpaceWeather.com has reported.

According to the monitors, the burst of solar energy, traveling at speeds of over 420 km per second, is expected to hit the planet's magnetic field today, resulting in minor geomagnetic storms and auroras mixed with unusually bright moonlight, observable by Arctic sky watchers.

The eruptions of magnetic energy from the Sun's surface, known as solar storms, occur when a disturbance on the Sun emanates outward across our solar system, spewing hot gases out into space. Such events periodically target Earth, causing small geomagnetic disturbances, and occasionally burning out electrical and communications equipment, scrambling radars, and even shutting down entire power grids. The increased amount of radiation during these has also been suspected of leading to higher incidence of cancer.

© Photo : E. Masongsong/UCLA, M. Archer/QMUL, H. Hietala/UTU
LISTEN to CREEPY Water Drum-Like Vibration of Earth's Magnetic Field
Earth is generally shielded from such space weather, particularly its weaker emanations, thanks to an invisible shield known as the magnetosphere. However, during periods when the planet's magnetosphere is weakened, such as when Earth's magnetic poles swap places, this magnetic shield is weakened, leading to potentially catastrophic consequences for life on the planet.

Earlier this month, officials from the US National Oceanic & Atmospheric Administration and the British Geological Survey revealed that the position of the magnetic north pole was moving faster than usual from the Canadian Arctic toward Russia's Siberia, prompting scientists to speculate on what would happen if a sudden pole reversal were to take place in the near future.

However, even conventional solar storms in normal conditions have the potential to be devastating when they're large enough. In 1859, a big solar storm shorted telegraph wires and sparked random fires across North America and Europe. A similar storm in 1967 caused a blackout of US military surveillance equipment in the Arctic, prompting the Pentagon to scramble for nuclear war. In 1989, a geomagnetic storm caused a nine-hour outage of Hydro-Quebec's electricity transmission system, while affecting HF radio communications worldwide.

A second storm that same year resulted in a halt in all trading on the Toronto Stock Exchange.

© CC BY 2.0 / NASA Goddard Space Flight Center / Dynamic Earth - Earth’s Magnetic Field
Science Journo Explains Why Magnetic Pole Flip Won't Kill All Life on Earth…Probably
According to a 2011 report by the US National Academy of Science, a repeat of a storm like the one in 1859 could cause up to $2 trillion in initial damage to infrastructure on Earth, and take up to ten years to fix. Last year, an Oxford University study warned that solar storms could cause roving blackouts and leave Britain alone with £16 billion ($20 billion) worth of damage.
...
Reddit
Google+
Blogger
Pinterest
StumbleUpon
Telegram
WhatsApp
313