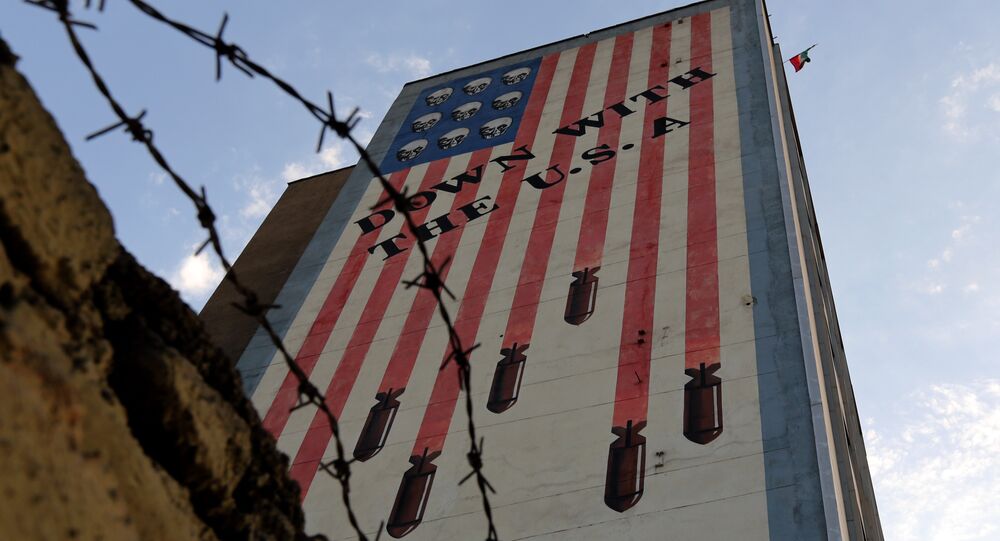 Earlier, amid an investigation by US lawmakers into alleged plans by the Trump administration to transfer sensitive nuclear technology to Saudi Arabia, Iranian Foreign Minister Javad Zarif blasted Washington over what he said was its "hypocricy" on the world stage.

Speaking at a cabinet meeting on Wednesday, Iranian President Hassan Rouhani said that Iran has been "employing its maximum determination, hope and self-confidence" in the confrontation with Washington.

"We have no doubts that the great Iranian nation's resolve will eventually win against the US," Rouhani emphasised, saying that unity between the government and the people was the key to victory in this "battle of wills."

© AFP 2021 / Mladen Antonov
Iran’s FM Zarif: Neither Human Rights Nor Nuke Programme a Concern for the US
According to Rouhani, tensions between Tehran and Washington have reached a historic maximum. "Today, the struggle between Iran and America is currently at a maximum. America has employed all its power against us," he said.

Commenting on the recently concluded US-organised Middle East conference in Warsaw, Rouhani described it as a "failure," echoing Foreign Minister Zarif's earlier description of the summit as the "Warsaw circus." He added that the Trump administration had suffered a "humiliating political defeat" after failing to achieve its goal of getting its European powers to pull out of the 2015 Iran nuclear deal.

The Warsaw conference, held on 13-14 February, was hosted Polish officials and attended by US Vice President Mike Pence, Secretary of State Mike Pompeo, and Israeli Prime Minister Benjamin Netanyahu, as well as officials from close to a dozen Middle Eastern countries. Most of the US' European allies however skipped the event, or sent low-level representatives.

Iran itself, as well as Russia, China and Turkey snubbed the meeting, characterising it as a ploy to try to build an anti-Iranian alliance and create new "dividing lines" in the Middle East.

© Sputnik / Natalia Seliverstova
Moscow: Warsaw Summit Shows US Attempt to Create Dividing Lines in Middle East
Washington pulled out of the Joint Comprehensive Plan of Action (JCPOA) nuclear deal last May, slapping Tehran with a series of sanctions. The JCPOA's other signatories, including Russia, China, France, Germany and the European Union, refused to go along with the US withdrawal, and have put in considerable effort to try to save the landmark treaty.

Last month, France, Germany and the UK created a special purpose vehicle known as INSTEX to facilitate non-dollar trade with Iran. Last week, the Russian Foreign Ministry indicated that Moscow would be interested in participating in the deal.

Iran-US relations have been poor for decades, with the two powers having no formal diplomatic relations since 1980, following the 1979 Iranian revolution which toppled the pro-US Shah regime, which was installed with CIA help in 1953.

Washington has accused Iran of being a major state sponsor of terrorism, and alleged that the country poses a threat to US allies in the region, including Israel and Saudi Arabia. Tehran has countered, alleging that the US was planning to attack Iran or meddle in its internal affairs, and blasting Washington for maintaining a ring of military bases along the Middle Eastern country's borders.

'Like a Family': US Reaffirm Commitment to Europe, NATO Amid Dispute Over Iran