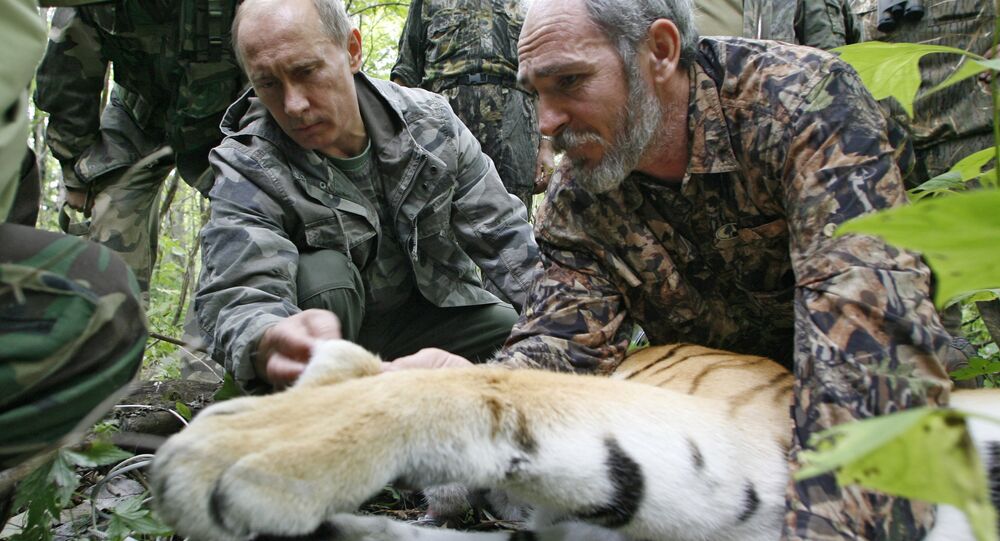 Earlier, national public broadcaster France 2, the second-most watched television channel in the country, was forced to delete a story about the vacation activities of world leaders, which featured a bit about Vladimir Putin "hunting a tiger in Siberia."

The television channel got in trouble last August after creating a dubious description of the Russian president's vacation activities, posting a photo of Putin with a tranquilised tiger in Siberia and implying that he had hunted it down and killed it. In fact, the photo was taken in August 2008, while Putin was Russia's prime minister, during his visit to the Ussurisky nature reserve in the Russian Far East. Putin was in the region to raise public awareness about the need to protect endangered species, and helped fit the tiger in the photo with a GPS tracker.

The lavish Bobards d'Or ceremony, held on Monday at Paris's Theatre du Gymnase Marie Bell, featured all the trimmings of a real awards show, including little golden statuettes of Pinocchio modelled after the Oscars.

Tweet reads: "Voting on the Bobards d'Or. A great atmosphere! The International Bobard d'Or was won by France 2 for its phony report on 'Putin the Tiger Hunter'…while the images were really from a campaign to protect tigers."

© Sputnik / Alexei Druzhinin
French TV Admits Mistake in Story About Putin 'Hunting Tiger'
The TV channel's spoof triggered an intense debate on French social media, and even prompted France's Liberation newspaper to post a cheeky article titled "No, Putin does not hunt a tiger during his holidays." France 2 insisted that the flub was not intentional fake news, but an "inadvertent mistake."

In addition to France 2, Bobards d'Or were handed out to political commentator Clement Viktorovitch for alleged attempts to fiddle with the figures about how many migrants were coming to France each year, and a 'Yellow Vest hoax' award to journalist Thomas Boulouque, who sparked controversy after misidentifying the flag of Picardy for a French royalist flag, which he implied was a sign that the Yellow Vest protests had been 'infiltrated' by right-wing groups.

The Bobards d'Or ceremony was launched in 2010 at the initiative of the Polemia Foundation. Since then, French media have accumulated a host of the parody awards for erroneous reporting.