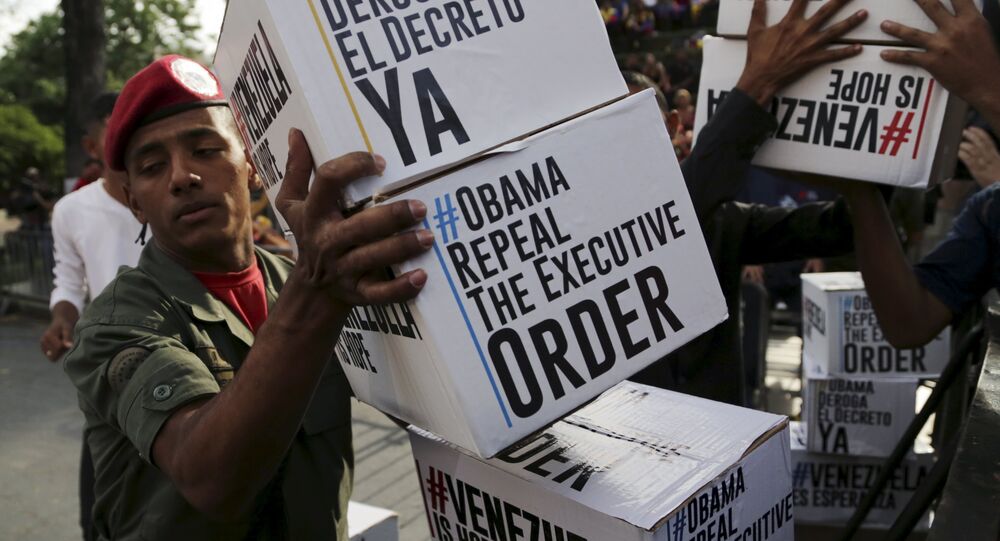 MOSCOW (Sputnik) - GPS-Air, a US-based air cargo company, denied allegations that it illegally shipped weapons to Venezuela and the company continues to offer freight forwarding services to the South American country without disruption, a source in the company told Sputnik on Thursday.

"We’re still doing it. There’s nothing going on. There’s no investigation against us in Venezuela. Not at all", a representative of the Miami-based company, who declined to be named due to the sensitivity of the issue, told Sputnik.

A senior Venezuelan security official, General Endes Palencia Ortiz of the Bolivarian National Guard of Venezuela, who is the nation’s vice minister of citizen security, said authorities confiscated a large cache of military grade weapons, including 19 assault weapons, 118 ammunition cartridges, and 90 military-grade radio antennas, that have been transported into the country on a cargo plane originated from Miami, Florida in early February.

The cargo plane in question is a Boeing 767 aircraft owned by an air freight company called 21 Air LLC, based in Greensboro, North Carolina. Flight tracking records indicated that the aircraft started to make frequent flights to Colombia and Venezuela after January 11, the same day when opposition leader Juan Guaido declared himself ready to assume the presidency of Venezuela and triggered the ongoing political crisis in the country.

© REUTERS / Isaac Urrutia
Venezuelan Opposition, Its US Backers Hoped to Unseat Maduro in 24 Hours - Reports
According to a statement from the Carabobo state governor’s office, authorities discovered the weapons during a routine inspection of cargo unloaded off the US plane, which landed in Valencia, the third largest city in Venezuela, two days before.

The alleged shipment of weapons into Venezuela raised questions on whether the US government was preparing to provide military support for the opposition’s efforts in challenging legitimate President Nicolas Maduro’s grip on power.

In response, Alberto N. Moris, a lawyer for 21 Air, told the Miami Herald that the air freight company has no knowledge of the content of the cargo aboard its plane because it was chartered by a second company named GPS-Air.

"All of the cargo on board our aircraft was from the GPS-Air, who chartered the aircraft. GPS-Air has been the only company that has chartered it for the last few weeks to Valencia, Venezuela", Moris was quoted as saying.

The GPS-Air representative explained that the company has to go through all regular inspection through US Customs before the cargo can be shipped to Venezuela.

"We’re a freight forwarding service. What people do is that they prepare everything and they send it to us. And we ship it over there [to Venezuela]. We’re like UPS or FedEx. We check everything here and then everything has to go through the customs. Just like how it should be. So I don’t know where that [the allegation] came from", she said.

According to public corporate records, GPS-Air was registered by Cesar Meneses with Jose Manuel Calvo serving as the company’s president. Calvo owned several other air cargo related businesses registered in the same address in Miami, the records showed.

In 2013, Venezuelan customs and tax authorities seized merchandises valued at about $1 million belonging to Logis Cargo Express and GPS-Air, both are companies owned by Calvo, according to local news reports at the time.

© REUTERS / Andres Martinez Casares
'Legally Belongs to Us': Maduro Warns Against 'Robbing Venezuela of Gold' Amid Bank of England Dispute
Jose David Cabello, Venezuela’s National Superintendent of Customs and Tax, told reporters that the confiscated products weighed over 10,000 kilograms (about 22,000 pounds), which was much more than the 5,000 kilograms weight declared by the companies. Cabello named GPS-Air as the company responsible for importing the merchandises and identified Jose Manuel Calvo as the legal representative of the company. Calvo and his companies were expected to face tax fraud charges.

Nevertheless, public corporate records showed that Calvo started another logistics company named Lear Express in May 2014 and continued to offer cargo and package delivery services from the United States to Venezuela until today.

The official website of Lear Express described it as a courier service that can help Venezuelan customers make orders on popular US online retailers such as Amazon and eBay.

The Venezuelan customers simply need to ask the US-based sellers to send the products they bought to Lear Express’ address in Miami. Lear Express will charge a service fee to deliver the purchases goods from Miami to their various pickup points in Venezuela, including the capital city Caracas and Valencia. The listed address to receive the shipment at Lear Express in Miami matches the registered office address of GPS-Air.