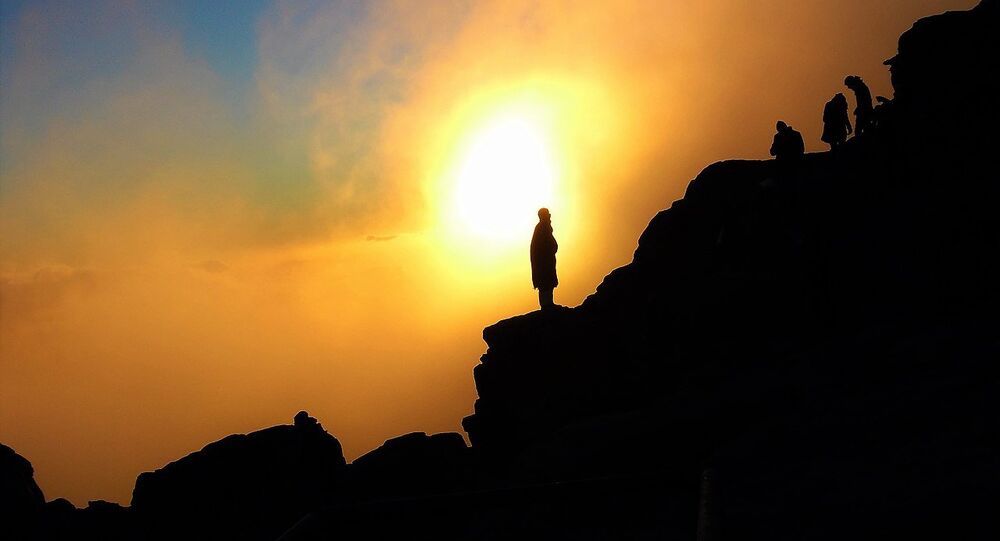 The biblical Mount Sinai is traditionally placed in Egypt's Sinai Peninsula, but some researchers say it could be located over a hundred miles eastwards on the Arabian Peninsula across the Gulf of Aqaba.

Ryan Mauro, the national security analyst at the non-profit anti-extremist Clarion Project, and the Doubting Thomas Research Foundation have released the results of a two-year joint search for the holy site in a documentary titled "Finding the Mountain of Moses: The Real Mount Sinai in Saudi Arabia".

According to the new investigation, the actual place where Moses received the Ten Commandments is in Saudi Arabia, and the Kingdom is well aware of this fact.

The documentary claims, based on several Christian, Jewish, and Islamic sources, that the biblical Mount Sinai is actually located in northwest Saudi Arabia. Ryan Mauro alleges that the Saudi government has been trying to conceal its location from the rest of the world using "fences, police, and a threat of force".

He has interviewed locals and reached out to a person connected with jihadists to back up his claims.

"When I was in the jihad world, we all knew the Mount Sinai was in Saudi Arabia," said an unidentified man, who hid his face and used a voice-changing filter. "The people on the outside, even most Muslims, had no idea that it was there. Because we, fighters, didn't want anyone to know about it."

"We all knew that the Saudi government hid it and protected it with security, and we all agreed with it. We believe that if a site — even a holy site — is visited by people and used for idolatry, it should be destroyed. But our hiding it, according to the Islamic law, is what saved it so you can see it today and appreciate it."

Mauro claims key evidence is in jeopardy due to a $500 billion futuristic mega-city project, which is to be built in the coming years. "The Saudis are construction a super city that is planned to be 33 times the size of New York. If all of us don't take action, Saudi construction in the area may destroy key evidence and prevent excavation for the foreseeable future."

He has launched a website to try and convince Saudi Arabia to preserve the site.

The analyst believes that Jabal Maqla, one of the tallest mountains in the Arabian Peninsula and a peak on the mountain range of Jabal al-Lawz, is the actual place where Moses received the Ten Commandments.

He invokes Moses' account from the book of Exodus and cites the blackened top of the mountain, which could have been burnt by the Lord descended on Mount Sinai in fire, as per the Book of Exodus. However, he admits, these could simply be natural volcanic rocks.

He also alleges to have found Elam, the oasis where Moses and the Israelites found water after crossing the Red Sea en route to Mount Sinai, and what could have been several other pieces of evidence, like a rock split by Moses or the remains of an ancient altar where the Israelites worshipped a golden calf while Moses was on top of the mountain.

"Think of how many things line up with the biblical story right here at this mountain," Mauro concludes, defying a popular theory that the biblical Mount Sinai is located in the Sinai Peninsula.

The Saudi Arabian authorities so far have not commented on the documentary.

Apocalypse How: Events Resembling 'Biblical Plagues' Sighted Around the Globe