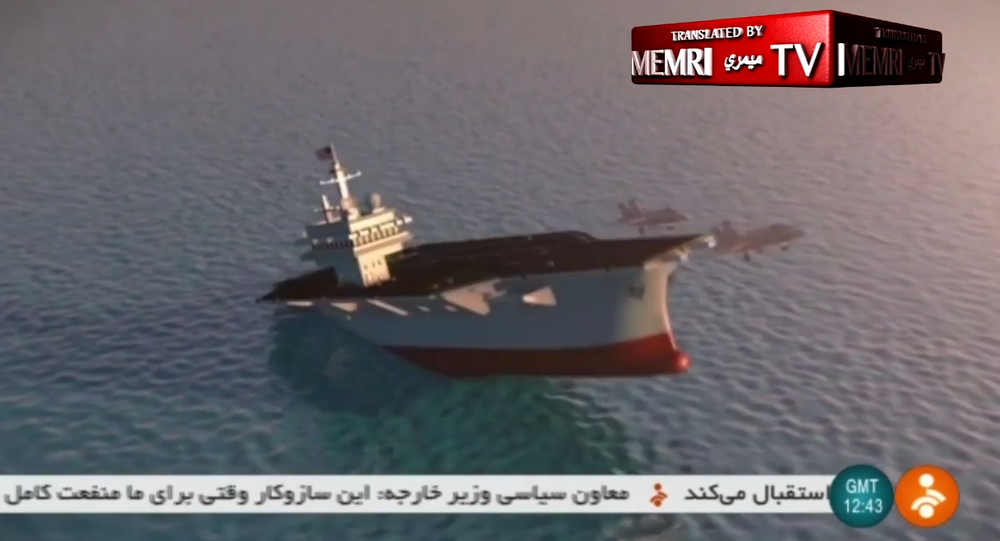 Iran aired the computer-generated clip on 1 February – just two months after the US deployed a carrier strike group in the Persian Gulf amid Iranian threats to close the Strait of Hormuz in retaliation for sanctions.

The video begins with the US aircraft carrier strike group accompanied by four destroyers cruising on the sea to the tune of Queen’s “We Will Rock You”.

Suddenly, the camera cuts to a green periscope of an Iranian sub surfacing as the rock band’s evergreen hit abruptly switches to sinister music. The destroyers start going down one by one with an obtuse boom, and as the music gets even more ominous, the carrier itself disappears beneath the surface.

The animated clip ends with an underwater shot of the wreckage and the sunken ships, and the words reading “40 years”, in an apparent reference to the 40th anniversary of 1979 Islamic Revolution in Iran.

“Our Iran has the technology to manufacture very advanced Ghadir-class submarines”, a voiceover is heard saying.

The US deployed an aircraft carrier strike group led by the USS John C. Stennis in the Middle East in December 2018. The vessels took part in a joint naval exercise with the Essex Amphibious Ready Group (ARG) on 12 December in the Arabian Sea.

© AP Photo / Iranian Army
Iranian Ships Reportedly Fire Rockets Near US Aircraft Carrier in Persian Gulf
The dispatch came shortly after Iran threatened to block the Strait of Hormuz, the only sea passage from the Gulf to the open ocean and a strategic waterway linking Middle East crude producers to key world markets, in response to US sanctions on its oil industry.

Iran began manufacturing Ghadir-class submarines for operations in shallow waters, such as the Persian Gulf, in 2005. They are mini, or midget, subs that are equipped with sonar-evading technology and are able to launch torpedoes underwater, according to an Iranian state TV report. The submarines also have the ability to drop marine mines.