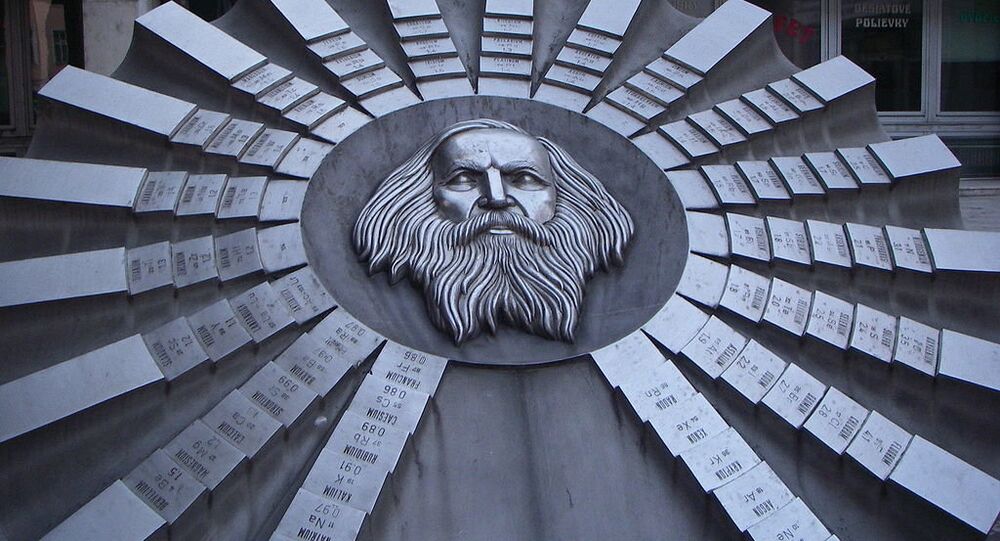 February 8 marks the 185th birthday of outstanding Russian chemist Dmitry Mendeleev, who revolutionised chemistry 150 years ago, having devised the periodic table of elements.

Three years ago, the Google search engine dedicated one of its signature doodles to the 182nd birthday of the "father" of the periodic system Dmitry Mendeleev. In 1869, Mendeleev published the first recognisable periodic table, created to illustrate periodic trends of dozens of elements known at the time and demonstrated how they related to each other in a certain pattern.

Here are some lesser-known fun facts about his groundbreaking invention:

As surreal as it might seem, Mendeleev's "eureka moment" might have come when he was playing his favourite card game Solitaire. The chemist decided to use the format of the game to help bring order to his periodic table: in the game, cards are arranged both by suit, horizontally, and by number, vertically.

© AFP 2020 / Jonathan NACKSTRAND
What We Shoud Know About 2017 Nobel Prize Laureates in Chemistry
So, what he did was he made up a set of cards, one for each of then-known elements, and wrote the atomic weight and the properties of each element on a card.

In February 1869, Mendeleev was working on organising the elements with his cards, arranging and rearranging them in various sequences until he eventually noticed some gaps in the order of atomic mass. Exhausted from his relentless efforts, the chemist fell asleep and saw his future invention in a dream.

Element 115 Exists Less Than a Second

Mendeleev's mission lives on after all these years as scientists continue to adjust the periodic table, discovering new elements. Currently, the table consists of 118 elements, which are organised by their atomic numbers, and it was only in January 2016 that elements 113, 115, 117 and 118, Nihonium, Moscovium, Tennessine and Oganesson, respectively, were added to the table’s seventh row to make it complete.

Most of the isotopes of superheavy elements are unstable and undergo decays within a very short period of time, thus, for instance, Moscovium, which goes by atomic number 115, is highly radioactive and its most stable known isotope, moscovium-290, has a half-life of merely 0.8 seconds.

While there are 118 confirmed elements in the periodic table, out of which 90 can be found in nature, others are strictly man-made. Technetium was the first man-made element in the table, discovered by Carlo Perrier and Emilio Segre in 1937 and named after the Greek for artificial — "technetos".

Rumour has it Argentina was named after silver, known as argentum in Latin, becoming the only country to be named after a chemical element. The first use of the name "Argentina" can be traced back to expeditions by the Spanish and Portuguese conquistadors to the Río de la Plata, or "River of Silver", in the early 16th century.

Back in 1871, such elements as gallium, germanium, and scandium were all unknown, but Mendeleev left spaces for each and predicted their atomic masses and other chemical properties. They were discovered within 15 years, fully complying with basic characteristics the chemist had thought of. Such accuracy in predictions significantly contributed to the table's acceptance.