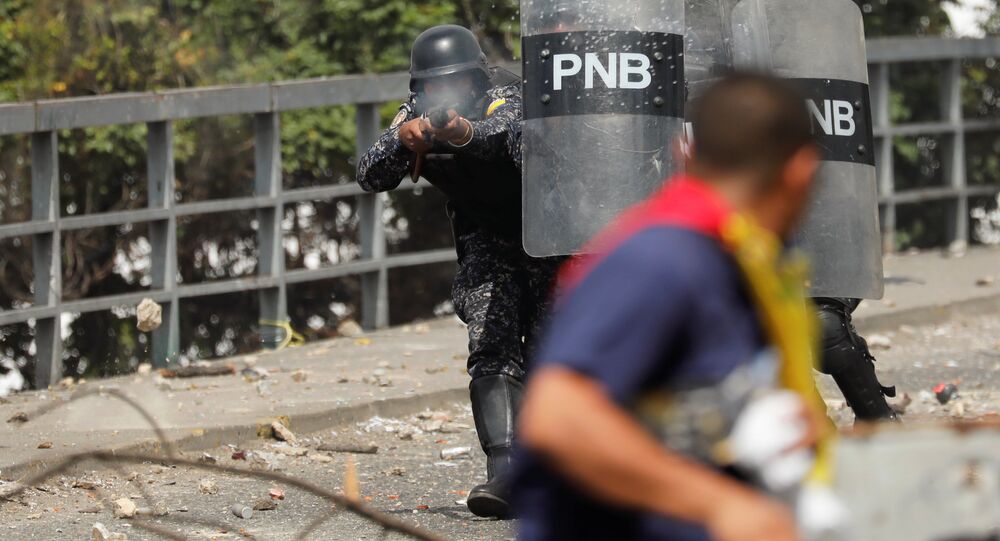 The United States is working on scenarios for regime change in Venezuela, Russian Foreign Ministry spokeswoman Maria Zakharova has stated at a weekly briefing in Moscow.

"There are still signs coming from Washington about the possibility of using force in order to overthrow the legal authorities, including through direct military invasion. This is actually being spoken about openly in the White House. I would like to recall that this kind of statement from the mouth of American officials is a direct violation of Article 2 Par. 4 of the UN Charter, ordering all UN members to refrain from the threat or use of force in international relations", Zakharova said at a briefing.

According to Zakharova, the decision on the use of force has already been made by Washington, "everything else is nothing more than a covering operation".

READ MORE: What's at Stake in Venezuela is the 'Concept and Essence of Democracy' — Scholar

"Washington has turned to direct threats of sanctions to the Venezuelan military, who remain loyal to the legitimate government. That is just a different, new reading of the 'carrot and stick' approach. On the one hand, they threaten a potential punishment. On the other hand, they promise a potential reward", Zakharova noted.

The official noted that imposing sanctions against Venezuela while at the same time delivering international humanitarian aid to the country is a vivid example of cynicism.

"They say that Venezuelans live poorly under the incumbent authorities, so do not impose sanctions! Let the state live and develop and solve its problems independently, and do not aggravate them," Zakharova added.

A day earlier, US National Security Advisor John Bolton said that Washington was prepared to waive punitive sanctions on senior Venezuelan military officers if they pledge allegiance to opposition leader Juan Guaido who has proclaimed himself the Latin American country's interim president.

The statements come after US President Donald Trump confirmed in an interview with CBS that he is considering sending the American military to Venezuela as an "option".

© AP Photo / Ariana Cubillos
If Montevideo Summit Fails, Military Clash in Venezuela Possible - Uruguayan MP
The crisis in Venezuela intensified when opposition leader Guaido proclaimed himself interim president of Venezuela on the 23rd of January after the opposition-controlled National Assembly declared that Maduro had usurped power.

Maduro has called Guaido a puppet of the United States and accused Washington of attempting to conduct a coup d’etat in Venezuela.

Russia, Mexico, and Uruguay were among those that voiced their support for Maduro as the country's only legitimate president and expressed readiness to act as mediators in the conflict between the government and the opposition.