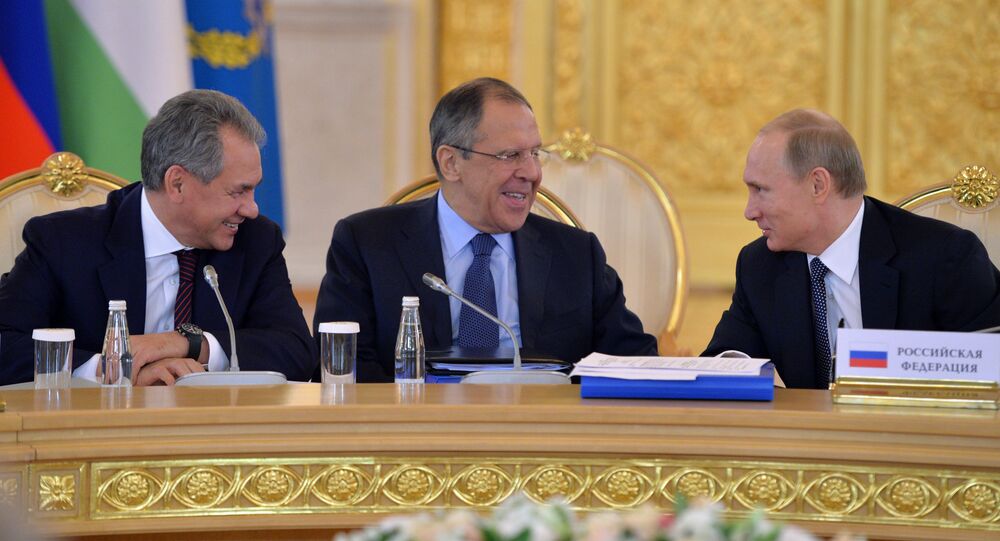 On Friday, the US announced the suspension of its participation in the INF Treaty and began the process of fully withdrawing, which will be completed in six months.

Russian Foreign Minister Sergei Lavrov has stated that Moscow would give a "mirror response" to all US moves related to the Intermediate-Range Nuclear Forces (INF) Treaty.

"As for the INF Treaty, we have already said everything in response to the unfounded accusations by the United States. President Putin has determined our position — we will act in a mirror-like manner. The Americans have suspended their participation in the agreement. We did the same. Accordingly, upon the expiration of the six-month period, according to the results of the official note from the United States on withdrawal from this agreement, the deal will cease to operate", Lavrov stated on Wednesday at a briefing in Turkmenistan.

As for the possibility of talks with the US on the INF Treaty, as well as the issue of strategic stability, Lavrov stated that "there is no lack of initiatives that we have provided to our American, Western and NATO colleagues".

Earlier this week, Lavrov said that Moscow possesses all military-technical means in order to react to the threat posed by the US withdrawal from the historic Cold War-era treaty.

Commenting on the issue, Kremlin Spokesman Dmitry Peskov said that Kremlin was unsure about the feasibility of US President Donald Trump's idea to renegotiate the Intermediate-Range Nuclear Forces (INF) Treaty, because has received no specific offers from the US side on the issue.

"We have heard earlier statements by the US administration about the need to bring other countries to this treaty. We don’t know how realistic it is, we didn’t receive any concrete initiatives from our US partners. According to the president's stand, we will not offer any more initiatives in this area, because we have done it repeatedly," Peskov said.

© REUTERS / Jean-Paul Pelissier
France Simulates Nuclear Strike Amid Russian-US INF Tensions - Report
Just a day after the US announced the suspension of its participation in the INF Treaty and began the process of full withdrawal from the accord, which is due to be completed in six months, Vladimir Putin held a meeting with Foreign Minister Sergei Lavrov and Defence Minister Sergei Shoigu, during which the Russian president said that Moscow was suspending its obligations under the INF Treaty in response to Washington's move.

Putin, in addition, stated that the use of target rockets and the deployment of Mk 41 launchers in Europe since 2014 by the United States is a direct violation of the Intermediate-Range Nuclear Forces Treaty and reaffirmed that Moscow had been in strict compliance with the terms of the document.

On 1 February, US Secretary of State Pompeo justified Washington's decision to suspend its obligations under the historic INF Treaty, triggering the six-month withdrawal process, by yet again accusing Russia of violating the treaty. Earlier, the US issued an ultimatum to Russia, saying that it had 60 days to start to comply with the agreement, or, otherwise, the United States could leave the treaty on 2 February.

© Photo : Russian Defence Ministry
Russia to Develop Ground-Based Kalibr Missiles by 2021 in Light of INF Treaty Row - Defence Minister
Washington has been claiming that Russia's 9M729 missile violates the INF Treaty, which bans missiles with ranges between 500 and 5,500 kilometres (310 and 3,400 miles).

After being accused by NATO of a "lack of transparency" over the 9M729 missile (NATO: SS-08), the Russian foreign and defence ministries held a briefing, showing the missile, which is used in Iskander-M systems, and revealing its characteristics. Despite being invited to the briefing, NATO representatives, including US and EU envoys, refused to take part in the meeting.