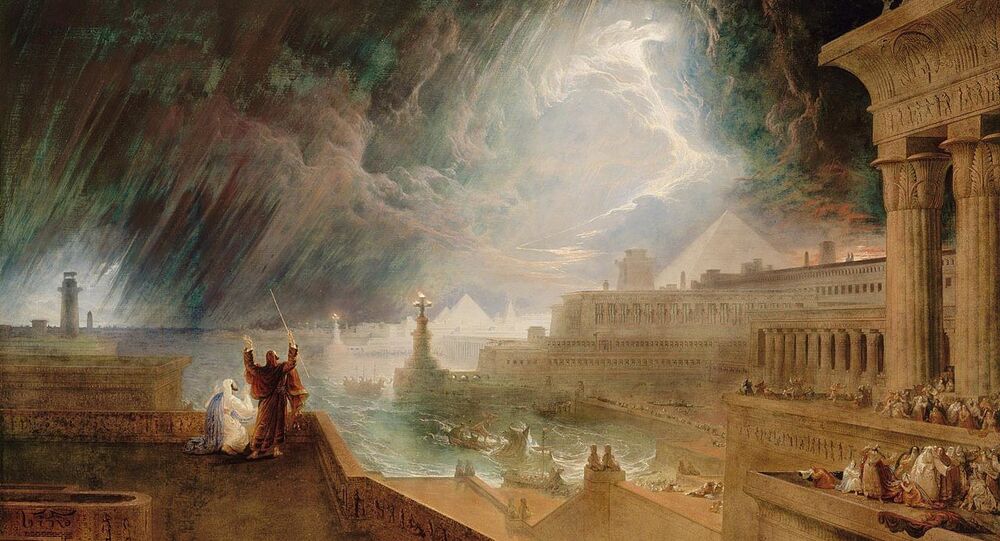 Apocalypse How: Events Resembling 'Biblical Plagues' Sighted Around the Globe

Volcanic eruptions, floods, disease outbreaks and insect migrations that were witnessed across the Earth recently all have perfectly logical scientific explanations, but at the same time could possibly be interpreted as dire portents for things to come.

Severe natural disasters and peculiar phenomena that often get interpreted as some kind of divine punishment are hardly anything new in human history.
And it appears that this year is not going to be any different, as reports of unsettling events trickle in from various corners of the planet.

When the Oceans Will Run Blue

The phenomenon of rivers and lakes suddenly turning red was observed numerous times in human history, often serving as a cause for speculation about supernatural forces being at work.

© CC0
NASA Scientist REVEALS Secret Sign That Would Indicate Impending Apocalypse
This time, however, nature is about to take things up a notch, as it is the oceans that are going to shift colour by the end of this century due to climate change, according to a new study published in Nature Communications.

"There will be a noticeable difference in the colour of 50% of the ocean by the end of the 21st century," study lead Stephanie Dutkiewicz said as quoted by MIT News, noting that the impending change “could be potentially quite serious”.

Crocs and Snakes Roam the Streets

Residents of Townsville, Australia have been warned about snakes and crocodiles that were spotted in the city’s flooded residential areas as Queensland endures what has been described by the media as a “once in a century” flood.

This is #Townsville BEFORE the flood peaks this afternoon #BigWet 🙏 pic.twitter.com/xOjTaoqRqK

​According to ABC News, over 1,100 people have been evacuated from the area, while authorities warn that more heavy rain is expected in the coming days.

At least 10 US states reported outbreaks of measles in 2019, according to CNN, while in December, The Guardian warned that measles outbreaks in Europe reached a 20-year high.

Experts interviewed by the newspaper attributed this trend to the actions of vaccine sceptics who allegedly help drive down “immunisation rates for measles, HPV against cervical cancer, flu and other diseases”.

A spate of volcanic eruptions and earthquakes in the so called Ring of Fire zone, an area of high seismic activity that covers large swathes of land from New Zealand all the way to northern Russia, as well as from the US down to Chile, led a number of rabbis to warn in December that this phenomenon may well be a sign of an Apocalypse as it is foreseen in Hebrew texts.

The Plague of Insects in Mecca

Local municipal authorities had to mobilise clean-up teams after massive swarms of locust descended upon the Grand Mosque of Mecca, the most sacred site in Islam, early in January.

Videos recorded by worshippers showed insects swarming all over in the focal point of the annual Muslim pilgrimage, though whether it was some kind of insect migration or dire portent remains unclear.

​All of the aforementioned phenomena appear to bear some resemblance to the biblical Plagues of Egypt – namely, the “Water Into Blood” (oceans changing hue), “Frogs” (snakes and crocs in Townsville), “Boils” (measles outbreaks), “Thunderstorm of Hail and Fire” (increase in seismic activity) and “Locusts” (locusts in Mecca).

However, some observers may also point out that these parallels could be considered far-fetched, and that all of these events have a more rational explanation.