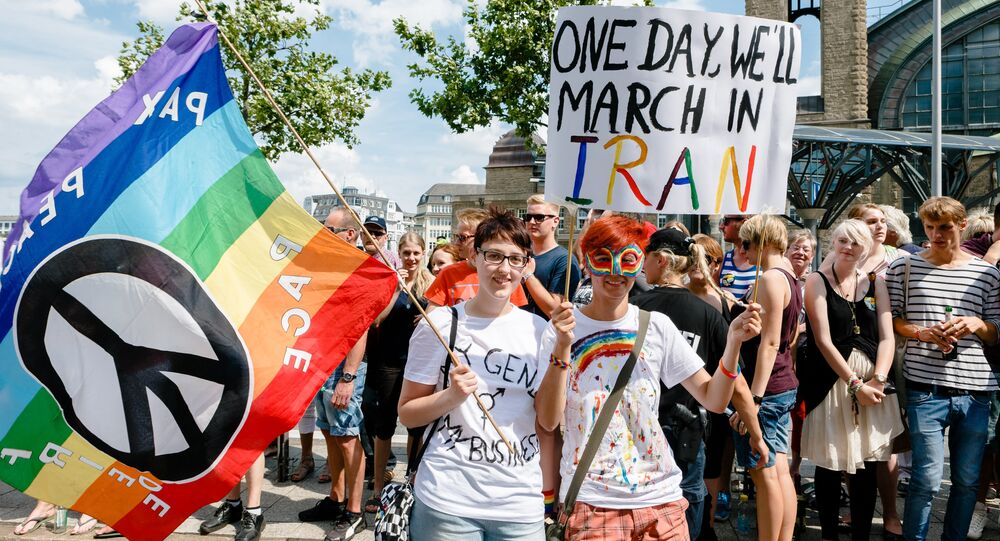 Iran's stringent anti-homosexuality laws have led to well-deserved criticism from human rights groups, but the US ambassador's decision to focus on the case of the hanging of a kidnapper and rapist of minors who also happened to be gay has raised eyebrows.

US Ambassador to Germany Richard Grenell has issued a sweeping condemnation of Iran, penning an op-ed for Germany's Bild newspaper in which he argued that Iran's recent public execution of a 31-year-old gay man should be condemned by "good people everywhere."

"The recent press reports…that the Iranian regime publicly hanged a 31-year-old man for being gay should be a wake-up call for anyone who supports basic human rights," Grenell wrote. "Politicians, the UN, democratic governments, diplomats, and good people everywhere should speak up – and loudly," he stressed.

According to the envoy, "Iran's horrific actions" were "on par with the brutality and savagery regularly demonstrated by ISIS.*"

The op-ed was an extension on a series of tweets Grenell posted over the past week about the story, in which he urged the US' European allies not to allow "this barbaric act" to "go unanswered," and stressed that Iran's values were "NOT European values."

many of our European allies have Embassies in Tehran. This barbaric act must not go unanswered. Speak up. https://t.co/MlOJPizEZq

Iran is a gathering storm of chaos over Europe. Terrorism, threats of death, ballistic missile programs, the hanging of gays. These are NOT European values. https://t.co/hpklA4wAmF

Oddly, Grenell decided to play down an important fact about the executed man, who was reportedly hanged in the southwestern Iranian city of Kazeroon on 10 January. According to the Iranian Students' News Agency, the man was charged not only with having intercourse with another man, which is illegal under the Iranian penal code, but also with the kidnapping and rape of two 15-year-old boys.

In his op-ed, Grenell implied that the other charges amounted to "outrageous claims" tacked on to the man's case to justify the hanging.

Many twitter users had other ideas, however, accusing the ambassador of posting "fake news" and accusing the US of "hypocrisy," given its alliance with other Middle Eastern countries with similar anti-gay laws.

Richard Grenell doubling down on his fake news.
The man was charged with kidnapping and raping two 15 year old boys, not homosexuality.
It is true that the situation of LGBT people in Iran is far from acceptable, but this kind of propaganda can only hurt them.

They hang men in Saudi Arabia for being gay also — how come you NEVER criticize Saudi Arabia? Is it because they are an ally of Israel?

And total silence about your #Saudi buddies 🤣😂😂

Other readers, voicing their support for Grenell, turned his attack on Iran into an attack on Islam, with one user posting an inflammatory picture of a jet flying into the World Trade Center on 9/11 captioned "ISLAM." For the record, the 9/11 attacks were carried out by jihadist radicals led by Osama bin Laden, and had nothing to do with Iran.

This happens in other Muslim countries to. Why does the world ignore these atrocities?

Others still suggested that the ambassador stick to problems in the US' own backyard before looking for problems in other countries.

Ambassador Grenell is well-known for his diplomatic efforts to interfere in the affairs of other countries. Last month, the envoy sent German energy companies letters warning that they would face US sanctions if they continued cooperating with Russia's Gazprom on the construction of the Nord Stream 2 gas pipeline. The letters led to a sharp rebuke from German businessmen and officials.

*Also known as Daesh, a terrorist group outlawed in Russia and many other countries. Iran has provided significant assistance to Syrian and Iraqi forces looking to destroy Daesh after it declared a caliphate in western Iraq and eastern Syria in 2014.