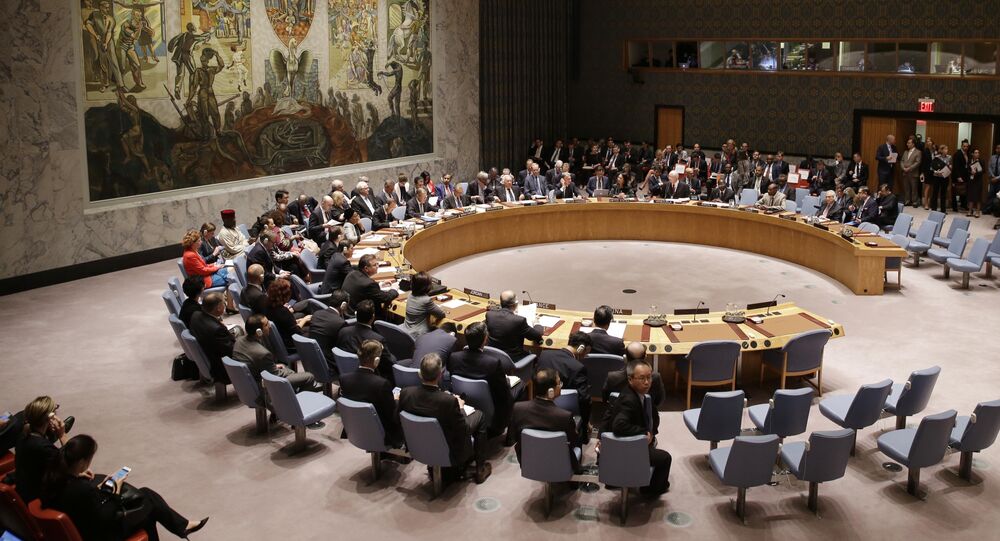 The United Nations Security Council (UNSC) is holding an emergency meeting to discuss the situation in Venezuela. The political crisis in the country flared up as Venezuelan opposition leader Juan Guaido declared himself the interim president.

Addressing the UN Security Council, the Venezuelan Foreign Minister Jorge Arreaza demanded the proof of the election fraud, the United States and its allies claimed. He repeatedly recalled that Venezuelan President Nicolas Maduro is a legitimate head of state.

He continued questioning the logic behind the European states ultimatums put forward by Germany, UK, France and Spain earlier in the day. As he noted, Venezuela simply asks for respect of international laws, including the UN charter in the issue.

"Nobody is going to give us deadlines or tell us if there are elections or not," Foreign Minister Jorge Arreaza stated. "How is it that you can issue an ultimatum to a sovereign government?" he asked.

Speaking further, the minister stressed that Caracas hoped that the international body would convene on more meeting, aimed to find out who had been the initiator of a coup attempt in Venezuela.

"I hope that the Security Council will convene a meeting to evaluate who was behind this coup d’etat and to punish those who were behind it… And they would not need a lot of intelligence because of the evidence is abundant," Arreaza said.

"It was Donald Trump who threatened the use of military force directly against the Bolivarian Republic of Venezuela. How is that he was not even challenged or questioned by the entities of multilateralism?" Arreaza said.

In conclusion, Arreaza underlined that peace and stability would prevail in Venezuela despite foreign efforts to initiate a war there. At the end of his speech, he read a part of the Venezuelan constitution, noting that self-declaration as a president is not mentioned there.

Later on, commenting on the US statements during the meeting, the representative of Venezuela noted that dialogue with Washington and Donald Trump "stands and still on the table".

"We make it abundantly clear here, I quote a point that President [Nicolas] Maduro has made, it is our intention to establish communication and dialogue with the government of President Trump. That offer stands and is still on the table," Arreaza said at an emergency UN Security Council meeting.

"We must support the Venezuelan people for the sake of peace in the region," Pompeo added.

"Cuba has directly made matters worse. And the United States and our partners are the true friends of the Venezuelan people," Pompeo said.

Also, he called on the international community to recognise Guaido as the interim president of Venezuela.

"Now we have a new leader, [Juan] Guaido, in Venezuela, who promised to bring elections and constitutional order back to Venezuela and security back to the region. We cannot delay this critical conversation, which has the world's attention. For the sake of Venezuela and the region, we must support the Venezuelan people and do so right now," Pompeo stressed.

The UN human rights office said that at least 20 people have died in the unrest in Venezuela, adding that the deaths should be subject to an impartial investigation.

Addressing the UN Security Council, Anne Gueguen, the French deputy permanent representative to the UN stated that France calls on Venezuela authorities to respect the rights of the National Assembly.

"France calls on the Venezuelan authorities to respect the rights of the National Assembly… Given the fact that the National Assembly is the only… democratically elected body in Venezuela. Given that the situation continues to deteriorate France urges the Venezuelan authorities to authorize and facilitate the work international humanitarian actors and NGOs that are seeking to provide humanitarian assistance to the most vulnerable men and women of the society, in particular, children, persons with disabilities and the elderly," Gueguen said.

Venezuela's political crisis escalated after mass protests began against President Nicolas Maduro. Amid the rallies, the speaker of the country's parliament, Juan Guaido, declared himself the interim head of state. Guaido's interim presidency has been supported by around a dozen countries, including the US.

About 500 People Arrested During Mass Rallies in Venezuela - Rights Group