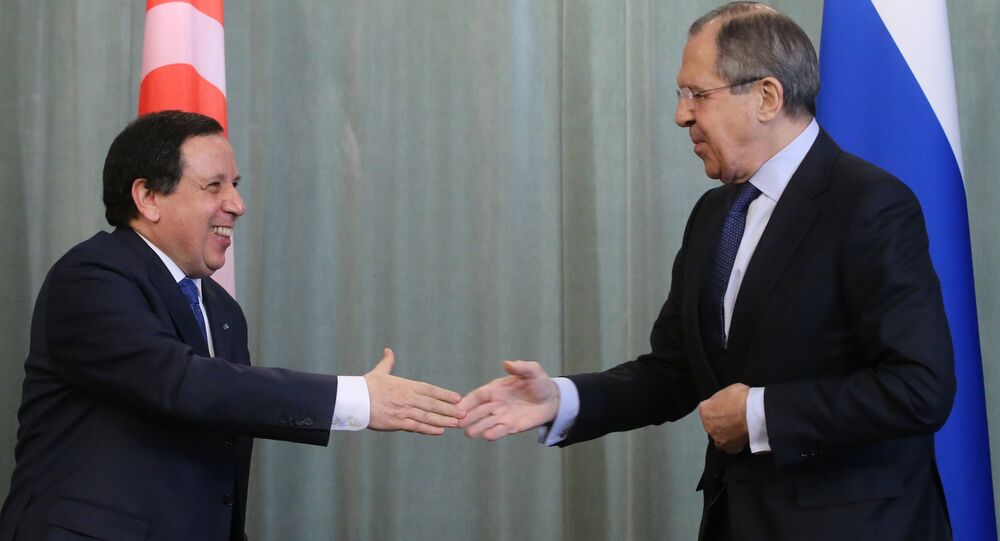 Russian Foreign Minister Sergei Lavrov discussed with his Tunisian counterpart, Foreign Minister Khemaies Jhinaoui, the situation in the Middle East and North Africa, in addition to other pressing issues.

Russian Foreign Minister Sergei Lavrov on Saturday lauded Tunis for being a reliable partner and commended the Tunisian government for securing stability in the country that has suffered a revolution almost a decade ago.

"Tunisia is our reliable partner. We are following with sympathy the efforts of your government in maintaining stability in the country. And we see that this line is paying off," Lavrov said at the meeting with Tunisian Foreign Minister Khemaies Jhinaoui.

Russia is interested in the region of North Africa becoming more stable, the minister noted.

"Today we agreed to intensify our anti-terrorist cooperation both within the framework of the United Nations and bilateral contacts," Lavrov said during a press conference after the talks with his Tunisian counterpart, Khemaies Jhinaoui.

Sergey #Lavrov met with @Jhinaoui_MAE during his working visit to Tunisia:

Commenting on the Syrian issue, Lavrov said that Russia would like Tunisia to support the reinstatement of Syria in the Arab League.

"This topic has been discussed in both Algeria and Morocco. We would like Tunisia to support the process of reinstatement of Syria in the Arab family, in the Arab League, especially since the next meeting of the League of Arab States will be held here in March," Lavrov said at a press conference.

In turn, Tunisian Foreign Minister Khemaies Jhinaoui said that Tunisia thinks it's important for Syria to be involved in discussions at the Arab League and the organisation could take a decision on Damascus' reinstatement in the league's General Assembly on 31 March.

"The General Assembly of the Arab League will be held on March 31. Perhaps a decision will be made there, so Syria might return to the Arab League. The leaders of this organization suspended the membership of Syria by their own decision," Jhinaoui said at a press conference.

"But, of course, Syria is an Arab country, and definitely its presence in the Arab League and participation in all discussions is very important," Jhinaoui added.

Earlier, Arab League Secretary General Ahmed Aboul Gheit said that Syria could return to the Arab League if all other Arab states give their consent to that.

Commenting on the repatriation of Syrians, Sergei Lavrov said that Moscow hopes Tunis will promote the return of Syrian refugees, currently residing in Tunisia, to their homeland.

"We appreciate the support that we feel from our Tunisian friends in regards to the efforts of Russia within the framework of the Astana format to promote the settlement in Syria… I am sure that Tunisia is interested in the return of the Syrian refugees, who have found shelter in Tunisia, to their home as soon as possible. And we are doing everything to create conditions in Syria for such a return," Lavrov said at a joint press conference after a meeting with Tunisian Foreign Minister Khemaies Jhinaoui.

Syria is currently engaged in post-war reconstruction and has already welcomed back tens of thousands of refugees who were forced to seek asylum in other countries over the course of the war.

Over 200,000 refugees have returned to Syria as of January 24, according to the Russian Defence Ministry.