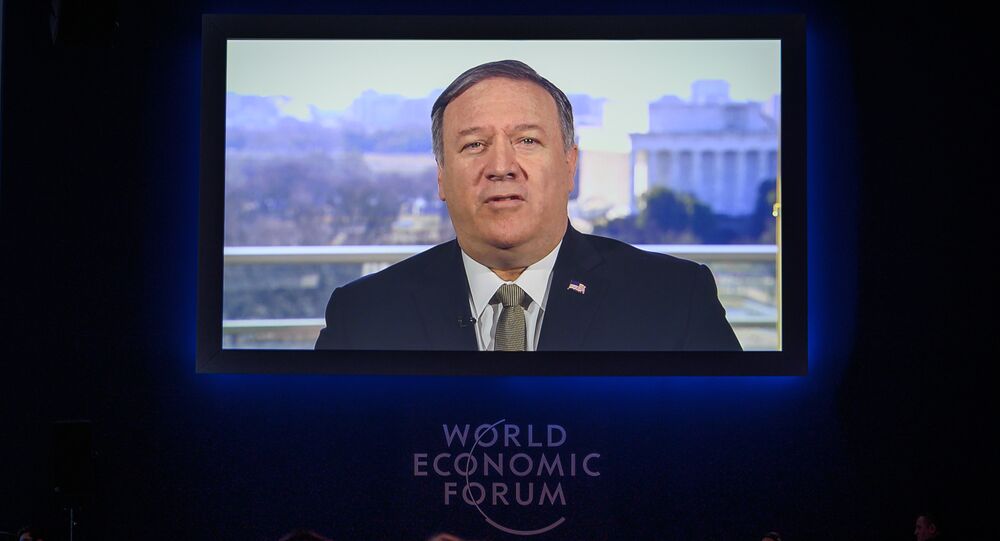 Although President Donald Trump has cancelled the US delegation’s trip to the World Economic Forum in Switzerland due to the ongoing partial government shutdown, US Secretary of State Mike Pompeo still got the chance to address business elites by video.

Delivering a long-distance speech to the World Economic Forum in the Swiss city of Davos, US Secretary of State Mike Pompeo has defended what he called a “positive disruption” in international politics:

“New winds are blowing across the world. The central question is this: Do they signal fair weather or foreshadow a storm. Is this pattern of disruption a force for good or not?  I’d argue that this disruption is a positive development. Truths like this: Nations matter. No international body can stand up for a people as well as their own leaders can. Strong borders are key to strong nations”.

Pompeo cited Donald Trump’s election, the UK’s vote to leave the European Union, as well as the rise of the Five Star Movement in Italy and the election of Brazil’s President Jair Bolsonaro as evidence that democracies were taking back control.

The secretary of state further pointed to the 2017 election in France of Emmanuel Macron, as well as the electoral comeback of Malaysian Prime Minister Mahathir Mohamad last year after corruption allegations against his predecessor.

“Over the past few years, all around the world, voters have turned out politicians and political alliances that they thought were not representing their interests. In Ohio, Rio de Janeiro, and in Rome, people are asking questions that haven’t been asked, or at least haven’t been taken seriously, in an awfully long time. Is economic globalisation really good for me? Are our political leaders adequately protecting us from threats like terrorism? Are they working to secure our national interests abroad?” he said.

© AP Photo / Michel Euler
What You Need to Know About World Economic Forum in Davos
Without directly mentioning any specific organisations, Pompeo said that established institutions would have to be reformed to adjust to the 21st century.

Pompeo elaborated that Washington was “rebalancing the relationship with China, alongside partner nations in Asia and all around the world”.

While addressing the US-China trade war, he said that the row could be resolved if Beijing agreed to accept the principles of “fair” and open trade and protection of intellectual property.

“There are those who say that a superpower conflict between our countries is inevitable. We don’t see it that way”, he said, at the same time expressing optimism for the next round of talks, slated for 30-31 January.

In a wide-ranging Q&A, Pompeo said that he expected to achieve more progress by the end of next month in nuclear talks with North Korea. “We’ll have another good marker along the way” with Pyongyang by the end of February, he said.

Pompeo was supposed to arrive in Davos, along with Treasury Secretary Steve Mnuchin, but their trip was cancelled due to the longest partial government shutdown in the history of the US.

Just moments before Pompeo’s speech, President Trump took to Twitter to address his absence from the economic summit:

The US government shutdown entered day 33 on Wednesday as Democrats and Trump fail to reach consensus on the funding of a wall on the US-Mexico border to stem the flow of illegal migrants. While POTUS has been pushing for $5.7 billion in funding, the Democrats suggested allocating only $1.3 billion for the construction, which Trump rejected.