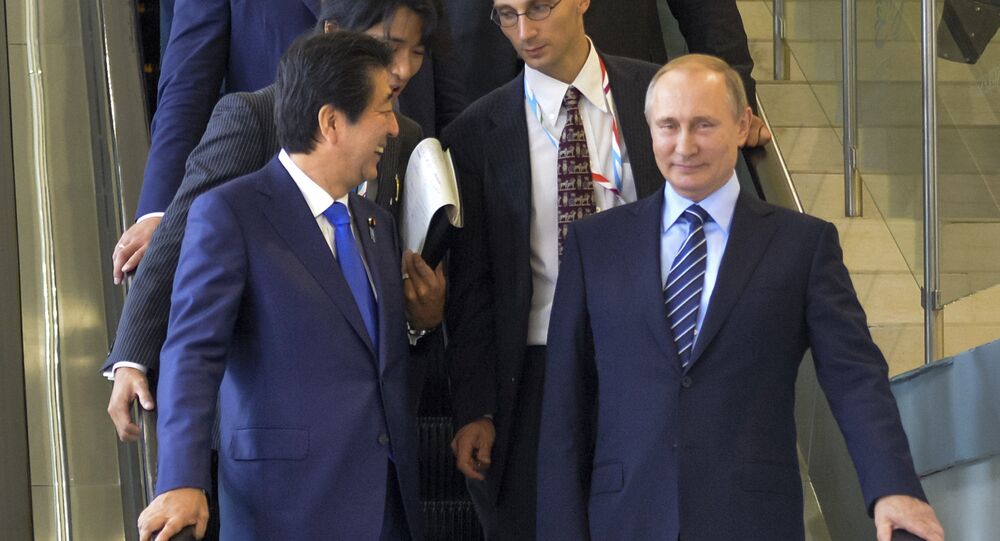 “I will stress: hard work lies ahead to create conditions for reaching mutually acceptable solutions,” Putin said, speaking about the prospects for signing a peace treaty.

He said the discussion of the peace treaty prospects with Abe had taken much time earlier in the day. After talks with Abe Putin said the treaty's terms must be acceptable to both nations and should be supported by them.

Putin went on to say that Russia and Japan note positive tendencies in economic cooperation, but a qualitative shift has not yet occurred.

"If we talk in general, then Russia-Japan economic cooperation is moving positively, there are obvious achievements. However, in our common opinion with Mr. Shinzo Abe, there has not been a qualitative shift yet, and the potential of cooperation between the two countries is not fully used," Putin told reporters following talks with the Japanese prime minister.

READ MORE: 7 Things to Know About Kuril Islands Dispute Ahead of Putin-Abe Talks

He stressed further that Russia and Japan could increase trade turnover by 50 percent to $30 billion.

Commenting on the negotiations with the Japanese prime minister, the Russian leader said that they were held in a businesslike and constructive atmosphere.

© Sputnik / Alexei Druzhinin
Russian President Putin, Japanese PM Abe Hold Joint Presser (VIDEO)
The Japanese prime minister also commented on the talks saying that he and Putin reaffirmed their commitment to the conclusion of the peace treaty, which the two states have been unable to sign since the end of the World War II because of the dispute over the Kurils.

Shinzo Abe said Tuesday after negotiations with Russian President Vladimir Putin that they had spoken openly about the peace treaty the two countries have yet to sign and welcomed the start of the negotiations on it.

On Future Cooperation and Talks

© Sputnik / Sergei Guneev
Tokyo's Claims to Kuril Islands Will Complicate Abe's Talks With Putin - Russian President's Aide
The Japanese prime minister added that he and Putin had instructed the foreign ministers to hold another meeting in February, possibly on the sidelines of the Munich Security Conference.

Later in the day, Kremlin spokesman Dmitry Peskov also voiced his insights on Russia-Japan relations saying that it was necessary to build mutual trust through the development of trade and economic cooperation, as it will allow to move forward on the issue of concluding a bilateral peace treaty.

"It is necessary to improve the atmosphere of mutual trust. The best way to do this is to develop trade and economic cooperation in every possible way and in all possible areas," Peskov told reporters following talks between Russian President Vladimir Putin and Japanese Prime Minister Shinzo Abe in Moscow that continued for three hours.

Peskov stressed that "this atmosphere will allow achieving progress on the main issue [the peace treaty]."

The spokesman added that new rounds of talks between Moscow and Tokyo will be held in the future.