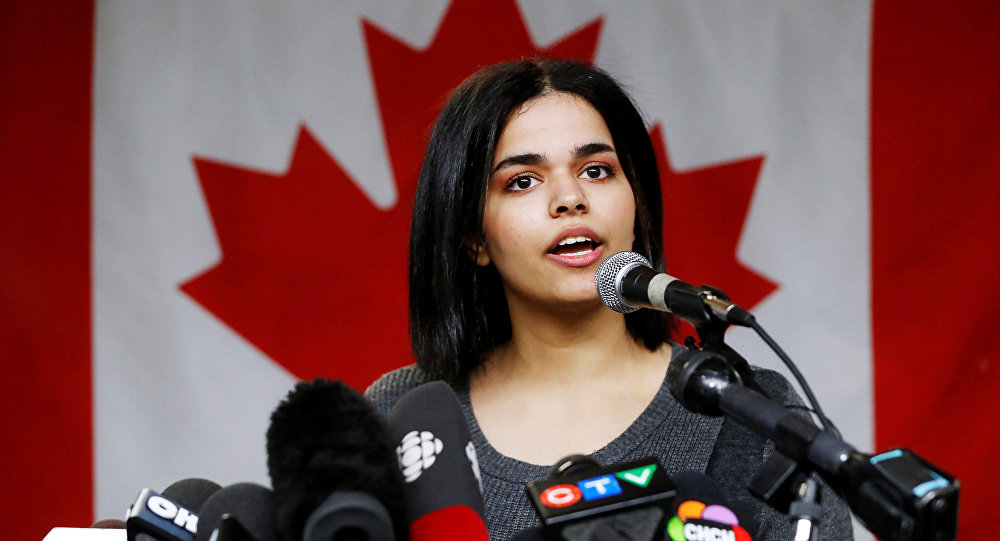 The young Saudi now frequently posts pictures on social media of how she is adapting to a “free” life in Canada; however, not all Internet users seem to appreciate the Western lifestyle, defending the social norms in her native land.

18-year-old Saudi girl Rahaf Mohammed arrived in Canada over the weekend after a week in limbo in Bangkok, where she barricaded herself in a hotel room, tweeting from her personal account that she was trying to escape “abuse” back home and earning a massive following.  Her family has meanwhile denied misconduct allegations.

Before that, she fled Saudi Arabia, jetting out to Kuwait, and then to Thailand, aiming to ultimately arrive in Australia and request asylum there. Canadian authorities took interest in the girl’s fate, after the UN refugee agency drew attention to her plight, and offered her asylum. While settling into her Canadian home, she has recently uploaded a picture as a symbol of her brand-new life, sporting a typical breakfast with bacon and a cup of Starbucks, with the girls’ bare legs also visible in the snapshot.

Mohammed renounced her surname, al-Qunun, to fully embrace the present moment, having broken away from her family. However, the other side of the story is less positive, since the girl, who quit Islam, has faced multiple threats on the Internet, as reported by Mario Calla, head of the immigration services company helping Mohammed upon the government’s request. To address the issue, Calla said that he had hired a security guard so that “she is never alone”, adding that the agency is taking the threats very seriously.

Speaking at a press conference and then taking to Twitter, Mohammed thanked the Canadian, Thai and the UN authorities, dwelling on the much-coveted freedoms she has now obtained, to make her own decisions on marriage, career and other matters. She further stressed her intention to work in support of freedom for women around the world, thereby referring to her native kingdom’s conservative social rules, namely a requirement that women have the permission of a male “guardian” to travel.

The Canadian authorities’ move was, however, taken with a pinch of salt by some Twitterians, alleging that the move was political:

Canada is using Saudi Girls for political purposes, not for humanity as they say!!#ترجمات_عبدالله_الخريّف#رهف_القنون pic.twitter.com/VKe2ejz83z

There were also multiple women who blasted the rebellious teenager, saying that they live like “princesses” back home in the Saudi kingdom, unlike many in Europe:

We love Saudi girls do not represent one girl I went to you We are very happy in the Kingdom of Saudi Arabia We have a life for all women Very beautiful and comfortable We live as princesses and not homeless in the streets as you have pic.twitter.com/92ArrIYho5

#Saudiwomanspeakup I’m a saudi muslim girl and i’m so thankful
May god bless my beautiful country🇸🇦💚💚💚!!
PLEASE STOP TALKING ABOUT US
IT’S NON OF YOU BUSINESS

One user adduced a photo-collage, showing the hilarious difference between how the Saudi girl was treated in Canada and how local girls are:

Another suggested that the Saudi girl from an obviously well-off family is not the one who was in desperate need of help:

Western and global media raced to highlight the escape of a Saudi girl from her family
And rushed political leaders from Australia and Canada to find them and help in the rebellion And forget that how really need the help and suport from other country pic.twitter.com/RJ7NOpeyw7

Over the past years, the Saudi kingdom has rolled out a massive social reform programme championed by the crown prince, which has now reached a diversity of fields, from granting women the right to drive unaccompanied, to making female citizens eligible for military service.

The initiatives are but the latest additions to the so-called Vision 2030 reform programme launched in a bid to socially reform the conservative top oil-producing country.  Separately, Saudi women are no longer barred from entering movie theatres and stadiums to watch men’s football matches.

Addressing the conservative dress issue, Sheikh Abdullah al-Mutlaq, a member of Saudi Arabia's Council of Senior Scholars, asserted earlier that while women should be required to dress modestly, they should not be compelled to wear the abaya, a robe-like form of clothing fully covering the body.