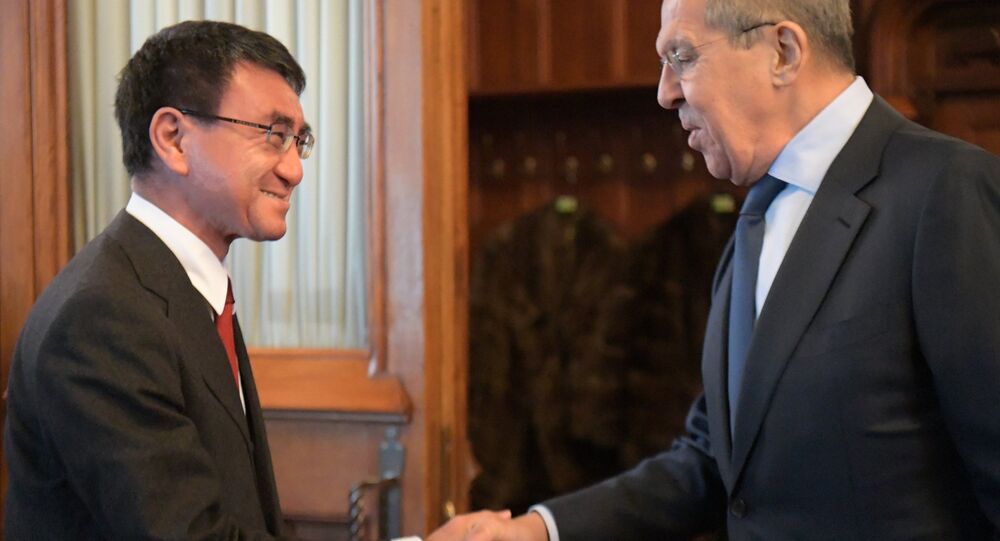 Speaking to his Japanese counterpart Taro Kono, Russian Foreign Minister Sergei Lavrov said that Russia questioned Tokyo's independence at the talks with Japan in light of a Japanese official's statement that the US was interested in the ongoing talks.

According to the head of the Russian foreign policy, there are still significant disagreements between Russia and Japan around the peace treaty. The minister added that it would be hard to expect any progress in talks without Japan's recognition of Russian sovereignty over the South Kuril Islands.

"We still have significant disagreements [over the subject of the peace treaty]. Initially, [our] stances [on the issue] were diametrically opposed… But the political will of our leaders to fully normalize relations between Russia and Japan prompts us to intensify this dialogue," Lavrov said.

Lavrov stressed that Russia and Japan had reaffirmed their commitment to work based on the 1956 Joint Declaration.

"Which means, first of all, the inalterability of the very first step — Japan's recognition of the World War II outcome in full, including Russia's sovereignty over all the islands of the South Kuril ridge," the minister added.

Moscow has pointed out to Japan that US moves to develop a missile defense system in Japan jeopardized Russian and Chinese security and contributed to the militarization of the region, Russian Foreign Minister Sergey Lavrov said on Monday.

"During negotiations, we have drew attention [of Tokyo] to the steps that the United States was taking to develop its global missile defense system on the Japanese territory — the actions that are aimed at militarization of this part of the globe and that the United States formally justifies by the need to neutralize what they call the North Korean nuclear threat. But in fact these actions create risks for Russian and Chinese security," Lavrov said at a press conference after talks with his Japanese counterpart, Taro Kono, in Moscow.

Speaking further, Lavrov noted that there were no reasons for Russian and Japan not to introduce the visa-free travel, beginning with residents of Russia's Sakhalin and Japan's Hokkaido.

"We have drawn the attention of our colleagues to the fact that over the past years Russia has offered many initiatives to either facilitate movement of certain categories of citizens — businessmen, tourists, participants of sports and cultural events — and introduction of visa-free travel. This is our global objective. We believe that there are no reasons for Russia and Japan not to introduce visa-free travel, beginning, for example, with residents of Sakhalin and Hokkaido," Lavrov told reporters after the talks.

© Sputnik / Konstantin Salomatin
Japan to Propose Russia Abandon Mutual Compensation Claims on Kurils - Reports
The visit comes amid the start of the first round of Russia-Japan negotiations on a peace treaty, which has been stymied by a long-standing territorial dispute between the two countries.

The main issue standing in the way of a treaty is an agreement concerning a group of four islands that both countries claim — Iturup, Kunashir, Shikotan and Habomai, collectively referred to as the Southern Kurils by Russia and the Northern Territories by Japan.