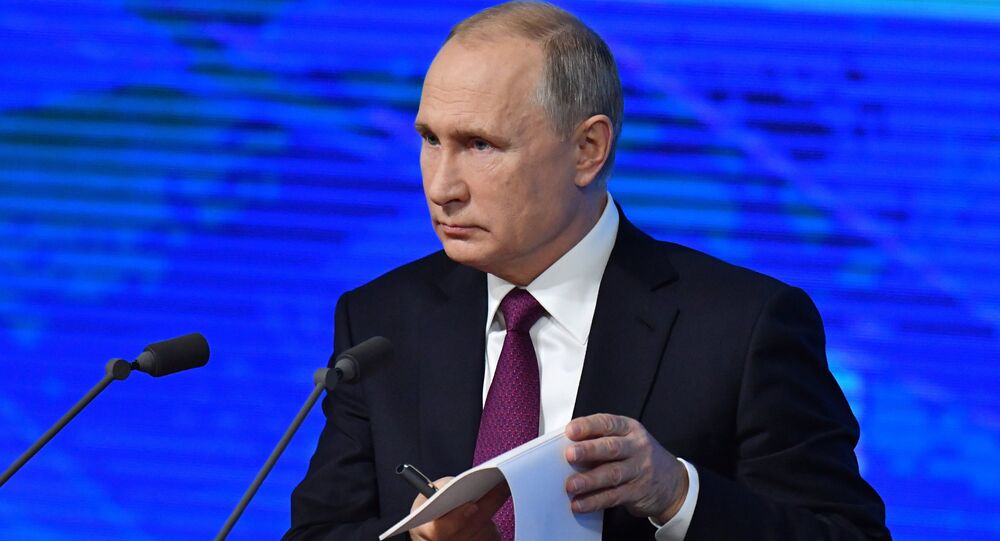 Earlier, UK Defence Secretary Gavin Williamson boasted that Britain's new fleet of F-35s served as a message to the country's "enemies", including Russia, not to "mess with" Britain.

Moscow is perplexed by the militaristic tone taken by the UK Ministry of Defence, and will respond appropriately if Russia's security is threatened, Russian Foreign Ministry spokeswoman Maria Zakharova has said.

"The statements of the Minister of Defence of Great Britain in favour of the further militarisation of British politics bring forth, at the very least, bewilderment," Zakharova said, speaking at a press conference on Friday.

"Naturally, in the event of the implementation of any measures which pose a threat to the security of Russia or that of our allies, our country reserves the right to take adequate measures in response," the spokeswoman added.

Earlier, speaking at a ceremony to announce the readiness of the Royal Air Force's new F-35 Lightning II fighters in Norfolk, Defence Secretary Gavin Williamson said Britain's new fifth-gen planes sent a message to the UK's "enemies", including Russia. "It means don't mess with us, because we have the capability and we have the people, and we have the will to always defend ourselves," he said.

The UK invested 100 million pounds to secure its nine new F-35s as part of a wider 425 million pound program to upgrade the RAF's capabilities. Speaking at the unveiling ceremony, RAF Chief Sir Stephen Hillier boasted that the air force was "more lethal now than we have ever been," adding that the RAF was "now prepared to deploy this capability worldwide on operations, should the need arise."

Williamson said the UK was still committed to purchasing a total of 138 F-35s in the future. For now, he said, the UK has "the capability, with nine ready to fly, nine ready to fight. We look forward to expanding that number. We see it as both a defensive and offensive weapon."

© Sputnik
Honeytrap
The F-35 programme has been beset by a multitude of issues, with Britain's military no stranger to the plane's finicky nature. Last June, British defence officials expressed annoyance after a consignment of 'all-weather' F-35s for Britain failed to arrive in Norfolk, UK on time due to bad weather over the Atlantic Ocean. Defence sources also told British media that the plane has only one engine, which prevents the plane from being able to cruise to safety if something goes wrong during a flight, and that this gave cause for concern. Also last summer, an RAF staffer got in trouble after leaking secrets about the F-35 programme via the Tinder dating app.

The US grounded its entire fleet of F-35s late last year in the wake of a crash. Earlier, Congressional accountants warned that the F-35 programme still has some 966 flaws, including over 100 critical defects which can injure or kill pilots or otherwise jeopardise the aircraft's security.

Beginning development in 2001, Lockheed Martin's F-35 programme has posted mach-level expenses; it is estimated to cost a staggering $1.5 trillion over its entire lifetime, making the jet by far the most expensive piece of military hardware ever created or fielded. As of 2018, about 300 planes have been delivered to various branches of the US armed forces, as well as those of its British, Israeli, Australian, Italian, Japanese, Dutch, Norwegian, and South Korean allies.