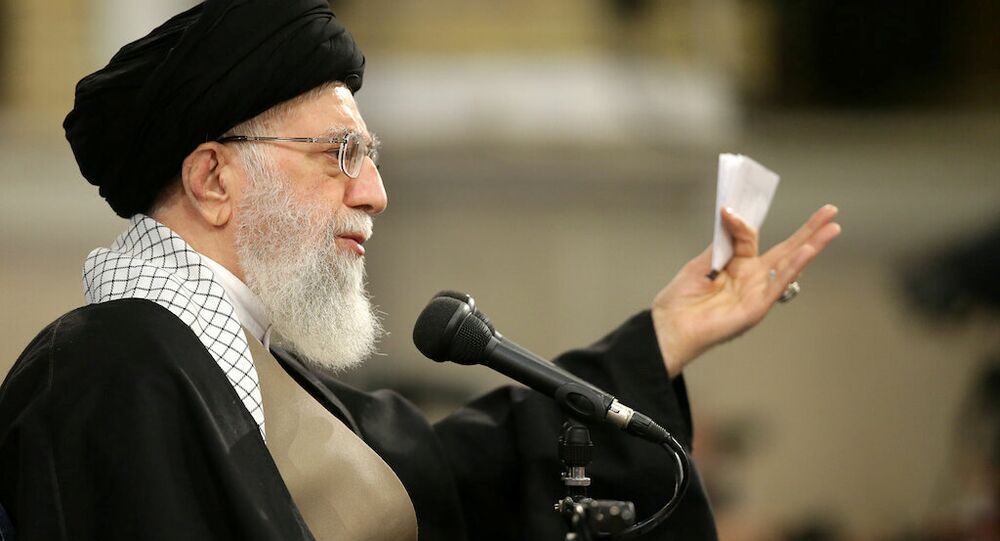 'First-Class Idiots': Iran's Supreme Leader Takes a Quip at 'Some US Officials'

Earlier, the Iranian Supreme Leader tweeted that the United States sought to paralyse Iran's economic growth by introducing sanctions, but that actually they only strengthened Tehran's self-sufficiency.

In a speech in Tehran on Wednesday, Iran's Supreme Leader Ayatollah Ali Khamenei lashed out at "some US officials", casting doubt on their mental ability.

"Some US officials pretend that they are mad. Of course I don't agree with that, but they are first-class idiots", Khamenei said, as quoted on his official Twitter account.

Separately, he touched upon what he described as "unprecedented" US sanctions against Iran which Khamenei said "do put pressure on the country and the people".

The remarks came after Khamenei told a public gathering in November that the United States had failed to reassert its dominance over Iran since the country's 1979 Islamic Revolution, which resulted in the overthrow of the US-backed Shah.

"America's goal has been to re-establish the domination it had [before 1979] but it has failed. America has been defeated by the Islamic Republic over the past 40 years", he pointed out.

Earlier on his Twitter page, Khamenei commented on Washington's anti-Iranian sanctions, claiming that "the US goal in imposing sanctions is to paralyse and prevent the growth of the national economy; but it resulted in a movement towards self-sufficiency in Iran."

© AP Photo / Office of the Iranian Supreme Leader
Iran's Supreme Leader Calls US Missile Strike Against Syrian Airfield 'Strategic Mistake'
The remarks followed his banning the holding of any direct talks with the United States, which Khamenei claimed "never remains loyal to its promises in talks [and] just gives empty words".

US President Donald Trump announced the restoration of all sanctions against Tehran after he signalled Washington's withdrawal from the 2015 Iran nuclear deal, also known as the Joint Comprehensive Plan of Action.