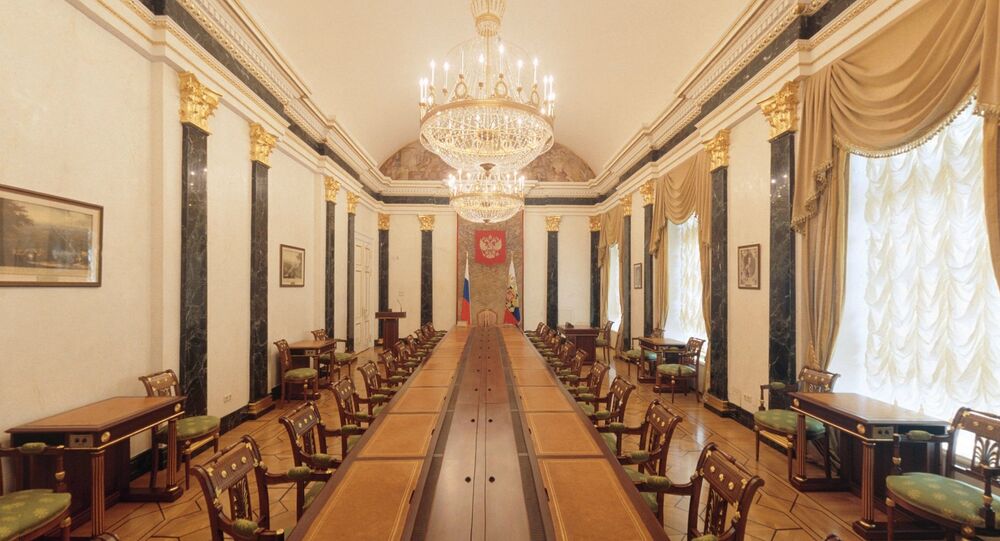 Moscow believes that the United States is seeking to radically change the nuclear missile balance in its favour, taking into account China’s growing military power, Alexander Venediktov, an aide to the Russian Security Council secretary, said in an interview with Sputnik.

"There is a feeling that Washington first made the decision to withdraw from the Treaty (INF) — and then began to seek a convenient excuse. The stumbling block is not the evidence base, but the US desire to radically change the global nuclear missile balance in its favour, taking into account the growing military power of China, which is not bound by any such treaties", Venediktov said.

The Russian Security Council believes that there is currently no need to create new international institutions, the main task of the world community is to strengthen the UN, Alexander Venediktov stated.

"We believe that today there is no need for qualitatively new institutions. It is more important to engage in the improvement of existing, time-tested structures", said Venediktov.

Unprecedented pressure was exerted on Russia in 2018 to force Moscow to give up its positions in key areas of politics and economics, Alexander Venediktov added.

Alexander Venediktov stressed that Russia is preventing the United States and its allies from pursuing a policy of interfering in the internal affairs of sovereign states, adjusting their political and economic architecture to their interests, promoting their own rules of the game, and then changing them when convenient.

READ MORE: US Confirms Its Commitment to Withdrawing From INF Treaty — Russian FM

The United States can not provide explanation of why the country's defense facilities in Europe are equipped with launch complexes that can be easily upgraded to fire Tomahawk missiles, banned under the Intermediate-Range Nuclear Forces Treaty (INF), Alexander Venediktov stressed.

"The Americans repeatedly accused us of violating the [Intermediate-Range Nuclear Forces Treaty]. Russia is accused of allegedly designing and testing a banned missile. At the same time, no specific evidence has yet been presented. Also, it was not explained why the US facilities in Europe have missile complexes which can be loaded with Tomahawks to be launched in the direction of Russia," he said.

"The West's commitment to the policy of double standards in relation to Russia and the ongoing attempts to shake the internal political situation in our country made themselves felt with a particular force," he said.

A dynamic dialogue has been established between Russian Security Council Secretary Nikolai Patrushev and US National Security Adviser John Bolton, and their personal meetings are supplemented with operational contacts, Alexander Venediktov stressed.

"As of today, quite a dynamic exchange of opinions has been established between Patrushev and Bolton. Their personal meetings are supplemented with operational contacts. We discuss a great range of issues with Americans, including our bilateral relations, and regional problematics —Syria, Iranian nuclear dossier, the Korean Peninsula, arms control, information security, cooperation on terrorism fight, and law enforcement cooperation," Venediktov said.

Venediktov stressed that Russia was ready for cooperation despite all obviously anti-Russian steps.

"And in this context, the contacts between our countries' security councils acquire special importance," Venediktov said.

© Sputnik / Maksim Blinov
Russian Foreign Minister Believes US Policy on Russia Was Delegated to Bolton
"The very existence of this dialogue is already a big achievement that gives hope for gradual leading of the relations out of crisis. Together with our US partners, we have conducted comprehensive review of mutual concerns over key points of the security agenda. We have exchanged a range of position papers: memorandums and road maps in which existing problems are outlined, as well as possible ways to solve them," Venediktov added.

He praised the constrictive attitude of the US partners.

"In general, we register quite business-like and constructive attitude of our US partners during consultations. Mister Bolton and his colleagues express readiness to work on concrete issues and to take some practical steps instead of just exchanging diplomatic pleasantries. Certainly, not words but actions show the level of any cooperation. As we see it, the basis has already been created. We'll see it later if both sides are able to make use of what we already have," Venediktov concluded.

Relations With France and Italy

© Sputnik / Mihail Kutusov
France Sees Prospects for Development of Economic Relations With Russia Despite Sanctions
The Russian Security Council managed to bring the dialogue with Italy and France to a qualitatively new level in 2018, Alexander Venediktov added.

"We managed to significantly expand our international contacts, including among Western partners. For example, we managed to bring the dialogue with France and Italy to a qualitatively new level. These states send a clear signal that even in the current difficult conditions they consider it unpromising to refuse to cooperate with Moscow in solving the main problems of international security" Venediktov said.