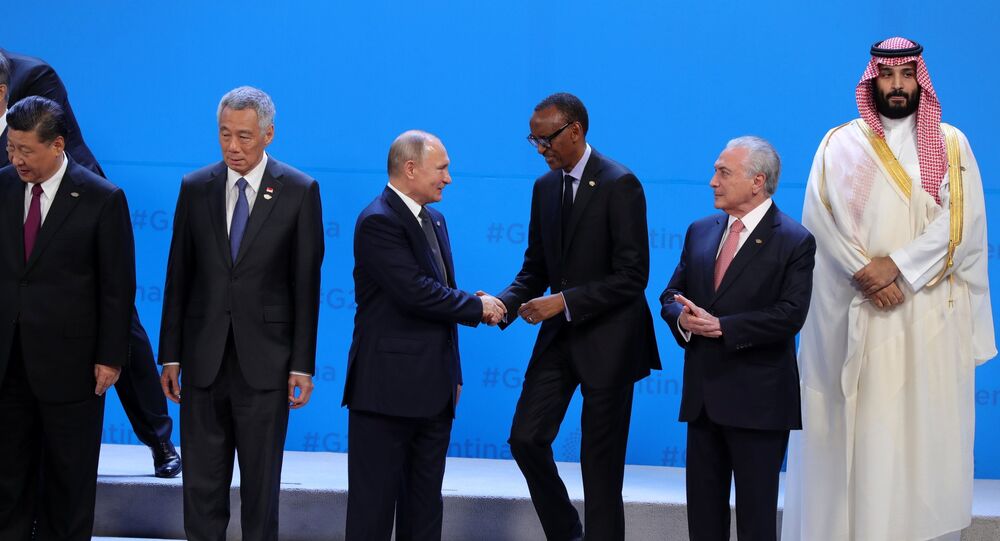 WASHINGTON (Sputnik) - Human Rights Watch has claimed that Saudi Crown Prince Mohammed bin Salman has moved from a luxury hotel to the nation’s embassy in Buenos Aires as Argentine prosecutors had begun a probe into what they described as "Saudi war crimes" in Yemen and alleged human rights abuses, including the recent murder of Jamal Khashoggi.

"His [bin Salman’s] visit to Argentina was supposed to help him rebuild his shattered reputation after the murder of the Saudi journalist Jamal Khashoggi," the release said. "But Argentine judicial authorities have turned back that effort as they take steps toward investigating the crown prince’s connection with alleged war crimes by the Saudi-led coalition in Yemen and torture by Saudi officials."

The rights group claimed, citing reports in the Argentine media, that Bin Salman had been scheduled to stay with his 400-member delegation at a luxury hotel, but instead moved to the Saudi embassy, which has turned into a fortress with metal barricades and bullet-proof windows that were added this week.

© AP Photo / Jacquelyn Martin
Turkish FM Claims Saudi Suspect in Khashoggi Killing 'Likes to Cut Up People'
In a November 26 submission, Human Rights Watch asked the Argentine federal prosecutor to examine the crown prince’s possible responsibility for torture of Saudi citizens in government custody — including Khashoggi who was murdered on October 2 — and violations of international humanitarian law in Yemen.

Argentina assigned a federal prosecutor to the case, who initially endorsed the principle of universal jurisdiction, which allows judicial authorities to investigate and prosecute international crimes no matter where they were committed, and regardless of the nationality of the suspects or their victims, Human Rights Watch said.

The prosecutor and an investigating federal judge also requested information from other governments on the status of investigations elsewhere into these allegations, and from Argentina’s Foreign Ministry on the crown prince’s diplomatic and immunity status in Argentina, according to the Human Rights Watch.

Since a formal investigation will take time and bin Salman will be in Buenos Aires for a few days, it is unlikely the Saudi crown prince will be vulnerable to questioning or arrest in Argentina, but the release posited that legal woes could prevent future visits by Saudi Arabia’s de facto ruler to many countries, especially nations that recognize universal jurisdiction, the release concluded.