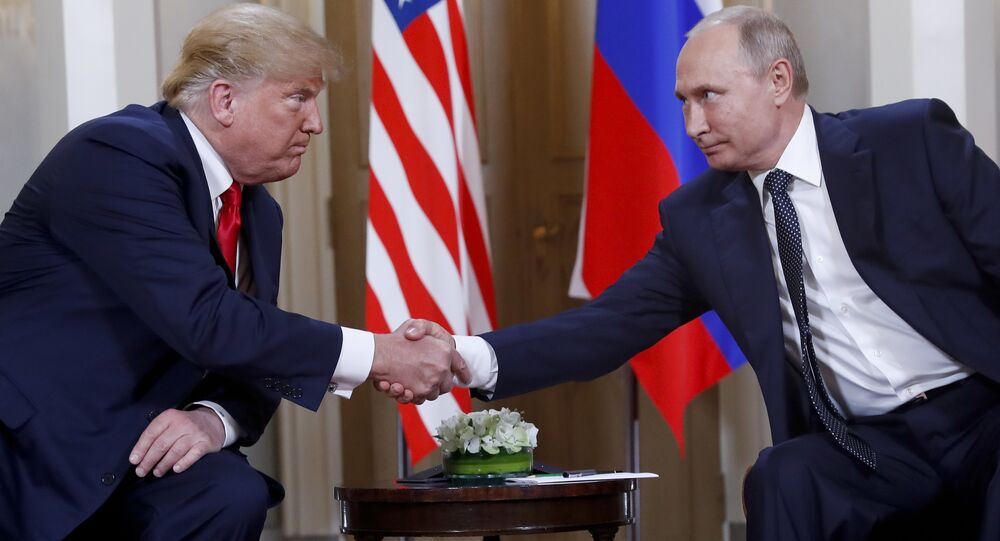 Wag the Dog? Twitterati Crack Down on Trump's U-Turn on G20 Meeting Putin

Donald Trump abruptly cancelled his G20 meeting with Vladimir Putin in a bid to distract the US media from the new confessions of his former lawyer Michael Cohen, CNN's senior White House reporter Jeff Zeleny suggested.

Less than an hour after President Trump said it was a "very good time" to have a meeting with Putin, he has just decided to cancel the meeting. Sounds like someone is trying to change the subject here — as he watches TV flying to Argentina?

Pointing out that Trump's sudden U-turn came shortly after he told reporters that it was "a very good time to have the meeting [with Putin]", Zeleny hinted that the POTUS could be trying to "change the subject".

On Thursday, Donald Trump announced his decision to cancel talks with President Vladimir Putin over Russia's naval stand-off with Ukraine. Three Ukrainian Navy vessels were seized on Sunday after they moved through the Kerch Strait from the Black Sea, illegally entering Russia's internal territorial waters.

A handful of social media users apparently have similar suspicions.

That happened days ago! What changes your mind? Cough * Cohen * cough

Maybe Michael Cohen will help to set up that summit.

Trump's move came the same day his ex-lawyer, Michael Cohen, pleaded guilty to lying to US Congress about Trump's real estate project in Moscow. Cohen, who worked on a deal to build a Trump Tower in the Russian capital, previously testified before the Senate Intelligence Committee that talks about it ended in January 2016, before the Iowa Republican caucuses. On Thursday, he confessed that the discussions continued until June 2016, when Donald Trump had already become the GOP presidential candidate.

Donald Trump in response accused his long-time right hand of lying and called him a "weak person and not a very smart person". "He's lying, very simply to get a reduced sentence."

Trump argued that he was ready to strike a deal to build the skyscraper in Moscow, but scrapped the plans as he was focused on the fight for the top job in the White House. He also maintained that the proposed deal did not violate the law. "There would have been nothing wrong if I did do it. If I did do it, there would have been nothing wrong. That was my business," he said.

Rudy Giuliani, the president's lawyer and a former New York mayor, insisted that Cohen's comments did not contradict Trump's account of his business dealings with Russia. Guiliani claimed that Trump was not asked to provide any specific dates for his conversations with Cohen and did not do so. "As far as he knew, there was a proposal [on a Trump Tower Moscow deal] — he (Donald Trump) did discuss it with Michael Cohen and signed a non-binding letter of intent and it never went beyond that," he said.

It also emerged on Thursday that Cohen had struck a cooperation agreement with Special Counsel Mueller amid the FBI's ongoing investigation into Russia's alleged meddling with the 2016 election, as well as collusion between Moscow and the Trump Campaign, which both Russia and Trump deny.

One of the centerpieces of the probe is a meeting between Donald Trump Jr. and a Russian attorney at Trump Tower in New York in 2016. While Donald Trump Jr. told the press that the meeting was held to discuss adoptions of Russian children by Americans and the Magnitsky Act, Rudy Guiliani admitted in August that it was arranged to "get dirt on [then Democratic presidential candidate Hillary] Clinton."

Trump also acknowledged that the meeting sought to get damaging information on Clinton, but claimed that it was "totally legal." Additionally, CNN reported on Wednesday that the president wrote to Mueller that he was not aware of the meeting despite Cohen's claims that he knew about it before it took place.