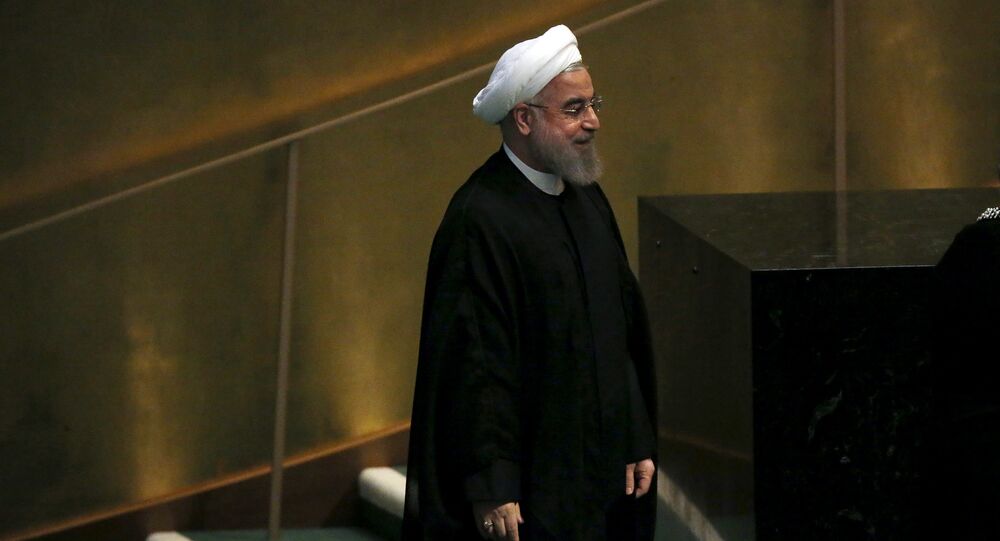 Earlier this week, Iranian President Hassan Rouhani called on Muslim nations to unite against Israel, which he labelled an agent of Western influence.

The European Union on Saturday condemned the Iranian president's remarks, in which he compared Tel Aviv to a 'cancerous tumor' in the Middle East.

"President Rouhani's remarks bringing into question Israel's legitimacy are totally unacceptable," an EU spokesman said in an official statement. "They are also incompatible with the need to address international disputes through dialogue and international law".

"The European Union reiterates its fundamental commitment to the security of Israel, including with regard to current and emerging threats in the region," the bloc's statement notes.

© Sputnik / Aleksey Nikolskyi
Rouhani Calls Israel a ‘Cancerous Tumor,’ Tel Aviv Disagrees With Assessment
Earlier on Saturday, Rouhani, who spoke before the annual Islamic Unity Conference, called on the Muslim world to unite against Israel, a state he claimed that Western nations had established as a means of exerting influence over the region.

"One of the ominous results of World War II was the formation of a cancerous tumor in the region," Rouhani said.

"I strongly condemn the recent unacceptable statements by President Rouhani relating to Israel. It is absolutely unacceptable when Israel's right to exist is questioned or Israel's destruction is being urged," he tweeted. "Because of our historical responsibility, the decisive combat against all forms of anti-Semitism and the support for Israel are especially important to us. For Austria, Israel's security is non-negotiable".

Rouhani is known as a relatively moderate leader and it is unusual for him to resort to such harsh rhetoric, the Times of Israel noted.

During his speech, Rouhani called on Saudi Arabia, Iran's rival and an ally of the US, to join other Muslim nations, referring to the Saudis as 'brothers,' and hinting that Tehran's friendship does not require a '$450 billion arms deal' — a hint toward a major arms deal that is in actuality only valued at some $110 billion — concluded with Washgionton by Riyadh in 2017.

© AP Photo / AP photo
Number of Injured by Powerful Quake in Western Iran Hits 361 - Reports
Rouhani's remark more closely resembles the rhetoric of Supreme Leader of Iran Ali Khamenei, who routinely calls Israel a 'cancer' that must be removed, the Times of Israel noted. Khamenei has called Israel 'barbaric,' 'infanticidal,' and the 'sinister, unclean rabid dog of the region'.

Israel perceives Iran as the main threat to its existence. In order to counter this threat, Tel Aviv recently embarked on a strategy of normalising international relations with Sunni Arab states including Jordan, Oman, and Saudi Arabia.

Washington, which reportedly exerts pressure on Israeli Prime Minister Benjamin Netanyahu in exchange for consistent foreign aid, believes that wider recognition of Israel in the region might pave the way to solving the Israeli-Palestinian conflict.