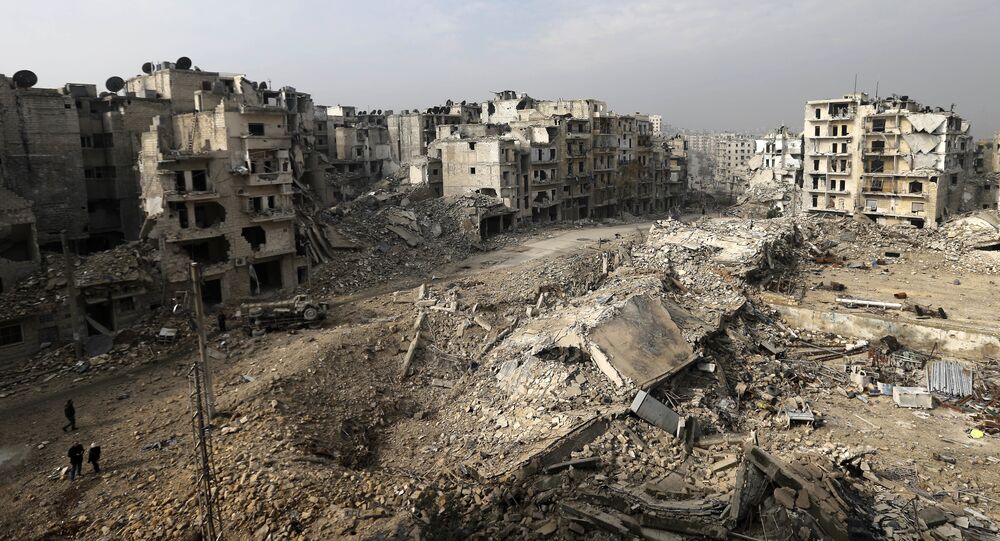 Moscow and Damascus have repeatedly accused the White Helmets NGO of staging a number of provocations in Syria involving chemical weapons attacks to influence public opinion and provide foreign powers with a justification for interventions in the Arab country.

The Russian Defence Ministry has confirmed the use of chlorine-filled shells during the November 25 terrorist attack on the Syrian city of Aleppo.

The ministry did not rule out that the White Helmets non-governmental organization could be behind the attack, in which more than 70 civilians were injured. The Syrian Arab News Agency (SANA), in turn, reported that at least 107 people were wounded.

"According to preliminary confirmed data, particularly the symptoms of poisoned victims, the shells that were fired at residential areas of Aleppo had been filled with chlorine," Russian Defence Ministry spokesman Maj. Gen. Igor Konashenkov said.

He stressed that Russia had earlier drawn attention to the fact that the White Helmets group had been trying to organize provocations using chemical agents in the demilitarized zone around Idlib to accuse government forces of using banned weaponry against the local population.

"It is clear that White Helmets are directly connected with terrorist organizations operating in Syria, and in particular, in the Idlib de-escalation zone," Konashenkov pointed out.

He added that groups from the observation posts of the specially-equipped radiation, chemical and biological protection units stationed in Syria immediately arrived in the area where the shelling happened.

"They work with the injured, who are taken to medical institutions, and monitor the situation in the area where the militants used poisonous substances," Konashenkov said.

At Least 73 Injured in Aleppo Attack

He was echoed by Hussein Diyab, governor of the Syrian province of Aleppo, who said that an increase in the number of injured civilians in the attack is confirmation of the possession of chemical weapons by terrorists.

His remarks came after Shervan Sheho, an emergency room doctor at a hospital in Aleppo, confirmed that medical aid had been provided to 73 civilians.

"According to updated data, 73 civilians, including four children, were given medical aid after the Aleppo shelling. All of the hospitalized people have difficulty breathing and their eyes were watering. In medicine, this is called a gas allergy," Sheho said.

Earlier, the Russian Defence Ministry's Centre for Syrian Reconciliation reported that on Saturday evening, terrorist groups located in the Idlib de-escalation zone fired 120-millimeter shells at the north-western districts of Aleppo from the south-eastern part of the demilitarized zone.

The area is located near the village of Al-Buraykat, controlled by the militants of Hayat Tahrir Al-Sham, formerly the Nusra Front*. Shells filled with poisonous substances exploded in the area of Nile Street in the quarter of Al-Khalidia.

The Russian Centre for Syrian Reconciliation reported earlier this month that militants were preparing new chemical agent attacks in Syria. The Russian Defence Ministry in turn argued that terrorists from the Turkistan Islamic Party had delivered at least 20 containers filled with 10 litres of chlorine each to Syria.

The Ministry also warned that the Tahrir al-Sham terrorist group, affiliated with the Nusra Front, was planning a chemical attack against civilians in Syria to provoke Western nations into retaliating against Damascus.

Now, reports that more than 50 residents of #Aleppo, #Syria, have been admitted to the hospital with cases of suffocation. This is after extremists in #Idlib bombed residential areas in #Aleppo with possible chlorine chemical attack. Poor children, we pray all victims survive. 🙏 pic.twitter.com/lVlGrTCM9l

In late August, the Russian Centre for Syrian Reconciliation reported that White Helmets group have delivered a large shipment of toxic substances to a warehouse used by Ahrar al-Sham militants in Idlib province.

Although the White Helmets positions itself as a Syrian humanitarian organization that allegedly have saved tens of thousands of lives, the group's head Raed Saleh is accused of collaborating with terrorists, charges that he denies.

The Russian Foreign Ministry described White Helmets as a structure which "worked exclusively on territories not controlled by the government and hasn't avoided contacts with terrorists and extremists."

"On top of that, there is a lot of evidence proving that the White Helmets is virtually a branch of the terrorist organization al-Nusra, which is included in the UN Security Council's sanctions list," the Ministry said.

© AP Photo / Syrian Civil Defense White Helmets
White Helmets Have Been Staging Chemical Attacks to Give Pretext to US & Allies to Attack Syria – Prof
In this context, the Ministry urged the White Helmets's "Western sponsors to realize things as they are and stop defending those who are in actual fact provocateurs and extremists."

Damascus and Moscow accused the White Helmets of staging several provocations involving chemical weapons to justify foreign intervention in Syria. Back in April 2018, a staged chemical attack prompted the US-led coalition to strike Syria with well over 100 missiles.

The Russian Defence Ministry reported that the White Helmets could stage a chemical weapons attack in Syria's Idlib province, which would be followed by a US missile attack.