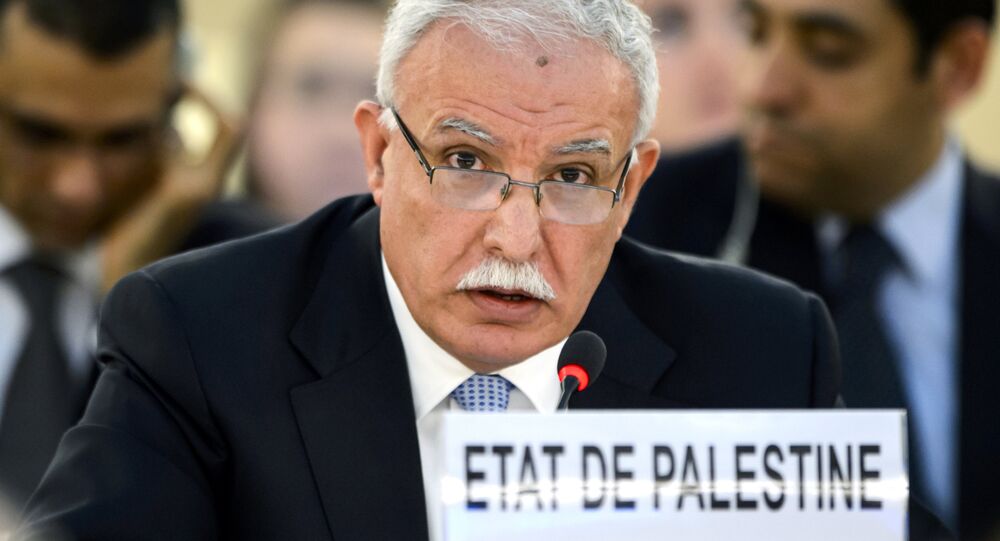 Ksenia Shakalova - The Palestinian National Authority fears that Benjamin Netanyahu will become more hostile toward Palestinians in order to secure re-election during a possible snap vote that might be held in the light of the recent resignation of Israeli Defence Minister Avigdor Lieberman, Palestinian Foreign Minister Riyad Maliki told Sputnik.

Lieberman stepped down in mid-November over disagreements with other cabinet members on the truce with Gaza militants. The official also withdrew his party from the ruling coalition with Netanyahu’s party, prompting concerns that the situation might trigger early elections.

"[There is] our fear that on the eve of potential elections in Israel, Netanyahu, in order for him to be re-elected, he will try to show his ugly face against the Palestinians, especially in Gaza by becoming very aggressive; [Netanyahu will] be renewing his assassination attempts against Hamas leaders and against certain targets within Gaza by devastating huge parts of existing infrastructure in order to show that he is more willing to do so than Liberman even [did] and, as a result, he deserves to be re-elected in the next elections," Maliki said on the sidelines of the Mediterranean Dialogues (MED) forum in Rome.

"I do expect now that whoever will come [for the defence minister position], especially if Netanyahu will take over the defence portfolio, he tries to show that he is more aggressive in dealing with Gaza than his predecessor… My fear is that right now this atmosphere of potential early elections in Israel will be [at] our expense," the diplomat suggested.

When asked, if Palestinians were interested in Israelis electing another prime minister instead of Netanyahu, Maliki said there was no difference "between Netanyahu No. 1, No. 2 or No. 3" as none of the Israeli officials recognised the Palestinians’ right to have their own state.

The Palestinian National Authority, dominated by the Fatah party, will observe the visit of the Hamas movement's delegation to Russia to determine the role that Moscow plays in convincing the group's leaders to bring an end to the conflict between the two rival forces, Riyad Maliki said.

"I know that there is a delegation from Hamas [that] will visit Moscow soon. This is what we heard. And maybe [Hamas political leader Ismail] Haniyeh [will be part of this delegation] himself. And therefore we want to follow this subject to see what can be said in Moscow with the delegation of Hamas, and thus stand on the role that can be played by Moscow to convince leaders of Hamas to end the split," Maliki said on the sidelines of the Mediterranean Dialogues (MED) forum in Rome.

There is a chance for the reconciliation between the Palestinian group Fatah and the rival Hamas movement to emerge from Egypt’s involvement in the peace process, Riyad Maliki said.

"I think that there is an opportunity [for the Hamas-Fatah reconciliation] these days, especially since the Arab Republic of Egypt, as a country carrying this file in the Arab world, is following this issue," Maliki said on the sidelines of the Mediterranean Dialogues (MED) forum in Rome.

Maliki noted the Egyptian authorities had invited a Hamas delegation to visit Cairo for talks with Egyptian intelligence officials on ways to end the movement's conflict with Fatah and to return the Palestinian national unity government to the Gaza Strip.

"We are waiting for any information about those talks that started in Cairo… and we hope that the Arab Republic of Egypt can convince the Hamas leadership that ending the division must be in the Palestinian interest… If successful, it will be a milestone and a major turning point in terms of uniting the Palestinian home and confronting existing threats that come from either the United States, Israel or elsewhere," Maliki pointed out.

Riyad Maliki said he would pay a visit to Moscow on December 21 to discuss bilateral relations and Russia's role in the Palestinian political process with Russian Foreign Minister Sergey Lavrov.

"I will personally visit Moscow on December 21 at Lavrov's invitation. We will, of course, discuss not only bilateral relations with the Russian Federation but also… possible breakthroughs in the political process and Russian-level efforts to restore the political process to its right track," Maliki said on the sidelines of the Mediterranean Dialogues (MED) forum in Rome.