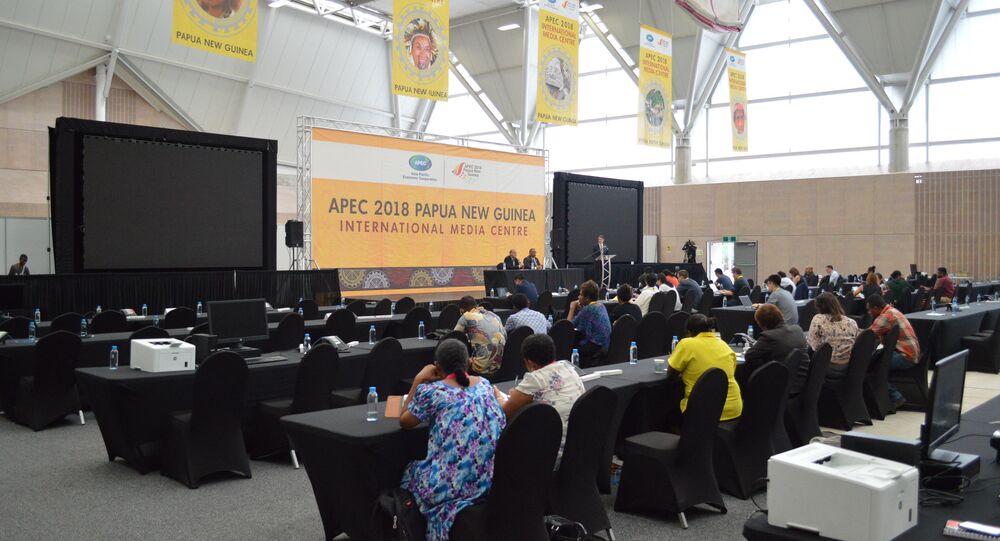 Participants at the Asia-Pacific Economic Cooperation (APEC) summit held in Port Moresby, the capital of Papua New Guinea, have postponed the adoption of a final declaration as they couldn't include some controversial points in the document.

Trade wars threaten the entire system, Russia is ready for talks on the issue, Russian Prime Minister Dmitry Medvedev told reporters, summarising the outcomes of the Asia-Pacific Economic Cooperation (APEC) summit, which came to an end in Papua New Guinea on 18 November.

"For the first time in this organisation's existence, it was unable to adopt a declaration. This is due to difficulties in international trade, with the very trade wars that have now unfolded across the world, and with the discussion that took place on the sidelines of the APEC summit. Unfortunately, this discussion did not allow us to adopt the final document," he said.

Unfortunately, the whole trading system has been put at risk as a result of decisions that have been made by some countries, the Russian prime minister noted.

"Let's face it: the whole story began with the decisions made by one of our partners — the United States. Therefore, at the moment everything looks quite difficult. Of course, we are ready to negotiate on this topic," he stressed.

The ongoing trade war is bringing benefits to some countries now, but in the end, there will be no winners in it, Medvedev stressed.

"[The trade war] is ongoing. And we are all witnessing that this war, in general, is already bearing some fruit to some countries that are trying to impose their course. On the other hand, there are expenses to world trade as a whole. Because, after all, as in any war of this kind, of course, there will be no winners here," Medvedev told reporters.

© Sputnik / Aleksandr Astafiev
APEC 2018 "Menu": Digital Economy, Countering Protectionism, with Geopolitics on the Side
The statement was made after Russian Prime Minister Dmitry Medvedev took part in the Asia-Pacific Economic Cooperation (APEC) Summit in Papua New Guinea that ended on 18 November.

"You asked on which side our country is. We are on our side, of course, on the side of the national interests of the Russian Federation… But there are positions that are closer to us… Of course, we are closer to the position that envisages not giving up the advantages of the WTO, keeping the framework of this organisation, trying to modernise it, preserving the basic principles of the work of WTO institutions, reforming the arbitration procedure," Medvedev stated.

According to the prime minister, this point of view is shared by the majority of countries but not all of them, for example, the United States, which believes that everything should be left as it is.

"I think such an approach is not very forward-looking," Medvedev noted.

Earlier media reported that this year’s APEC declaration had not been adopted because the participants couldn't agree on some controversial points such as the Bogor Goals, the World Trade Organisation (WTO), and trade practices.