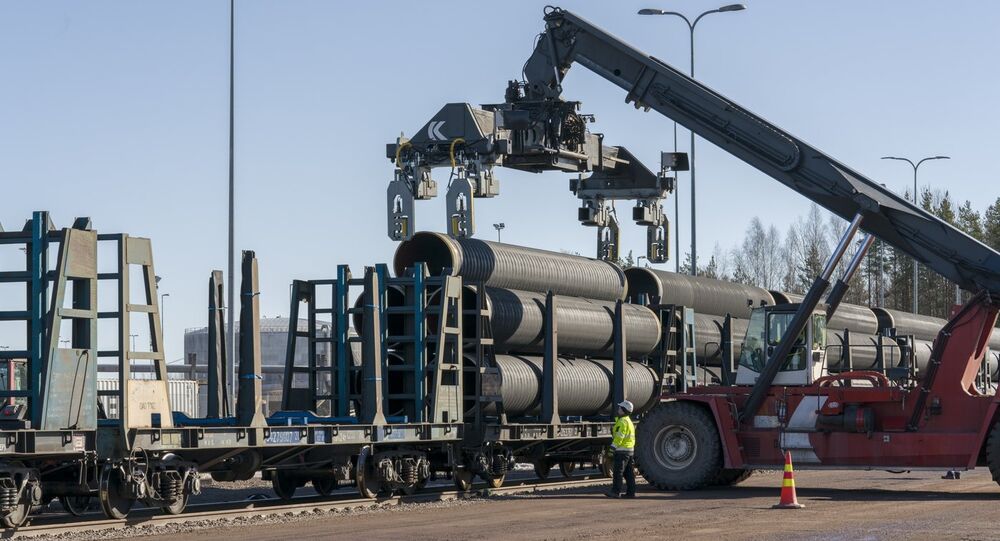 "US representatives have long been travelling across all European countries, explaining what political damage they will suffer if they suddenly agree to continue cooperation with us [Russia] in the gas sector, which is beneficial primarily for the Europeans themselves… But behind all this political pressure it is obvious that the United States is trying to promote its own gas, which is more expensive, to European markets," Russian Deputy Foreign Minister Alexander Grushko told reporters when asked to comment on Sondland’s statement.

READ MORE: Journo on Why German Business Does Not Fear Trump's Sanctions Over Nord Stream 2

The deputy foreign minister stressed that this was an example of using political means to achieve commercial benefits.

He added that there was everything necessary for the Nord Stream 2 project to be implemented, despite political pressure on the European Union.

"This is a purely commercial project. All the necessary contracts have been signed, work is underway, and we are confident that, given the economic feasibility of this project, it will be implemented," Grushko said.

The deputy foreign minister also noted that the European Union and Russia had been cooperating in the gas sector for more than 50 years.

"[This cooperation] has proved its viability and relevance for all Europeans," Grushko emphasized.

The official's statements come after US Ambassador to the European Union Gordon Sondland said on Tuesday that the United States had instruments that could slow down or even stop the Nord Stream 2 gas pipeline project.

Nord Stream 2
Gazprom CEO Confident Nord Stream 2 Pipeline Will be Completed Despite US Claims
Nord Stream 2 is a joint venture of Russia’s gas giant Gazprom and five European companies. It aims to deliver 55 billion cubic meters (1.9 trillion cubic feet) of Russian natural gas annually to the European Union via the Baltic Sea and Germany and is expected to be put into operation by the end of 2019. The pipeline project has been welcomed by some countries in Europe and opposed by others that feel it might increase their dependence on Russian gas.

The United States, which is seeking to promote its own liquefied natural gas in the European market, has made a number of attempts to impede the implementation of Nord Stream 2 and even incorporated a provision for counteracting the construction of the pipeline in its Countering America’s Adversaries Through Sanctions Act.

Russia has repeatedly stated that the Nord Stream 2 project was completely commercial and competitive, insisting that it did not imply that the transit of Russian gas to the European Union through Ukraine would be terminated.