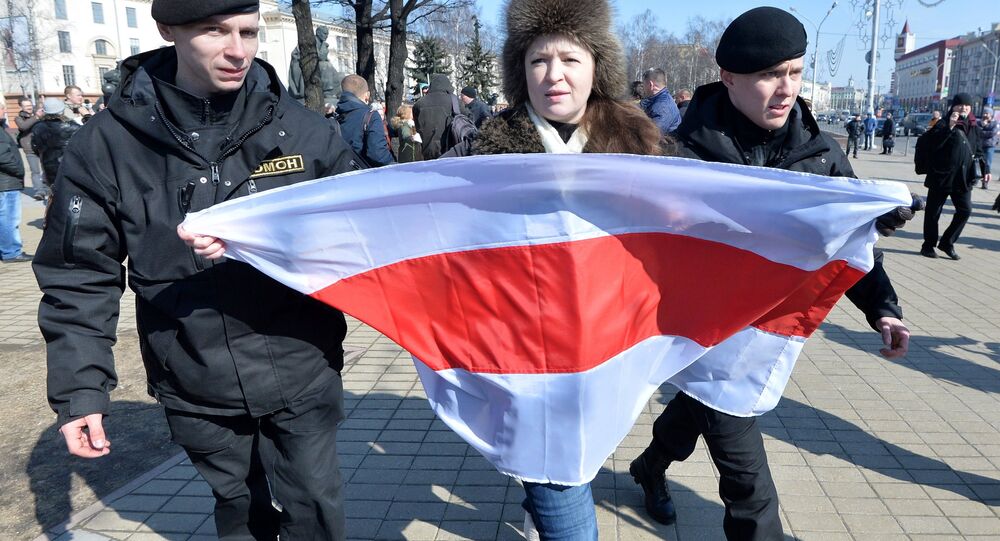 Tbilisi and Kiev have strained relations with Moscow and aspire to join the Western alliance, while Belarus is one of Russia's closest allies in the Collective Security Treaty Organization.

Former NATO Secretary General Anders Fogh Rasmussen has advised the Belarusian opposition to learn from the colour revolutions which rocked Georgia and Ukraine in 2003 and 2014 and led to a shift in those countries' policies vis-à-vis NATO and Russia.

Speaking to PolskieRadio, Rasmussen said that Belarus was currently "not a democratic state," and that Belarusians should "decide about their future" just as Georgia and Ukraine had done earlier.

"It's quite possible that we will see a growth of the opposition forces, which could oppose the authorities in Minsk, and I think this is the only possible way forward," the former official said, adding that Belarus could play a "very interesting role" if it joined Western institutions, given that it is situated between Europe and Russia.

© Sputnik / Egor Eryomov
Any Attack on Belarus to Be Viewed as Attack on Russia, Says Russian Ambassador
"There is no doubt that Putin will put pressure on Belarus," Rasmussen added, while calling Russian-Belarusian integration initiatives as a "threat." "We have already seen how Russia is pushing for bases and the permanent stationing of Russian forces in Belarus. This is a fact," he said.

Characterizing the current Belarusian government as a "problem," Rasmussen stressed that "of course, we need to reform Belarus before we move on," and that EU and NATO circles were interested in incorporating Belarus, pending reforms to turn the country's government into "a more democratic and free system."

Russia reiterated its commitment to Belarusian security last month, with Russian Ambassador to Belarus Mikhail Babich saying that any foreign aggression against Belarus would be seen as an attack on Russia. This week, Belarusian President Alexander Lukashenko said that Belarus and Russia would respond if Poland went ahead with plans to increase the presence of US forces on its soil, and that his country would need new weapons, including missiles, "if NATO continues to intimidate us" with its 'Fort Trump' plans. Lukashenko noted that he was satisfied with existing Russian-Belarusian defense agreements, and that he saw no need for a Russian military base in the country, with Minsk having the means to resist aggression.

© AP Photo / Czarek Sokolowski
Belarus, Russia Will Have to Respond to Polish Plans to Host US Military Base – Lukashenko
Ukraine's democratically-elected president was overthrown in a Western-backed coup d'état in Kiev in February 2014. In November 2003, Georgia faced similar unrest in the streets of its capital, Tbilisi, culminating in the overthrow of former President Eduard Shevardnadze and the coming to power of Mikheil Saakashvili. Saakashvili fled Georgia in 2013, and is wanted in the country on charges of embezzlement and overstepping his authority.
...
Reddit
Google+
Blogger
Pinterest
StumbleUpon
Telegram
WhatsApp
215

Any Attack on Belarus to Be Viewed as Attack on Russia, Says Russian Ambassador