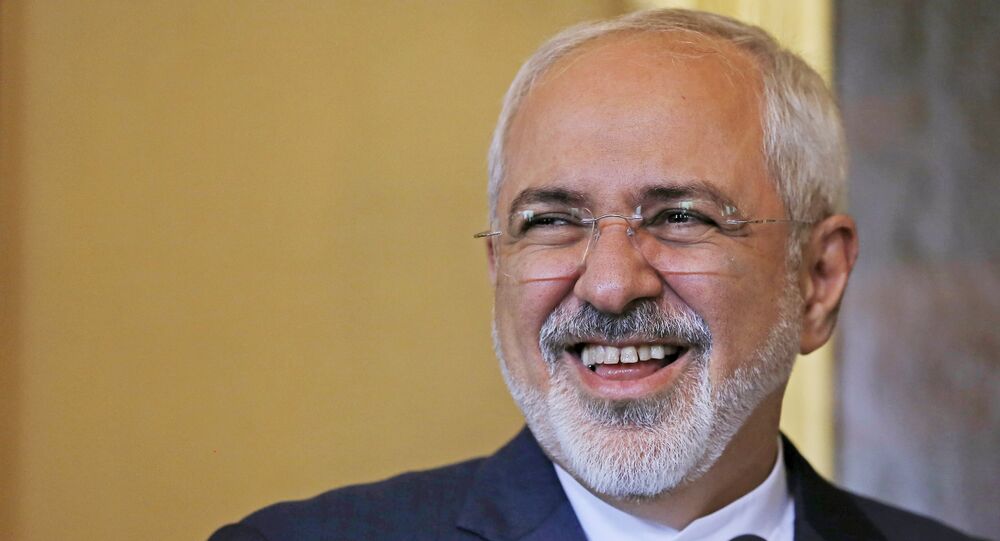 This week, the US imposed tough new sanctions against the Islamic Republic's energy and banking sectors, targeting both Tehran and its international partners through secondary sanctions.

Iranian Foreign Minister Javad Zarif has mocked the Trump administration following the imposition of new US sanctions against his country, pointing out that the new "toughest sanctions regime ever" ended up targeting an Iranian bank which closed six years ago, along with an oil tanker which sank off China earlier this year.

In a desperate PSYOP to amplify the list of sanctioned Iranian entities—unintentionally also proving it is #TargetingOrdinaryIranians indiscriminately—the U.S. designated a bank that was closed 6 years ago, and a ship that sank last year in a widely televised saga. #USisIsolated

Calling the US restrictions "a desperate PSYOP," Zarif wrote that they demonstrate that the US is targeting ordinary Iranians.

The bank Zarif was referring to was Tat Bank, a financial institution which closed in 2012 after the introduction of US sanctions that same year. As for the ship, this was a reference to the Sanchi oil tanker, which sank off China in early January with 32 souls onboard after colliding with a Chinese cargo ship.

© AP Photo / Carlos Barria
EU Guarantees for Trade With Iran Amid US Sanctions 'on Positive Track'- Iranian Diplomat
A US State Department spokesperson blew off the errors, telling reporters that they were "not going to respond to every public comment made by Iran's leaders."

Earlier Monday, Zarif tweeted that "US bullying" via sanctions was "backfiring," accompanying the tweet with a series of screenshots of news stories about European countries, Russia, China and others disregarding the new US restrictions. "The US — & not Iran – is isolated," the foreign minister insisted.

Today, US defied UN top court & Security Council by reimposing sanctions on Iran that target ordinary people. But US bullying is backfiring, not just because JCPOA is important, but because the world can't allow Trump & Co. to destroy global order. The US—& not Iran—is isolated. pic.twitter.com/206g1BFqbU

Washington unilaterally reinstated its energy and banking-related sanctions against Tehran on Monday, acting on an promise to do so made in May, when President withdrew the US from the Joint Comprehensive Plan of Action (JCPOA) Iran nuclear deal. Iranian President Hassan Rouhani promised that Iran would continue to sell its energy to foreign countries notwithstanding what he called the "illegal and unjust" restrictions imposed by the US.

© AFP 2021 / ATTA KENARE
India's Exemption From Anti-Iran Sanctions Result of 'Tough' Talks With US - Source
Following the US withdrawal from the JCPOA, the deal's other signatories, including Russia, China, and several European powers, began negotiations to save it, and have developed a number of measures to ease economic pressure on Iran stemming from direct and secondary US sanctions, including a Special Purpose Vehicle (SPV) on trade. Iran's largest energy partners, China and India, have promised to continue to buy Iranian crude oil despite US sanctions. On Monday, Washington confirmed that it had exempted the oil-importing countries of India, China, Italy, Greece, Japan, South Korea and Turkey, as well as Taiwan, from its new restrictions, despite earlier threats to bring Iranian oil sales down "to zero."
...
Reddit
Google+
Blogger
Pinterest
StumbleUpon
Telegram
WhatsApp
220