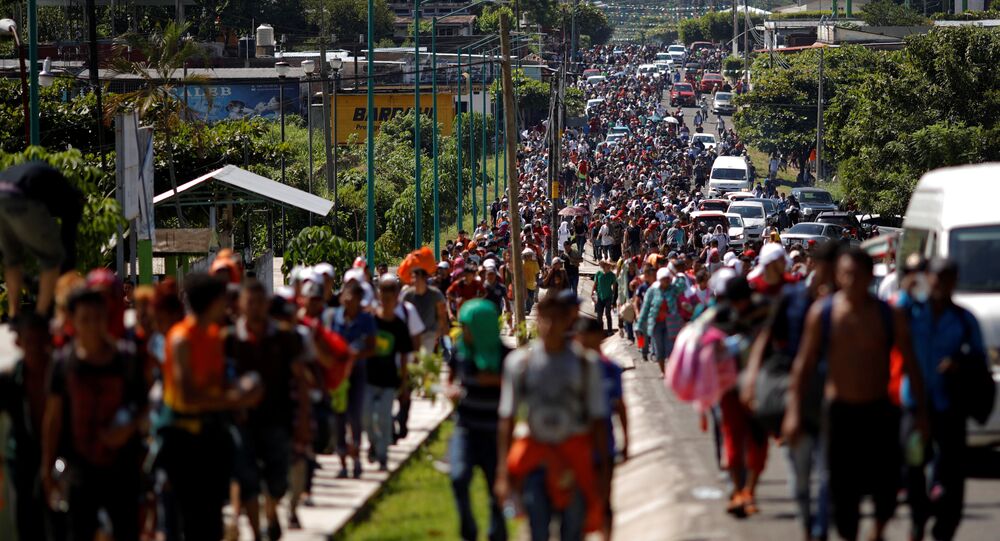 WASHINGTON (Sputnik) – US citizens and US government staff in Guatemala face an increased risk of crime and violent outbursts as migrant caravans transit the country en route to the United States, the American Embassy in Guatemala City warned in a travel alert on Thursday.

"The Embassy is monitoring ongoing caravans through Guatemala and remains concerned about increased risk of travel blockages, political instability, and criminal activity," the release of the embassy said. "Additionally, ongoing social disturbances, some violent, continue in the towns of Ixquisis, and San Mateo Ixtatan, in the department of Huehuetenango."

The towns cited in the embassy warning lie on the Guatemala-Mexico border, where migrants from two caravans have forced their way into Mexico during clashes with Mexican police on Sunday.

© AFP 2020 / ORLANDO ESTRADA
Migrant Caravan Approaches US-Mexico Border (VIDEO)
On Wednesday, US President Donald Trump said that 15,000 US troops could be deployed to the US-Mexico border to block the migrant caravan from entering the country; the figure is higher than the total number of US soldiers that are presently deployed in Afghanistan.

Donald Trump has made the threat of migrant violence a prominent issue ahead of Tuesday’s midterm elections and is deploying American troops along the US-Mexican border to prevent members of multiple caravans from eventually entering the United States, more than 1,000 miles from the Guatemala border.