Washington is using claims about Russia's alleged violations of the Intermediate-Range Nuclear Forces Treaty (INF) to cover up its own direct violations of the arms limitation pact, Russian Foreign Ministry spokeswoman Maria Zakharova has said.

According to the foreign ministry spokeswoman, Washington's talk about exiting the INF is an extremely dangerous step.

"This move is fraught with the serious risk of drawing entire regions of the world into an arms race. In this way, the situation around the treaty concerns not only Russia and the United States, but also other members of the international community," Zakharova said, speaking at a press briefing in Moscow on Thursday.

"On the whole we are getting the impression that Washington's movement toward exiting the INF is driven by a desire to ensure its own military superiority across the board and to guarantee a completely free hand for doing so," the foreign ministry spokeswoman added.

© Sputnik / Vladimir Rodionov
Hiroshima Mayor Urges Washington, Moscow to Comply With INF Treaty
Washington, Zakharova stressed, still hasn't provided any evidence about Russia's alleged violations of the INF Treaty's terms, which includes the prohibition of the development or deployment of ground-based missiles in the 500-5,500 km range.

"The attempts to shift the blame on Russia are totally unacceptable, and the American side still hasn't even bothered to present any intelligible evidence to support its claims." Instead, the US was "trying to cover up its own direct and obvious violations of the INF by making groundless accusations against us," she added, referring to the US deployment of dual-use missile defense shield components in Romania and Poland which can be armed with ground-based nuclear-armed cruise missiles.

Commenting on the results of Wednesday's meeting of the Russia-NATO Council, Zakharova said that Moscow had shown a maximum readiness to clarify any possible issues the US may have related to INF Treaty.

"Russia's representatives emphasized [at the meeting] that Moscow is invariably interested in ensuring the treaty's viability, is firmly committed to the INF and strictly adheres to its provisions. They also emphasized Russia's readiness for a comprehensive and speedy clarification of the issues which cause the US concern, and set forth our own concerns, accumulating over many years, regarding the observance of the treaty by the US side," Zakharova said.

Moscow, Zakharova said, remains prepared to work on maintaining the viability of the INF Treaty, which she admitted was "not perfect." "But to do so we need a reliable and interested partner…The solution to the problem can only be found through a frank, equal and constructive dialogue. We are counting on Washington finally coming to recognize this." 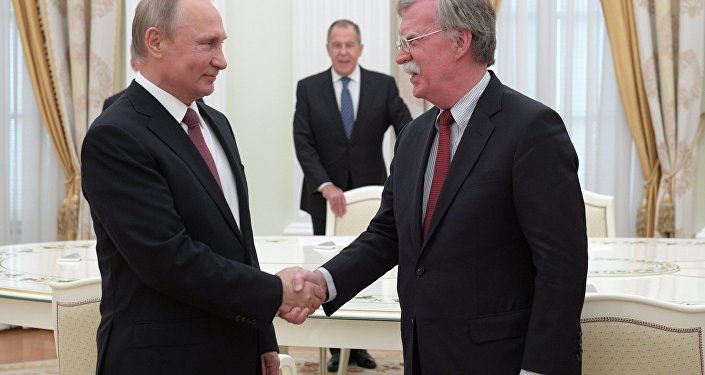 © Sputnik / Алексей Дружинин
'Did Your Eagle Eat All the Olives?' Putin Teases Bolton About US Coat of Arms
President Trump announced Washington's intention to terminate the Intermediate-Range Nuclear Forces Treaty last month, accusing Moscow of violating its terms. The treaty, signed between the Soviet Union and the United States in 1987 at the twilight of the Cold War, was aimed primarily at reducing the threat of nuclear war in Europe caused by intermediate range missiles' short flight time. In response to President Trump's talk of scrapping the treaty, the vast majority of Washington's European allies, including France, Germany, Italy, Spain and the Czech Republic voiced concerns. The UK offered support, however, echoing the US in accusing Russia of non-compliance with the INF.
...
Reddit
Google+
Blogger
Pinterest
StumbleUpon
Telegram
WhatsApp
351
Tags:
INF treaty, United States, Russia
Community standardsDiscussion
Comment via FacebookComment via Sputnik