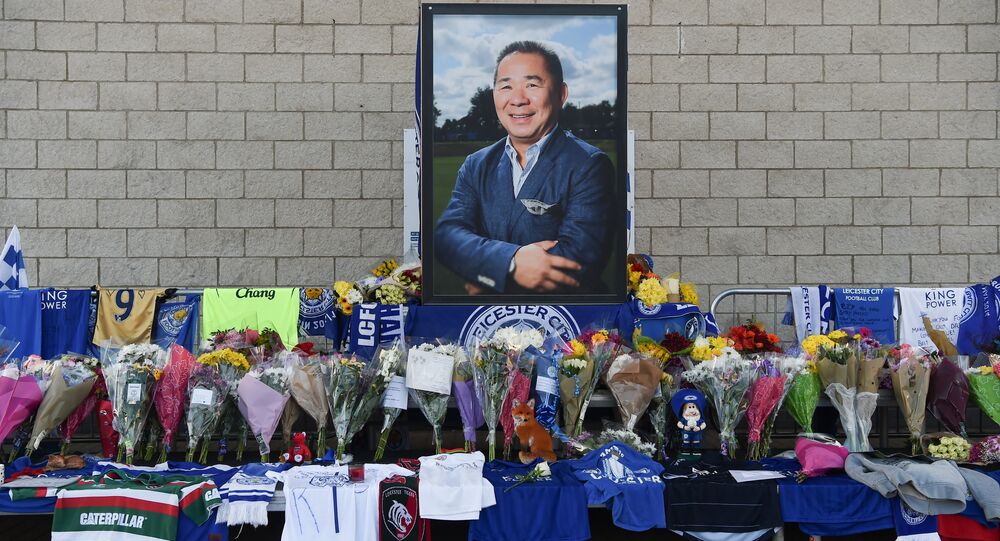 The billionaire owner of English Premier League side Leicester City was killed on Saturday night when his helicopter crashed in the stadium car park. Sputnik looks at other helicopter accidents which have hit the headlines and what turned out to be the causes.

Five people — including Vichai Srivaddhanaprabha — were killed on Saturday, October 27, when the chopper crashed in a ball of flames an hour after the end of Leicester City's 1-1 draw with West Ham at the King Power Stadium.

Leicestershire Police said that along with the owner of the club — which famously won the Premier League title in 2016 in one of the biggest sporting shocks in history — the crash also claimed the lives of two of his employees  - Nursara Suknamai and Kaveporn Punpare — pilot Eric Swaffer and his Polish girlfriend Izabela Lechowicz, who was also a pilot.

It is unclear what caused the accident although some one eyewitness, Ryan Brown, said the engine appeared to cut out and the Agusta Westland AW169 "was just spinning, out of control" before it crashed.

We would like to send our sincere condolences to the family of Vichai Srivaddhanaprabha and to the other families affected at this sad and tragic time.https://t.co/zefq12ngU4

Helicopters are generally safe but there have been a number of high-profile accidents over the years.

Miraculously the only people to be killed were the pilot Peter Barnes, 50, and  Matthew Wood, 39, who was killed by the falling helicopter as he walked in the street below during the morning rush hour.

The Twin Squirrel helicopter came down in a farmer's field in Cheshire and burst into flames after picking up Mr. Harding, 42, and his friends from a cup tie at Bolton Wanderers on a midweek evening.

22 years to the week, Matthew Harding lost his life in a helicopter crash and we hoped we would never ever hear a story like that again but sadly we have.

Vichai Srivaddhanaprabha was a brilliant man and my prayers are with his family and all at Leicester City.

Committees of inquiry blamed both mechanical failures and faulty instructions issued to the pilot, who had overloaded the craft.

He later served as Secretary of the Security Council under President Boris Yeltsin and was governor of the huge Krasnoyarsk region at the time of his death.

It was the worst single loss of life by the RAF since the Second World War.

But a fresh review found they were blameless and in 2011 then Defense Secretary Liam Fox apologized to the dead men's families.