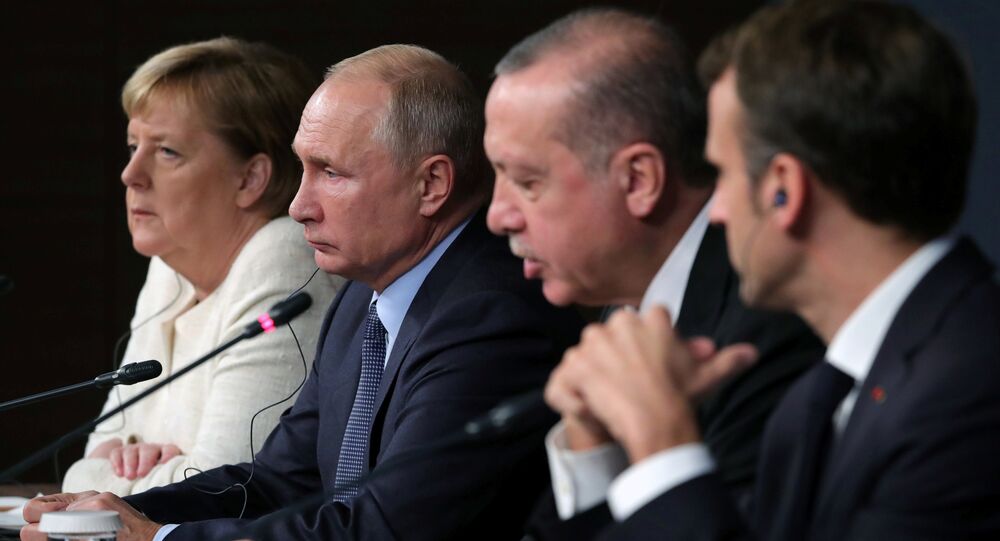 The leaders of France, Germany, Russia and Turkey met Saturday in Istanbul to discuss the current situation in Syria. The discussion has been followed by a joint communique. The leaders also commented on key points discussed during the meeting.

"The negotiations went in a business atmosphere," Putin commented after the meeting. "The joint communique reflects the intention of Russia, Turkey, Germany and France to further extend cooperation in order to normalize the situation in the Syrian Arab Republic, to launch an intra-Syrian dialogue and to conduct the necessary reforms and changes."

"We might have our differences but we have made an agreement and we have released a joint declaration, pointing out the fact that we have a strong and a common will," she told reporters.

Future of Syria is in the Hands of the People

"Syrians must determine the future of their country themselves," Putin said. He underscored that the summit participants have not discussed the future of Syrian President Bashar Assad.

"We have not discussed any personalities," Putin said. "This is counterproductive if we want to reach a positive result in the end of our way."

Erdogan made a similar, if slightly different, statement.

Merkel called for the Syrian people to decide their fate.

"We must advance with the political process at the end of which there must be free elections open to all Syrians — including those in the diaspora," Merkel said.

In a joint statement adopted at the end of the talks in Istanbul, the four nations "stressed the importance of a lasting ceasefire, while underlining the necessity to continue to fight against terrorism."

Following the press conference, Macron urged Russia to "pressure" the Syrian government to bring about a "stable and lasting ceasefire in Idlib."

"We rely on Russia to exercise very clear pressure on the regime which depends on it for survival," Macron said.

The Russian president said that Syria's liberation from terrorists is almost complete. He underscored that the terrorists' defeat must be total and final and that Russia reserves its right to help Assad destroy the terrorist threat should armed provocations continue.

"We cannot let the bandits with battle experience continue their criminal activity, create ‘sleeper cells' in our countries, to recruit new members and to propagate extremist ideology and terror," Putin said.

"Should radical elements try to prevent the solution of this task by conducting armed provocations from the Idlib zone, Russia reserves its right to offer active support to Syrian government actions aimed to eliminate this terror threat source," he added.

© REUTERS / Faisal Al Nasser
Merkel: EU May Make Joint Decision to Halt Arms Sales to Saudi Arabia Over Khashoggi Case
Putin praised the creation of a demilitarized zone in Idlib, but underscored that this is a temporary measure.

"We expect the Turkish side to ensure the withdrawal of the opposition, heavy weapons and the military from the DMZ," he said, adding that Ankara is fulfilling their obligations.

"This work is underway. Turkish partners are fulfilling their obligations, although not everything has been done in full. We see that this is a difficult job and we intend to continue to cooperate with Turkey in this area," he said.

The joint statement also called for a committee to be established to draft Syria's post-war constitution before the end of the year, "paving the way for free and fair elections" in the war-torn country.

All four leaders stated that they believe the new Syrian Constitutional Committee must meet for the first time before the end of this year.

"We expect that before the end of this year, if corresponding conditions are met, the Constitutional Committee would be completely agreed upon and functioning," Putin said.

"The Committee must be acknowledged as legitimate by all Syrian sides and enjoy their respect," Putin said.

© REUTERS / Ammar Abdullah
Germany Sees Buffer Zone in Syria’s Idlib as First Step to Ceasefire – Spokesman
Turkish President Erdogan outlined the issue of Syrian refugees, noting that Turkey alone accommodated an estimated 3.5 million Syrians, spending the equivalent of some $33 million to do so. Erdogan called upon the European Union to fulfill its obligations on financial aid to Ankara and to increase that aid, in view of the upcoming winter.

Putin offered to discuss the refugees issue at an international conference.

"We offered our partners [the opportunity] to support the Russian initiative to call an international conference on Syrian refugees," he said.

"We understand everything connected to this, all the problems, but if we don't work together, we won't achieve any results," he added.

"In order to significantly improve the situation in the country, remove sharp social issues, restore the economy, collective efforts of the entire international community are needed," the Russian president added.

Chancellor Merkel outlined a precondition for the return of Syrian refugees, that being a guarantee that refugees will not be prosecuted by Ankara.

"From our point of view, it is necessary that there be assurances that there will not be persecution or arrests, that certain fundamental humanitarian conditions are fulfilled — that a certain humanitarian infrastructure is there," she said.

"The Syrian government has provided hard guarantees of safety and non-discriminatory attitude to all who want to return to their homely hearths," Putin commented.

The joint statement also spoke of "the need to ensure humanitarian organizations' rapid, safe and unhindered access throughout Syria and immediate humanitarian assistance to reach all people in need."

While this was the first time that the four leaders have met in this format, it is unclear whether such meetings will become regular.

"We have not discussed it, but everything is possible," Putin said.

Putin added that he may see fit to increase the number of parties in the format, offering to call for Tehran to join.

"I believe that increasing the number of participants of the peaceful settlement process is beneficial," Putin said. "We, undeniably, should conduct full-fledged consultations with the Syrian government, as well as with other partners in Iran, who is, as we know, a guarantor nation of the peace process."

Western Media is Muffled by US Government on Syria - Professor