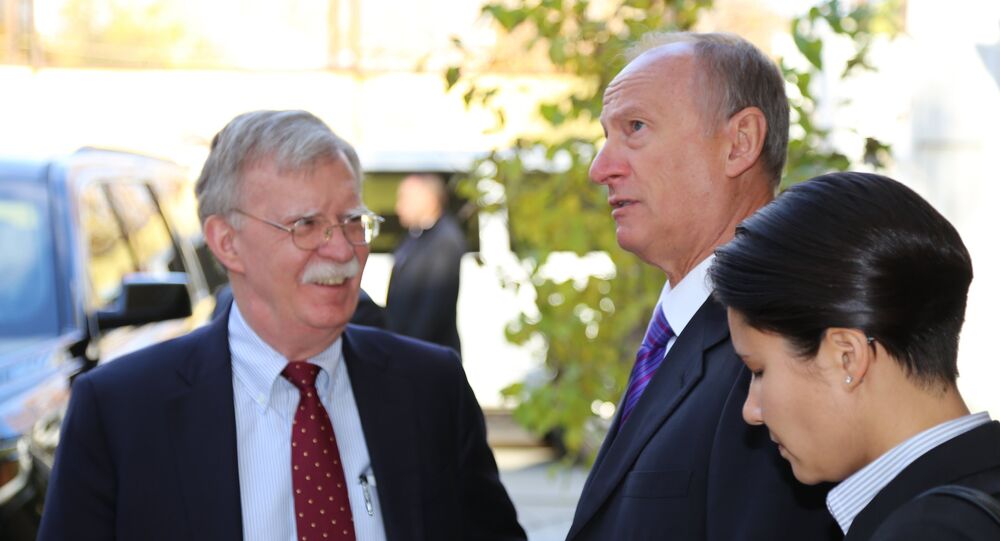 "In the context of US President Donald Trump's recent announcement of US intention to withdraw from the Intermediate-Range Nuclear Forces Treaty, the Russian side has again voiced its principal position on the importance of maintaining the treaty in force, and has also voiced its readiness to work together on eliminating the mutual claims related to the implementation of this treaty," the press service said in a statement.

The Russian top security official underlined that a possible US withdrawal might undermine the international security system.

"It has been emphasized that the termination [of the treaty] would be a heavy blow for the entire international legal system of non-proliferation and arms control," the statement said.

#Ryabkov: Russia expects that #US National Security Advisor John Bolton, who is arriving in Moscow on Sunday, will clarify Washington’s plans on the #INFtreaty

The talks took place days after US President Donald Trump announced that Washington mulled to exit from the treaty over the alleged Russian violations of the agreement.

Other Issues on Agenda

The sides also discussed extending the New START treaty by five years after 2021.

© Sputnik / Alexandr Vilf
Professor Warns New 'Nuclear Iron Curtain' May Be Created if INF Treaty Scrapped
The Russian Security Council said Patrushev and Bolton substantively discussed the Treaty on the Non-Proliferation of Nuclear Weapons (NPT), the Comprehensive Nuclear-Test-Ban Treaty (CTBT), the Open Skies Treaty, the Convention on the Prohibition of Chemical Weapons and the Convention on the Prohibition of Biological and Toxin Weapons.

The statement said the Patrushev-Bolton meeting was an important step to implement agreements reached during the talks between Russian and US presidents Vladimir Putin and Donald Trump in Helsinki.

"Nikolai Patrushev and John Bolton touched upon issues of further development of the situation around the Joint Comprehensive Plan of Action on the Iranian nuclear program, discussed the situation in Syria, Afghanistan and Ukraine, as well as the nuclear issue of the Korean Peninsula," the statement said.

The Russian Security Council noted that the meeting was held in a constructive and businesslike atmosphere. Both sides reaffirmed interest in the resumption of Russian-American contacts through the relevant ministries and security bodies in the area of combating terrorism, drug-trafficking and illegal migration.

Heading to Moscow tomorrow to meet with senior Russian leaders, including Foreign Minister Sergei Lavrov and Security Council Secretary Nikolai Patrushev, to continue discussions that began in Helsinki between our two countries.

In addition, Patrushev and Bolton voiced a number of initiatives whose implementation could contribute to promoting an atmosphere of trust and strengthening cooperation between Russia and the United States. They also agreed to continue the bilateral dialogue between the security councils of the two countries.