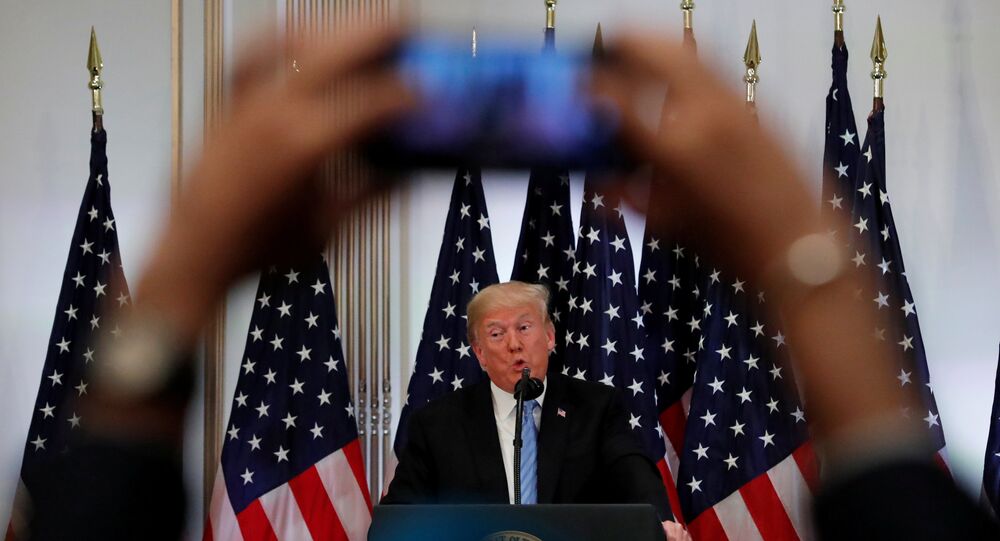 Riyadh called claims and accusations connected with the disappearance of Saudi journalist Jamal Khashoggi "baseless," vowing to find footage of him leaving the building he allegedly went missing in.

Turkey has denied Trump's claim about US investigators participating in the missing Saudi journalist’s case, according to reports.

A few hours later, Turkish presidential spokesman Ibrahim Kalin stated, as quoted by the Anadolu agency, that Turkey had accepted a Saudi proposal to form a joint working group to investigate the case of missing Saudi journalist Jamal Khashoggi.

"At the request of Saudi Arabia, a joint team on the investigation into this case has been created," Kalin said, as quoted by the NTV broadcaster.

Turkish Foreign Minister Mevlut Cavusoglu has promised to make public the results of an inquiry into the vanishing of a Saudi journalist in Riyadh's Istanbul consulate.

"We will share with the international community everything we will learn in the course of the investigation," Cavusoglu said in a televised announcement during a trip to Iraq.

Cavusoglu said that Turkish prosecutors were conducting a full-scale probe with the help of intelligence, police and security forces, and were cooperating closely with the Saudi mission, as the incident is thought to have occurred within its walls.

Trump: 'I Have to Find Out What Happened' to Missing Saudi Journalist

US President Donald Trump earlier stated that US investigators in Turkey would probe the case of Jamal Khashoggi, adding "I have to find out what happened."

He noted that he saw no reason to stop Saudi investments in the US despite the journalist's disappearance, adding that Washington was expecting a report on the columnist soon.

When asked whether he would consider halting arms sales to the kingdom, Trump said, "Not in favor of stopping a country from spending $110 billion, which is an all-time record and letting Russia have that money… There are other things we could do."

The US president has stated previously that his administration was very concerned about what happened to the journalist and is determined to find out who was involved in his disappearance.

According to the US media reports, Turkish investigators believe the journalist was murdered inside the Saudi Consulate. Saudi Arabia has denied the allegation, saying that the journalist left the consulate building.

© AP Photo / Lefteris Pitarakis
Saudi Journalist's Disappearance Should Prompt US to Halt Arms Sales - Senator
In an earlier interview with Fox News, Trump expressed reluctance to halt arms sales to the kingdom, saying such a move would hurt the US defense industry.

On October 10, the White House said in a press release that US National Security Adviser John Bolton and Senior Adviser Jared Kushner had spoken by phone with Saudi Crown Prince Mohammed Bin Salman about the disappearance of Saudi journalist Jamal Khashoggi.

More than 20 Republican and Democratic lawmakers have invoked the Global Magnistky Act to instruct the Trump administration to investigate the journalist's disappearance. Other lawmakers have demanded a halt to US weapons sales to the kingdom in response to the incident.

His fiancee explained that the journalist had been invited to the Saudi Consulate in Istanbul to get documents needed for his forthcoming marriage. The fiancee stayed outside waiting for Khashoggi for several hours before being told by one of the Consulate General's employees that her fiance had already left. She has not seen him since.