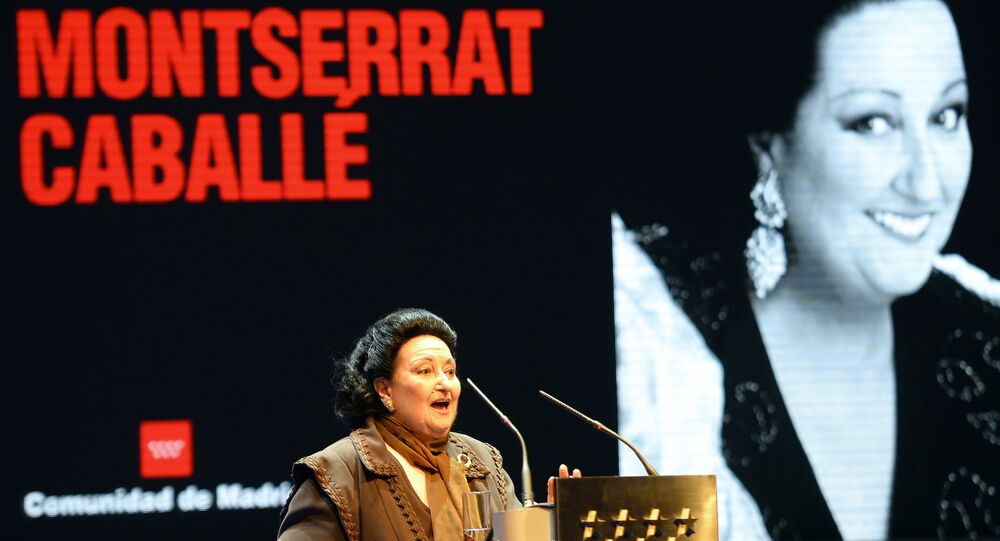 Caballe, who turned 85 in April, had been suffering from ill health for years after having a stroke in 2012.

According to La Vanguardia newspaper, legendary opera singer Montserrat Caballe died at the age of 85 the Hospital de Sant Pau in Barcelona in the early hours of Saturday.

It emerged on September 24 that Caballe had been hospitalized due to gallbladder problems. Several days later, Europa Press reported that she was feeling better and was looking to return home.

Her funeral will take place in the funeral home of Les Corts on Monday.

The iconic soprano has been having health issues in recent years. In 2012, the Spanish opera diva suffered a stroke while in Russia, which caused her to feel dizzy and fall over, leading to a humerus rupture.

Spanish Prime Minister Pedro Sanchez has expressed his condolences over the death of Spain's national treasure, praising Caballe as "the great ambassador of our country" and "the international acclaimed" opera soprano. "Montserrat Caballe, her voice and her gentleness will stay with us forever."

Catalan President Quim Torra, in turn, vowed to pay a posthumous tribute to “one of the most significant voices of the twentieth century.”

Tributes have been pouring in online from around the globe since the devastating news broke.

Rest in peace, Montserrat Caballé, and may you be reunited with Freddie again for your heavenly debut. 😔 — feeling sad

I'm deeply saddened for the passing of Montserrat Caballé my thoughts are with her family and friends. RIP

Sad day, RIP #MontserratCaballe. One of the greatest ever.

Caballe was considered one of the biggest stars on the international opera stage. She made her professional debut in 1956 and came to international prominence in 1965, when she replaced the ailing Marilyn Horne for a the title role in Donizetti's Lucrezia Borgiain at a Carnegie Hall performance. Caballe was also part of a famed duo with her daughter, Spanish opera singer Montserrat Marti.

Caballe has sung in a plethora of roles, including in classical Italian operas by Rossini, Bellini, and Donizetti, and was probably best known for her exceptional technique of Bel Canto singing. One of the highlights of her six-decade-long career was Barcelona, a hit duet with Freddie Mercury, which was featured at the 1992 Summer Olympics.