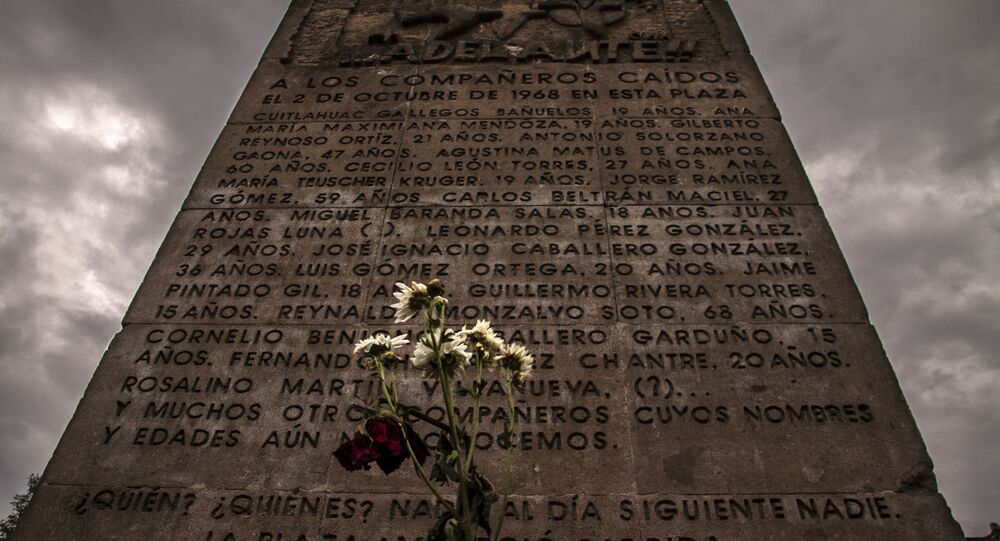 Sputnik presents testimonies of witnesses to one of the greatest crimes in Mexico’s modern history: the attack on the student movement on October 2, 1968.

There were only a few days left until the opening of the 1968 Olympics and there was intense student agitation in the country. The echoes of the events of May, 1968 in France resounded in university classrooms and the movement, centered at the National Autonomous University of Mexico (UNAM), had spread throughout the country.

That day, the government of Gustavo Díaz Ordaz unleashed a brutal repression, which, according to estimates, resulted in 30 to 40 deaths. 50 years later, the Executive Commission of Attention to Victims (CEAV), under the Ministry of the Interior of Mexico, acknowledged that the massacre had been a state crime.

According to eyewitness accounts, the supposedly "coordinated" operation of the law-enforcement agencies was, in fact, chaotic and disorganized. Eyewitnesses say that the army didn't arrive while firing at the crowd, but instead responded to an armed attack by the Olimpia Battalion paramilitary group, which was posing as civilians. The group, which origin and command are still unknown, was firing at the square from the surrounding buildings.

On October 2, the third student demonstration was held in the Plaza de las Tres Culturas after two months of conflict. The place received its name because it is home to the pre-Hispanic ruins of Tlatelolco, a city-state founded by the Mexicas, and the church of Santiago Tlatelolco from the colonial era. The triad is completed by the huge Nonoalco Tlatelolco housing complex, which houses hundreds of working class families.

Apart from students, many residents were in the square on the day of the demonstration, as well as some passers-by.

"The government's objective was to imprison the members of the National Strike Council (CNH) in order to bring down the student movement. The Olympics were very close and the nervousness forced Gustavo Díaz Ordaz to send the army to the Plaza," Adolfo Palma, who was in the Plaza on October 2, 1968, explains.

Created on August 2, 1968, the CNH brought together student representatives from the universities and schools that participated in the struggle; it had a broad, collegiate structure composed of more than a hundred young people.

The organization had been the target of military actions prior to the attack in Tlatelolco, when the army took control over three main student buildings of Mexico City occupied by the CNH: the University City of the UNAM, on September 18, and both buildings of the National Polytechnic Institute, on the 23 and 24 of the same month.

Despite these three large deployments, the government hadn't been able to stop the CNH members. It was only on October 2 that they managed to achieve their goal.

"At 7pm they have all been already imprisoned together with many others who were not from the Council," Palma stresses.

"I was in the Plaza that day. I went to the demonstration as the CNH member, and on San Juan de Letrán, I saw that soldiers and tanks had arrived. The same was for Calzada Nonoalco (today Ricardo Flores Magón Avenue) and the Avenida [Avenue] Manuel González. The army occupied the three streets and rounded up the demonstrators," Palma recalls. By 5pm, the troops had been deployed in the Plaza.

"When David Vega from the CNH, who would be the last speaker of the afternoon, was talking, two helicopters flew over us and dropped two flares: a green and a red one. We couldn't understand what was happening, but then I saw them shooting from the Chihuahua building towards the Plaza. When I turned around, I saw the avenue full of tanks," Palma says. It was 6:10pm.

"The soldiers came down from the trucks and marched towards us with their rifles. One's instinct is to run, but I walked against them, I only had a scratch from one of their bayonets," Palma recalls.

He passed through the soldiers and crossed the Avenida San Juan de Letrán, where he took refuge in the Acapulco bakery. Palma remembers having noticed the smell of alcohol when passing by the soldiers.

The armed attack lasted between 40 minutes and an hour. Palma was 24 and was a month away from being an aeronautics engineer and a graduate of the School of Mechanical and Electrical Engineering (ESIME). However, he didn't finish his studies. He was married and had a daughter waiting for him at home. That was his biggest concern, to return to his family to tell them that he was fine.

"I always lived near Tlatelolco and when I was walking back home, I was arrested by two police officers who took me to a detention unit that at the time was already full of people," Palma recalls. However, he was lucky, as one of the police officers recognized him and let him leave.

© Photo : Eliana Gilet
The body of a student in Tlatelolco, October 2, 1968. Part of the Heraldo Gutiérrez Vivó-Balderas Archive of the Universidad Iberoamericana (AFHGV, núm 1905) / Police in front of the Parroquia de S

The Chihuahua building, like others of the Nonoalco Tlatelolco housing unit, has an esplanade every third floor where the elevators arrive. The third floor balcony faced the square where people had been gathered since 5pm.

"The plaza is not very big and, apart from the students, there were also local residents and neighbors. Before the demonstration, I decided to go up to Chihuahua to get a better view of the event. There were guards at the entrance, but they let me in as I was a journalist," Francisco Ortiz Pinchetti says. He was 24 and newly married at the time, working as a journalist.

On the balcony Ortiz met Oriana Fallaci, an Italian journalist who had come to cover the upcoming Olympics, as well as the deputy director of his own magazine.

"I remember that Oriana herself mentioned the calm that day. The previous day, she had spoken to the police chief, who told her there would be no problems," Ortiz says.

It was planned that everyone would safely return home after the demonstration. The journalist recalls that the atmosphere was even "a bit festive." No one realized that there would be any kind of repression, because that morning, government authorities had met three CNH members.

Tension arose on the square with the arrival of the helicopters. "We saw two flashes of light, then two helicopters flew overhead, but the flares were not from there," Ortiz says. The speaker asked the crowd to calm down, but people started running towards the Chihuahua building.

"It was at that moment that we realized there were armed people dressed in civilian clothes," the man recalls. Those people went up to the third floor, where Ortiz was.

"They imprisoned all of us. They were insulting us, calling us ‘wretches, traitors and communists.' They threw us all in front of the elevator doors," he says.

They were wearing a white glove or a white handkerchief, which identified them as part of the same group.

Ortiz estimates that some 200 people were in the Chihuahua building that day. The area looked like a warzone, as the shots had perforated the water tanks, so there was water everywhere.

A photographer took him to the Excelsior newspaper's editorial office, where Ortiz realized he had been shot in the leg. The doctor who treated him removed almost all the bullet fragments, except for one that is still inside his body.

Ortiz was asked to write a chronicle of the events. However, it was only published in 1988.

As for the number of victims of the massacre, Ortiz refers to a document that says there were 38 dead, plus a 12-year-old boy that was found dead on the second floor of the Chihuahua building, as well as four soldiers from the 44th Infantry Battalion. The names of those killed were inscribed on a tombstone in the Plaza of the Three Cultures.