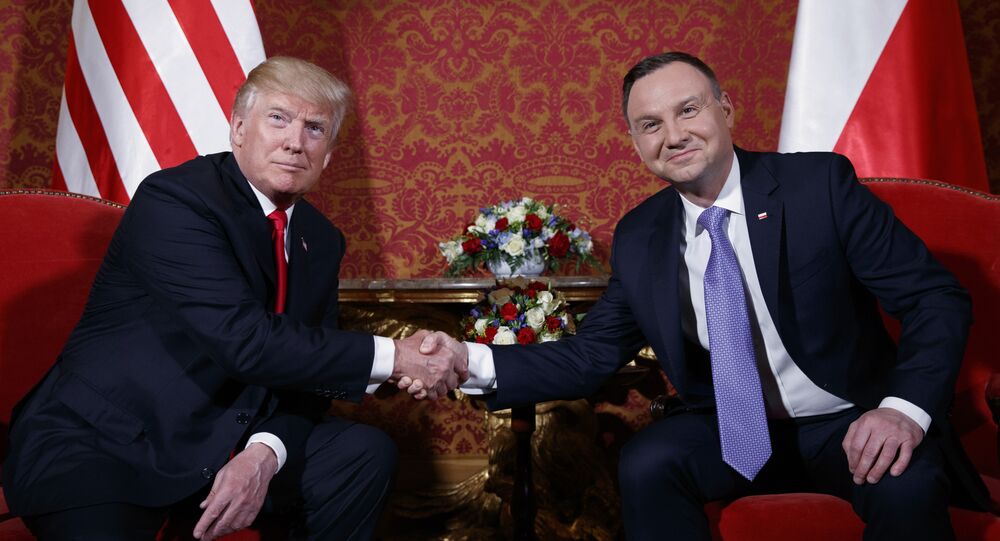 WARSAW (Sputnik) - Polish President Andrzej Duda said in an interview with the Sieci newspaper on Monday that his suggestion to Donald Trump to allocate $2 billion for the creation of a US military base in Poland got the attention of his US counterpart and excited him.

Duda told the outlet that he first floated the idea of establishing a permanent military base with Trump on the sidelines of a NATO summit in July.

"I then said: 'Mr. President, we would like to have a permanent US base in Poland.' He nodded his head but didn't react. But when I added: 'But we are ready to allocate $2 billion to prepare it,' I saw his eyes shine," Duda said.

He added that it became "a different kind of talk" after that.

Duda noted that Poland aimed at shifting the "security border" in Europe thanks to the US troops.

"US bases have proved to be a peace guarantor. Just recall the years of the Cold War, during which they showed their stabilizing power. This is how it was in Western Germany that resisted the pressure from the east with [US] help," the Polish president stated.

© AP Photo / Susan Walsh
Joke About President Duda Gets Polish TV Employee Fired – Reports
He recalled that since many European countries enjoyed the US military presence, he considered it necessary to expand this presence and make it permanent.

On September 18, US President Donald Trump said at a meeting with Duda that the United States was "considering" establishing a base in Poland.

During the September meeting, Trump said Duda had offered to give more than $2 billion toward the cost of the facility. The Polish president also suggested naming it "Fort Trump."