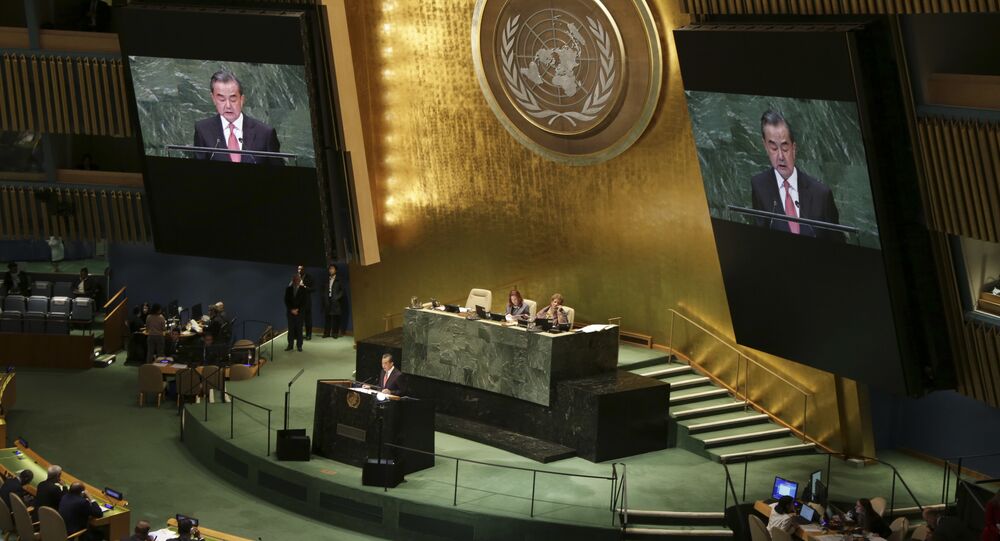 China's Foreign Minister Wang Yi gave a strong rebuttal to Donald Trump's trade agenda on Friday, warning that Beijing's relationship with the US could break "like a glass."

"Protectionism will only hurt oneself, and unilateral moves will bring damage to all," Wang Yi said, as quoted by Reuters, addressing the UN General Assembly. Beijing "will not be blackmailed or yield to pressure," he added.

Following his statement, some people rushed to Twitter to claim that China was picking up the mantle the US has shed.

America is losing global dominance, and fast. They never had total domination, but it hasn't stopped growing until now.

What happens if China call their loans? China owns $1.18 trillion of US debt.

Others accused Wang Yi of hypocrisy and claimed that Beijing was playing the victim card.

The thief playing the victim…#badnarrative

Hypocrite to the max. What about China blackmailing less developed countries?

The minister's comments come at a time when relations between China and the United States are particularly strained. This week, US President Trump claimed at the world's highest-profile gathering in New York that Beijing was attempting to meddle in the forthcoming November midterms in the US.

Although Chinese officials, including Wang Yi himself, vehemently denied the allegation, it added fuel to mounting US-China tensions over diplomacy and trade. On Thursday, China's Defense Ministry said that the country was "resolutely opposed" to  US military aircraft taking provocative actions in the South China Sea and demanded that Washington take steps to improve military relations.

Earlier this week, China also hit back at Donald Trump's $200 billion of new tariffs with its own levies on $60 billion of American products.

Trade between Beijing and the US went into a downward spiral of tit-for-tat measures ever since Donald Trump announced import tariffs on steel and aluminum, citing national security concerns. In addition, he accused China of what he called "unfair trade," including its alleged state-led efforts to steal US technology and intellectual property as well as "discriminatory technology licensing practices."