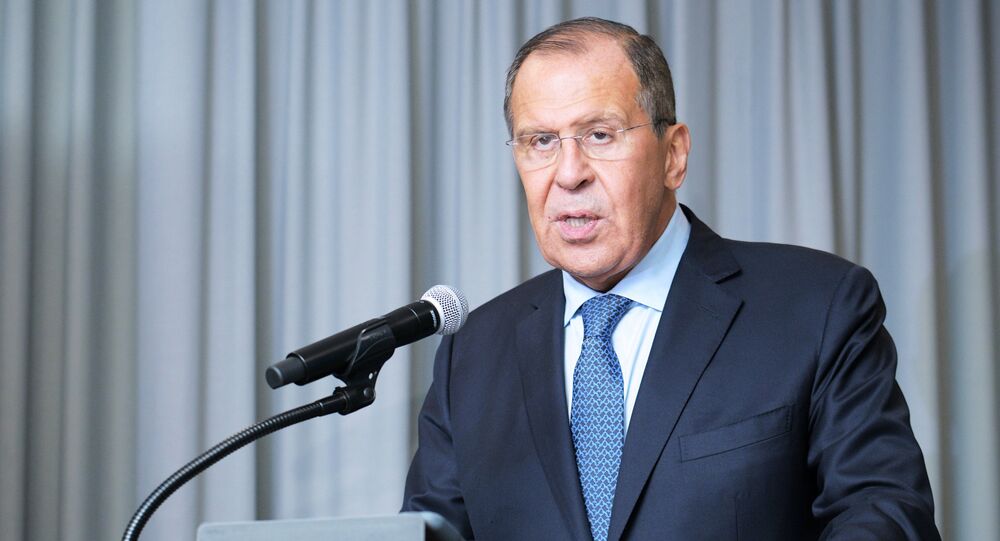 Russian Foreign Minister Sergei Lavrov has spoken to the press on the sidelines of the 73rd UN General Assembly.

Fate of Nusra terrorists in Idlib.

When asked about the fate of Nusra front terrorists, Lavrov said Turkey has taken obligation to separate the opposition ready to engage in political process from Nusra front. Addressing the concerns that the terrorists might be moved to other points in the world, Lavrov said that terrorists must be either eliminated or prosecuted by court, he underscored.

"This [transfer to other areas] is all unacceptable and terrorists must be eliminated, or they must be punished and brought to justice. How to do this? This will have to be solved as the situation develops. No one claims that this agreement, which was reached in Sochi, put all things right, and will once and for all now be the road map to the final solution to this problem," Lavrov told a press conference.

"We won't allow the repetition of Raqqa scenario," he said.

Talking about the adoption of new Syrian consitution, Lavrov underscored that the statement of the so-called Small Group on Syria that calls for the immediate creation of Constitutional Committee is a "big mistake." He explained that, while such Committee must be created, it should not be rushed.

"The small group on Syria, which recently met — four Western and three Arab countries —adopted a statement that requires immediate commencement of the work of the constitutional committee. We know that this means that they are trying to force Staffan de Mistura to go out and declare ‘here is the committee, by decree of myself I create it, and it will have such a composition.’ That would be a big mistake," Lavrov said.

Balance of Interests in Middle East

Commenting on the prospects of international relations in the Middle Eastern region, Lavrov said that he doubts that isolation of Iran within its borders is possible. Instead, he called on development of dialogue that will consider interests of all regional powers, including Iran, Saudi Arabia, Qatar and other nations.

The countries participating in the nuclear deal with Iran, except the United States, have agreed create a mechanism to circumvent Washington's sanctions. Russian experts were "also taking part" in the establishment of such a mechanism, he added.

Speaking about international trade, Lavrov noted that there is a process underway to get rid of dollar dependecy in favor of national currencies. This process will eventually lead to weakening of the United States, he said.

"As soon as the United States began to abuse the position of the dollar in the global monetary and financial system, of course, all countries that at least a little cared about their future, began to look for ways to avoid such dependence. So this process will go on, and it will eventually weaken the United States and its influence," Lavrov told a press conference.

He noted that this was a natural thing.

"The use of national currencies in payments in order not to depend too much on the dollar is an idea that has long been implemented, and is being applied in practice in our relations with China and other countries," Lavrov added.

Relations With Iran and Turkey on Syria

Speaking about Russia's cooperation with Iran and Turkey in Syria, Lavrov noted that while Russia's goals do not necessarily coincide with those of Ankara and Tehran, the three countries are nevertheless allies in fighting terrorism.

"Our goals do not coincide 100 percent — probably even less than that — with those of Iran and Turkey when it comes to Syria. But at this stage we are allies in the fight against terrorism and preserving Syrian integrity and helping the Syrian people in order to create conditions for an inter-Syrian political dialogue and let them determine their own fate. I think the Astana format of cooperation is very useful," he said.

Commenting on allegations of Russian and Chinese meddling in foreign elections, Lavrov underscored that such allegations must only be presented through facts.

"We are the last nation to be interested in anyone meddling in anyone else's internal affairs," he said.

"If we are talking about meddling in general, you know, we have a million examples of how the United States openly, without hesitation, demanded a particular government to take a particular position," Lavrov added.

As an example of meddling in other nations' internal affairs, Lavrov noted that US representative on Ukraine Kurt Volker not only undermines the implementation if Minsk Agreements, but also calls on Russian people to get "inspired" by Ukrainian scenario. He also pointed out that European leaders openly call on Macedonia to make a choice in favor of joining NATO and changing their coutry's name.

"[US President Donald] Trump, by the way, said that he firmly stands for the sovereignty of every country in the world, I strongly support it… But on the other hand, if the United States is committed to sovereignty as a fundamental principle, it probably should not interfere in the affairs of other countries," he stressed.

The deliveries of Russian advanced weapons to Syria has already started, Lavrov said. This measure has been taken in order to ensure one "hundred percent safety of Russian servicemen in Syria," he noted.

Russia doesn't believe there should be any artificial deadline on elections in Libya. As with Syria, the elections must be held when all political parties in the country come to an agreement.

Acknowledging Neo-Nazism tendencies in various nations of both Eastern and Western Europe, Lavrov noted that Russia repeatedly calls on implementation of ban of heroisation of Nazism. However, the EU unequivocally denies this initiative, calling it violation of freedom of speech, he said.

Relations Between Russia and the US

The relations between the two states are at its lowest at the moment, Lavrov said. However, he noted that the meetings between Russian and US Presidents were productive. He also praised the recently set-up dialogue between Russian and US National Security Advisors Patrushev and Bolton. Dialogue between US and Russian military officials is key to avoid "unpleasant incidents," he said.

He also pointed out that Russia is getting ready for a legal battle with the United States over its closed consulates and seized diplomatic property but is open to compromise.

“As for our legal action, we are finalizing a lawsuit that we will file with US courts. We have hired attorneys and we want to go to US courts first. We understand it won’t be an easy way to go but we are also open to an out-of-court settlement by mutual agreement if the US suddenly decides to stick to its international obligations,” he told reporters.

Lavrov said he agreed with China's point of view that restrictions imposed on North Korea should be lifted.

"I have positive attitude toward what my [Chinese] counterpart Wang Yi said about the need to encourage progress in the negotiations on the denuclearization of the Korean Peninsula and to ease sanctions pressure," Lavrov said.

"Any sort of unilateral sanctions are not only illegal but also counter-productive, including for those who impose them. They won't have any effect if the country you are dealing with has any amount of self-respect, if it respects it traditions and its people," he said.

Russia is ready to mediate improvement of relations between Israel and Iran, Lavrov told reporters.

"We have been promoting the concept of a security system in the Persian Gulf for many years. We are in favor of establishing such cooperation… If we are perceived by both sides [Iran and Israel] as a convenient platform where they could meet, we will be only happy," Lavrov said.

Lavrov denied knowledge of any suspension of agreements with India in the defense industry sector.

"As for commercial contracts that are being discussed in other [military] spheres, I have no information on any deadlines or proposals to delay or freeze anything," he told reportes.

A Russian newspaper, Izvestiya, cited sources who claimed India had delayed on payments for most of Russian arms deliveries due since last April. They blamed the delay on US sanctions on Russian weapon-makers.