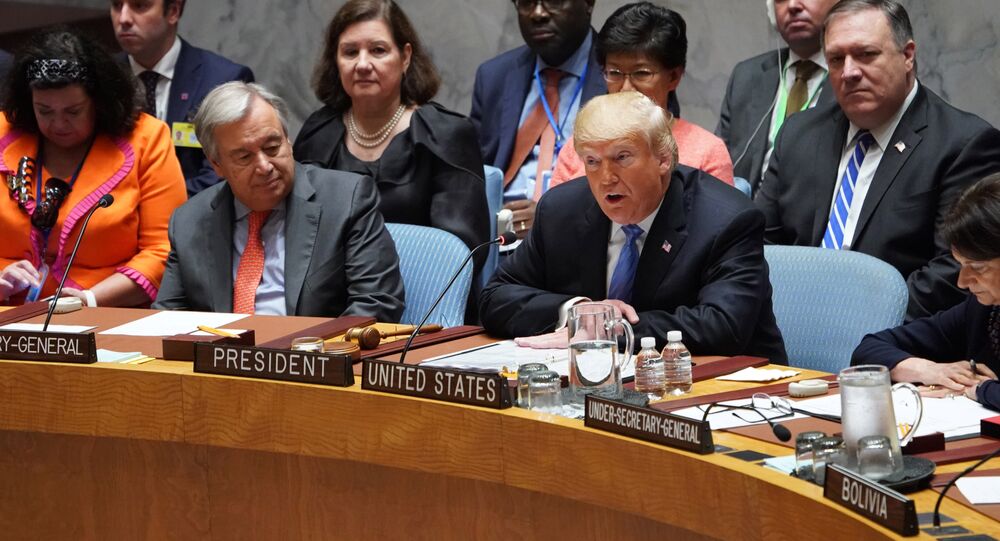 In his speech at the UN, US President Donald Trump blamed Tehran and Moscow for the "butchery" of the Syrian government. At the same time, he thanked Russia, Iran, and Syria for "slowing down" the offensive operation in Idlib.

"I want to thank Iran, Russia and Syria for at my very strong urging and request substantially slowing down their attack on the Idlib province," Trump said.

The US president expressed his hope that they would get the terrorists in Syria, adding, however, that the restraint of the attack should continue, as "the world is watching."

Trump addressed the recent decision of Moscow to strike a deal with Turkey to avoid a full-scale military operation by the Syrian army against the rebel-held city of Idlib.

Following the recent escalation of tensions between the US and Iran, Trump said that the sanctions against Tehran would be "tougher than ever before".

He also criticized Iranian nuclear program, urging the international community to control Tehran on the issue.

"I ask all members of the Security Council to work with the United States to ensure the Iranian regime changes its behavior and never acquires a nuclear bomb," Trump said.

The US President also claimed that Beijing was “attempting to interfere” in the 2018 US midterm elections due to its opposition to American trade policy.

"Regrettably, we found that China has been attempting to interfere in our upcoming 2018 election coming up in November against my Administration," Trump said. "They do not want me or us to win because I am the first President ever to challenge China on trade."

Following the speech, he also claimed that China was reportedly placing its propaganda ads in Iowa newspaper made to look like news.

In response, Chinese Foreign Affairs Minister Wang Yi rejected these accusations, stating that Beijing would not interfere in any country's domestic affairs.

In November, US voters will go to the polls for the midterm elections to pick candidates to fill 435 seats in the House of Representatives and roughly a third of the 100 seats in the Senate.

Earlier this month, Trump suggested that the US was not in a rush to strike a trade deal with China. The statement came shortly after China added tariffs on $60 billion worth of US products as a response to the US imposing 10% tariffs on $200 billion worth of Chinese goods starting from September 24.

In addition, the US president addressed the situation with North Korea, urging all countries to stick to the international sanctions against Pyongyang.

"We have detected that some nations are already violating these UN sanctions. This includes illegal ship-to-ship transfers, which must end immediately," he said.

Despite the stance on sanctions, Trump previously announced that he would be holding another summit with North Korean leader Kim Jong-un. Commenting on the issue, Secretary of State Mike Pompeo confirmed that preparations are underway and noted that the summit is more likely to happen after October, adding that no date or location for the meeting had been determined.

The World Laughs at Donald Trump